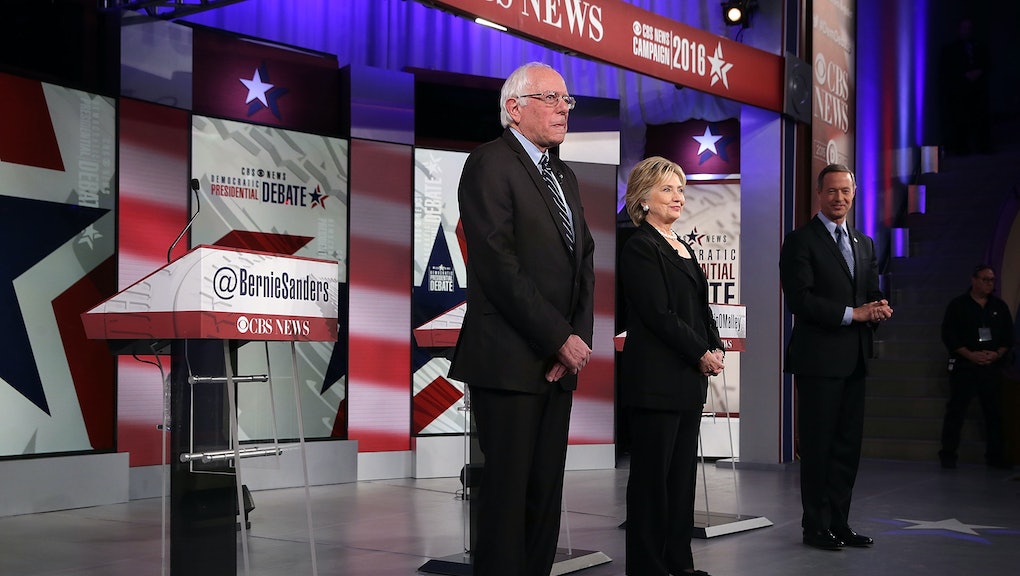 The three Democratic presidential candidates sparred over contentious political issues in Des Moines, Iowa on Saturday night during the party's second primary debate. Disagreements on foreign policy in the wake of terrorist attacks in Paris, handling the corruption on Wall Street and a Twitter call-out made for a fiery two-hour event.

Here are a few highlights from the night:

Clinton gets called out on Twitter: When Sanders brought up skepticism behind Wall Street's generous donations to Clinton's campaign, she said the investment banks fund her campaign because she "spent a whole lot of time and effort helping them rebuild" in the wake of 9/11.

Later in the night, moderator and Face the Nation host John Dickerson asked Clinton to respond to this tweet, which was projected on the stage's backdrop:

"Well, I'm sorry that whoever tweeted that had that impression because I worked closely with New Yorkers after 9/11 for my entire first term to rebuild," Clinton said. "And so yes, I did know people. I've had a lot of folks who give me donations from all kinds of backgrounds, say, 'I don't agree with you on everything, but I like what you do, I like how you stand up, I'm going to support you.'

O'Malley gets sentimental about politicians honoring soldiers: When asked how he'd handle the Iraq War with relatively little foreign policy experience, O'Malley shared a personal story, encouraging politicians to be mindful of their language choice when referring to American soldiers risking their lives in Iraq as "boots on the ground."

"I wanted to add one other thing, John, and I think it's important for all of us on this stage," O'Malley said. "I was in Burlington, Iowa, and a mom of a service member of ours who has served two duties in Iraq said, 'Governor O'Malley, please, when you're with your other candidates and colleagues onstage, please don't use the term 'boots on the ground' ... My son is not a pair of boots on the ground.'"

Sanders is still "sick and tired" of Clinton's "damn emails": After Sanders' now famous quote, "The American people are sick and tired of hearing about your damn emails!" (referring to Clinton's email scandal) earned him a loud applause at the first Democratic debate, he reaffirmed that position Saturday night.

When asked whether he's changed his stance on the issue in light of a recent comment to the Wall Street Journal that Clinton's email scandal said something about the national security issue, Sanders shot down the speculation.

O'Malley's creative Trump insult: O'Malley earned a round of applause when he made a not-so-subtle jab at business tycoon and top-polling GOP candidate Donald Trump.

"The fact of the matter is, and let's say it in our debate, because you'll never hear this from that immigrant-bashing carnival barker Donald Trump," O'Malley said. "The truth of the matter is net immigration from Mexico from last year was zero."