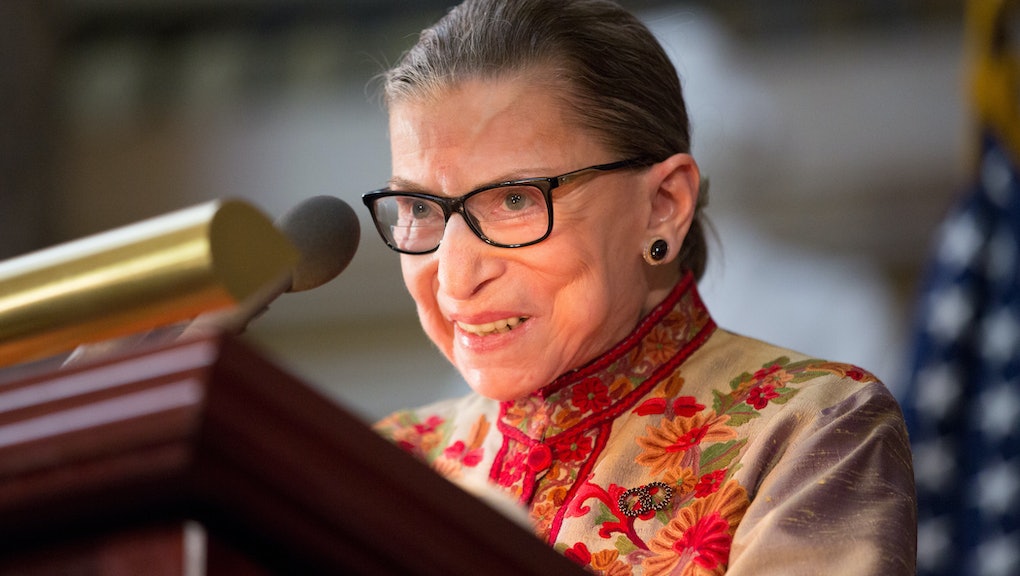 On Saturday — presumably in honor of the recent publication of books written by or about them — the two allowed the New York Times to facilitate the most recent in likely a long legacy of insightful conversations.

Here are just five pieces of wisdom these legendary women bestowed upon the world in a mere 90 minutes of conversation.

Both women came up in an era in which women's dependence on and subordination to men was thoroughly normalized. For example, as the New York Times noted, women couldn't rent apartments or get credit cards (not to mention countless other basic things) without men during the 1960s. Though vocal advocates for women's rights today, it took time for both women to recognize what feminist author Betty Friedan dubbed "the problem that has no name."

Yet both women experienced blatant sexism. When the dean of Harvard Law School asked Ginsburg and the eight other female students in her class of 500 how they justified "taking a spot from a qualified man," for example, Ginsburg "gave him the answer he expected," she told the New York Times.

"My husband is a second-year law student, and it's important for a woman to understand her husband's work," she responded — although, she, "of course," did not truly believe that, she told the New York Times.

When author Gay Talese told Steinem that she was just "pretty girl" who was "pretend[ing] to be a writer," she didn't protest, largely because sexist cultural norms prevented her from seeing herself as a "real" writer.

"For me, writing was a way of staying invisible because I felt invisible, only a little seen through words," Steinem told the New York Times. "I didn't yet have the courage to speak up."

Yet both women have undoubtedly accomplished incredible things since, proving that even the most legendary feminists sometimes fail to universally crusade against sexism.

Women in the United States still face plenty of professional barriers: 1 in 3 has been sexually harassed at work, according to one 2015 survey. Women still make 79 cents for every man's dollar, according to the American Association of University Women. But RBG and Steinem's experiences demonstrate that persistent obstacles don't have to stunt a women's professional dreams.

"I had three strikes against me," Ginsburg recalled to the New York Times of looking for work after graduating from law school. "First, I was Jewish, and the Wall Street firms were just beginning to accept Jews. Then I was a woman. But the killer was my daughter, Jane, who was 4 by then."

Steinem didn't fare much better in the world of journalism. When she tried to get hired by Time magazine, "they made it very clear that women researched, and men wrote," Steinem told the New York Times.

Their experiences were hardly anomalies at the time. Until the Pregnancy Discrimination Act of 1978 was passed, women could be fired from their job for being pregnant — let alone already having a child. Sex-based discrimination in the workplace on the whole wasn't comprehensively addressed until the Equal Employment Opportunity Commission was created in the 1960s.

3. Western feminists can learn a lot from others.

Although mainstream feminist conversations are often criticized for privileging a United States-centric or generally Western perspective, both feminist leaders noted that they were introduced to feminist concepts due to movements and policies evident abroad. When Steinem moved to India after college, she became exposed to "the Gandhian movement and the role of women in it," she told the New York Times. Ginsburg was also inspired by a source beyond United States: Sweden.

"Between 20 and 25% of the law students in Sweden were women," Ginsberg told the New York Times she learned while researching civil procedure in the country in 1962. "And there were women on the bench. I went to one proceeding in Stockholm where the presiding judge was eight months pregnant. There was also a journalist who wrote a column in the Swedish daily paper: 'Why should women have two jobs and men only one?'"

In fact, the United States could still do well to learn from other countries' gender-based policies. Starting in 2016, Swedish fathers will be able to take a third month of paid paternal leave and parents will be able to divide an additional 10 months of paid leave between them, the Guardian reported in May. Iceland has previously been consistently ranked first in the World Economic Forum's Global Gender Gap Report, which measures gender parity in more than 130 countries. And the United States lags egregiously behind plenty of other countries in terms of a variety of measures of equality.

4. Feminism was not invented by, nor should it be centered on, white women.

The feminist movement has long been criticized for prioritizing the voices and concerns of white women. This focus not only marginalizes women of color but further erases their pioneering contributions to the movement's very existence.

"It's important to say that the women's movement was disproportionately pioneered by black women," Steinem told the New York Times. "These are not two different movements; they are profoundly connected. If you are going to continue racism, you have to control reproduction. And that means controlling women."

Ginsburg has also valued and acknowledged diversity. She acknowledged the feminist movement derived "tremendous inspiration from the civil rights movement," and she personally was inspired by "the way Thurgood Marshall led that campaign," she told the New York Times. Ginsberg has also attempted to incorporate these beliefs into her work for decades: One of her most notable dissents, and the one that inspired the viral Notorious RBG Tumblr, was her pointed dissent in the case challenging the Voting Rights Act, which disproportionately impacted voters of color.

If anybody knows about having it all, it's Ruth Bader Ginsburg: As the recently published book Notorious RBG: The Life and Times of Ruth Bader Ginsburg revealed, the justice's almost 60-year marriage was a uniquely nontraditional model of equity. As the book's authors recently told Mic, Ginsburg valued work-life balance beyond her own relationship: She allowed one of her male clerks, a father, to work flexible hours to better care for his child, for example.

Yet even RBG thinks it's impossible to have it all. After reading Anne-Marie Slaughter's book, Unfinished Business, which argues that "we don't have it all," the justice found she agreed. "Who does?" she said to the New York Times. "I've had it all in the course of my life, but at different times."

Steinem added, "The implication for women having it all is doing it all. But you can't."

But what women can do and must continue to do, according to Steinem, is be the change we want to see.

"What we want in the future will only happen if we do it every day," Steinem told the New York Times. "So, kindness matters enormously. And empathy. Finding some point of connection."