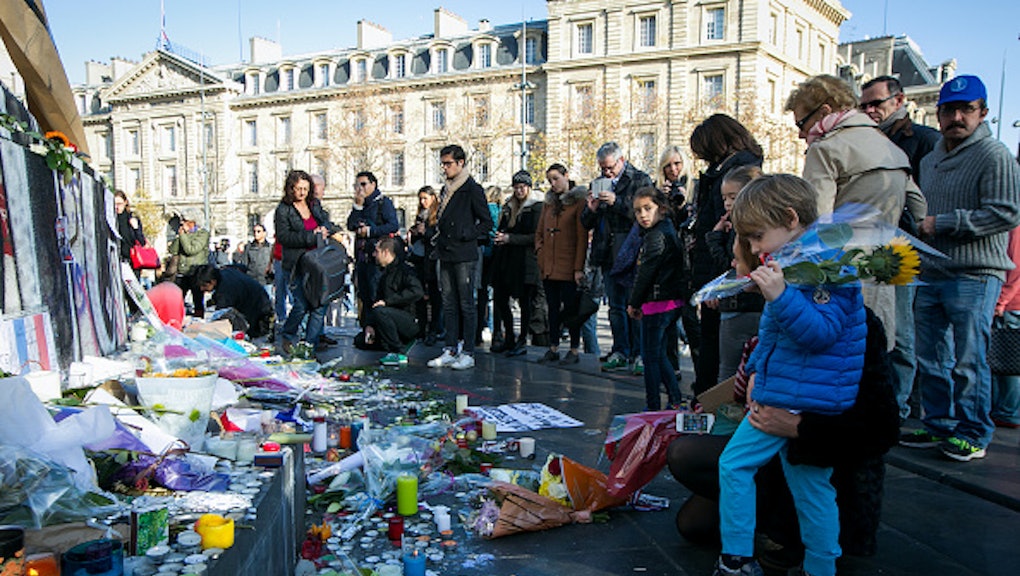 PARIS — Nov. 15, 2015. A modest crowd gathered around the central statute in Place de la République, one of Paris' central squares, bathed in the afternoon sun.

In a small and quiet act of defiance, mourners lit candles and posted notes at the impromptu memorial. The artwork — which went viral on social media — commemorating those who died in the six coordinated attacks on Friday night adorned the statue's base. People who stopped to pay their respects included everyone from passersby to those visibly diminished and exhausted by grief.

Heavily armed military personnel weaved through the gathering as France's state of emergency, the first enacted since 1944, does not allow for large crowds.

Mic asked some of those present in the square to write one word on a piece of paper that described how they felt in the moment.

"Love," wrote one. "Sadness," wrote another.

Within two hours the crowd had swelled to six times the size, bringing with it hundreds more candles and bouquets. The smell of melting wax clung to the air, accompanied by a military that ironically appeared more relaxed than before.

Scores of people stood in a wide circle with five Parisians in the middle holding signs that translated in English as "I love you," "free hugs" and "love is running in the streets." One by one, strangers entered into the circle to embrace one another, many of them reduced to tears once in each other's arms.

During an attempt to change locations for our shoot, we ran into a road blocked by barricades, unknowingly having stumbled on the street where the concert hall Bataclan — the bloodiest site of Friday's attacks — is located.

We asked the police how we could get around and he directed us to a perpendicular boulevard. Uncertain as to whether that would connect with the street we needed, we asked if he was sure.

"Having been on the spot for the second time this year for an intervention, I am certain that the boulevard gets to your street," he said in French, referencing the Charlie Hebdo attacks that unfolded a little over 500 yards from where we stood.

The uncharacteristic ease with which the general public and security forces interacted revealed an atmosphere of camaraderie rather than fear.

"This is terrible," a cab driver also shared in French. "Many of my taxi driver friends saved lives by opening their doors and letting people in as they ran onto the street. I am also a Muslim and these people [attackers] are the biggest jerks on earth. They're not Muslims."