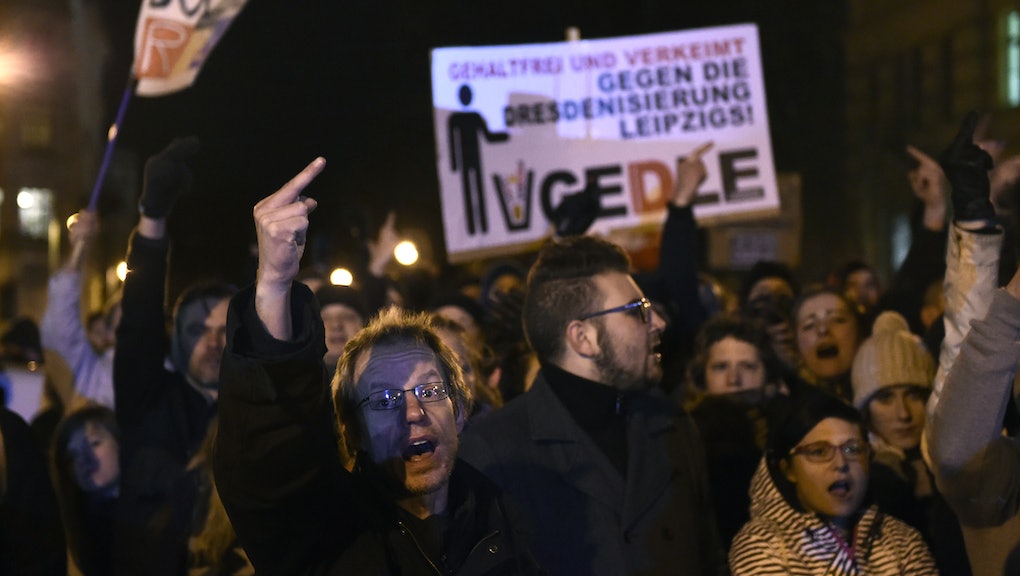 The Western world's Muslim population is bracing itself for a wave of Islamophobia that seems likely to follow the Nov. 13 terrorist attacks in Paris. ISIS claimed responsibility for the shootings and explosions that killed at least 129 people and wounded over 350 others.

After the Sept. 11, 2001, terrorist attacks that killed nearly 3,000 people, anti-Muslim attacks in the U.S. skyrocketed to five times the rate they had previously occurred. Unfortunately, that pattern is already re-emerging in Europe, where the power of right-wing parties has been growing, thanks in part to reactionary fears about Muslim immigration.

Here's how unfair it would be if that shoe was on the other foot. Holding Muslims collectively responsible for the actions of a comparatively few extremists is just as easy as cherry picking the worst moments from Christian history to reach simplistic conclusions about its adherents.

Counterpoint: If religions can be judged on the basis of selectively chosen atrocities, then Christianity could easily be considered the world's worst religion.

Christians launched the Crusades and were deeply involved in the Confederacy and the Ku Klux Klan. Protestant and Catholic missionaries often served as the religious arm of European colonialism, justifying the subjugation of millions of people. Conservative Christian and colonial influence is also at least partially responsible for widespread homophobia in many African countries.

Radicalized Christians were some of the Nazi Party's most fervent new recruits, helped trigger massive witch hunts during the Thirty Years' War and carried out the Spanish Inquisition, among other crimes.

Yet somehow Islam is the most backwards religion in the world, right?

Out of the 1.6 billion Muslims in the world today, virtually all "have not committed an act of terror, nor have they directly facilitated any terrorist act," The Week's Marc Ambinder writes. "So it's absolutely true to say that (in the context of terrorism) not only are most Muslims peaceful, but almost every Muslim alive bears no direct culpability for terrorist acts."

On the Nov. 15 edition of Fox & Friends, host Kimberly Guilfoyle warned that resettling hundreds of thousands of refugees fleeing violence in Iraq, Syria, Afghanistan and other countries is "forced infiltration" of terrorists.

So too did South Carolina Rep. Jeff Duncan (R):

Counterpoint: If Muslim refugees fleeing ISIS are unworthy of compassion, then we shouldn't be concerned about the fate of Christians fleeing them, either.

The U.S. airstrikes against Islamic State that started in September 2014 were originally pitched as part of an operation to save besieged Yazidi Christians, who fled to Mount Sinjar from ISIS militants who considered them heretics and wanted to kill or enslave them.

Many American politicians have enthusiastically backed the idea of helping beleaguered Christians throughout the region who find themselves at the mercy of ISIS or the Syrian government, like Sen. Ted Cruz (R-Texas), who recently said Western countries should to be a "safe haven" for Christian refugees, not "refugees that may have been infiltrated by ISIS." Fellow candidate Jeb Bush suggested relief efforts should be focused on Christians.

Reactionary parties throughout Europe have similarly reacted with disdain to the idea of admitting Muslim refugees, with Slovakia going so far as to only admit Christian ones.

This tweet perfectly nailed the hypocrisy of heartlessness towards the predominantly Muslim refugees fleeing the violence, noting the refugees are trying to escape the same people who attacked Paris.

Argument: It's the responsibility of Western Muslims to condemn terrorism.

Apparently, Muslims who did not commit acts of terrorism bear the same guilt as those who did.

Counterpoint: Following this logic, Christians should still be apologizing for the act of terrorism committed by Dylann Storm Roof, the white supremacist who posed with the Confederate battle flag in his manifesto prior to killing nine African-American congregants at Emanuel AME Church in Charleston, South Carolina.

Think it's a stretch? The Confederate battled flag has a storied history as the symbol for those called on the Bible to support their right to uphold slavery. During the Civil War, the Confederacy called itself a "uniquely Christian nation," with its Constitution expressly stating that the Confederacy was "invoking the favor and guidance of Almighty God." Slave owners quoted the Bible to claim righteousness; the New York Times' Thom Basset writes, they "never tired of pointing out to their abolitionist foes, the Gospels fail to record any condemnation of the practice by Jesus Christ."

People of faith did condemn both attacks, but somehow, it's usually Muslims who are presumed guilty until proven innocent.

Argument: Islam and terrorism are one and the same.

Counterpoint: This is like saying that Christianity and that guy everyone was looking for in 2012 are one and the same.

Joseph Kony, head of the Lord's Resistance Army, is responsible for a campaign of mayhem and terror in the Democratic Republic of Congo, South Sudan and the Central African Republic involving child soldiers, sex slavery, thousands of deaths and maimings. He also claims to be a spirit medium and biblical Christian fighting to install a theocratic government in Uganda (a fact not lost on conservative radio host Rush Limbaugh, who briefly and bizarrely defended the group in 2011).

Radical, violent and armed Christians are not an isolated phenomenon. In the U.S., since 9/11, progressive think tank the New America Foundation reports right-wing groups motivated by religious or anti-government extremism have killed 48 people, while Muslim extremists killed just 26.

The idea that Islam is synonymous with terrorism makes us all less safe. When the Department of Homeland Security warned of the threat of right-wing terrorism in 2009, it was attacked by Republicans who were furious the agency was looking into conservatives — in the years since, right-wing terrorism has grown as a security threat.

Argument: We are at war with Islam.

Geller wrote, "The Muslim migrant stream into Europe is a Muslim invasion. Back in February, the Islamic State warned that they would send millions of Muslim fighters into Europe. They have made good on their every pledge. And now the attacks in Paris demonstrate that Europe is at war."

Agreeing with her was Palestinian-American pundit Walid Shoebat, a Muslim-Christian convert:

Conservative pundit Stephen Hayes took the opportunity to call the attacks "another battle in The Long War against radical Islam":

Counterpoint: By this standard, then Christians are also at war with Europe and everyone else, ever since right-wing nationalist Anders Behring Breivik slaughtered 77 innocent people in a bombing and subsequent mass shooting in Norway in 2011. Most of the victims were progressive youths gathered for a Workers' Youth League meeting at the island of Utøya.

Though it's unclear how religious Breivik was personally, he nonetheless explicitly claimed a Christian motive for the attacks. He saw himself as a "Christian warrior in the midst of what he called an 'existential conflict' with Islam – a modern knight confronting foreign hordes at the gates of the West," writes the Southern Poverty Law Center's Ryan Lenz.

In his manifesto, Breivik described himself as motivated by a "conservative cultural Christian" outlook and described Christianity as providing the "cultural, social, identity and moral platform" of modern Europe.

Yet somehow the Christians of Europe made it through the Norway attacks without suspicion they were the third column of an enemy religion, just waiting for the right time to do harm.

Argument: There's no such thing as a "moderate" Muslim.

"As usual, there has been near-total silence from those Islamic mullahs who, we are told, are 'moderates,'" writes World Net Daily columnist Lord Monckton. "It is their silence that is leading me, among others, to wonder whether we should any longer regard Islam as a religion at all ... Today, except perhaps in the Ahmadiyya sect, there is no such thing as moderate Islam."

Cartoonist Bosch Fawstin echoed his point, as did many others:

Counterpoint: Anyone who lived during the 200-year period of the Crusades (1095 to 1291), during which the papacy and various rulers urged Christian soldiers invade large stretches of the Holy Land, might tell you the 1.7 million deaths that resulted prove all Christians are fanatics or complicit in extremism.

Just because some people commit terrible acts in the name of a religion does not make the rest of its followers fanatics.

It's true that most terrorism deaths currently going on the world today are linked to a handful of Islamic terrorist groups. But the vast majority of Muslims do not agree with extreme violence in the name of religion; one 2013 poll showed that support for such attacks by Muslims is on the decline. After news hit of the massacres, thousands of Muslims around the world denounced the attacks.

Perhaps that is because the violence in the Islamic world predominantly affects other Muslims; CNN's Peter Neumann reviewed 58 ISIS defectors and found their number one complaint was the group's obsession with fighting other Sunni Muslims and punishing perceived traitors. As President Barack Obama recently pointed out, the vast majority of ISIS' victims are other Muslims.