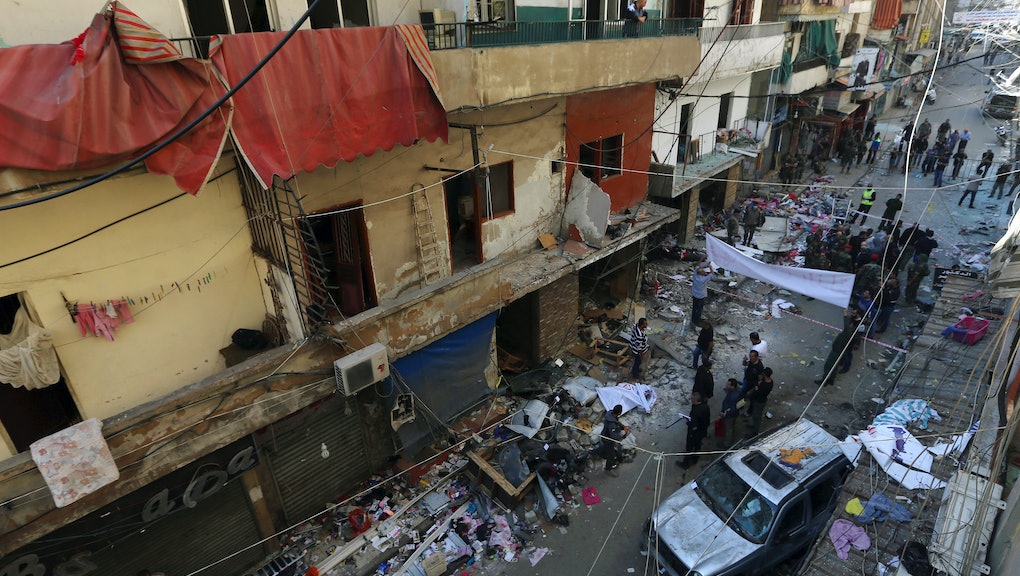 The world descended into chaos this past weekend. Terrorists attacked Paris, a suicide bomber blew up a funeral at a Baghdad mosque, an earthquake shook Mexico and bombs struck Beirut. Deaths may be said to come in threes, but tragedies follow no such cosmic order. They just happen, in succession, until we can barely count the seconds between one and the next.

The overlapping tragedies — and the relative silence on some of them — became more pronounced as Facebook allowed users to superimpose a French flag filter over their profile pictures and many media outlets covered the Paris attacks at a level far outstripping other worldwide tragedies.

A New York Times article Sunday declared Beirut "feels forgotten." The New York Times covered the deadly blast, with an original video, two days earlier. Like the case of a missing white girl or the mourning of Cecil the Lion, people began to speak out about the perceived unequal coverage between differing sets of international crises.

On Instagram, a poem about the difference in coverage between the Paris attacks and the devastation in Beirut and Baghdad garnered over 41,000 likes. People updated their statuses and tweeted their thoughts. Jill Filipovic, a former political writer for Cosmopolitan, felt compelled to enter the conversation.

Filipovic said she wrote the post to complicate the conversation around the coverage of these attacks. "The post came from a place of frustration that the media is not this overlording entity that exists without an audience or a commercial model that drives it," she told Mic.

She said the narrative has many complicated factors, two of them being racism and ethnocentrism. However, the nature of media, and what media believes its consumers want to see, is often just as important.

Filipovic said that, as media consumers, we must demonstrate we care about a variety of places and issues in an ongoing way, not just during times of crisis.

"If every killing is not covered around the world with a front-page, six-cover spread, are those lives not as important?" Filipovic said. "To say this is only racism, or a Western-centric mentality is to really really oversimplify a complicated problem."

As the day progressed, more and more Facebook users looked for ways to complicate that narrative. People began to create their own filters — the Lebanese flag, or amalgams of many flags.

Instagram and Facebook posts asking readers to "Pray for the World" began to pop up on people's feeds.

The compassion was there. It had begun to show. But, why then, did compassion for Paris still dominate the narrative? In order to learn more about the true nature of compassion, Mic spoke to the person who wrote the book on compassion. No, really.

Maureen O'Connell, chair of the department of religion at La Salle University and author of Compassion: Loving Our Neighbor in the Age of Civilization, told Mic that showing compassion to those who don't share our values — Western values, liberal values, American values, Christian values or any values — is difficult because compassion requires imagination.

"It's about figuring out how to not be limited by the identities that get constructed for us," O'Connell said. "Compassion is basically that idea of being able to suffer with another person."

O'Connell said philosopher Martha Nussbaum said compassion is the basic social emotion and often requires that a central tenet of compassion is imagination. To feel compassion, we must be able to see ourselves in the situation of those who are suffering.

Our imagination cannot always handle too vast a chasm — it has its limits. Our compassion, said O'Connell, might be more easily placed with those in Paris, through no fault of our own, simply because of our shared Western values. But, we can change, alter or stretch those limits by wrestling with the suffering of others emotionally, rather than logically.

American emphasis on individualism, invulnerability and autonomy often get in the way of compassion, O'Connell said. "I think they get in the way because in some ways they make us suspicion of any kind of emotion and compassion is a very raw emotion," she said.

That lack of emotion often stunts Americans from seeing our connections with others in our global community. "We have trouble seeing that our well-being and the well-being of our neighbor are interconnected," she said.

To connect those dots, O'Connell said, would require a lot of collective soul searching, something America is not usually good at doing. "We're really good at changing our Facebook pages to represent who we are, but we're not good as a collective at publicly weeping, publicly mourning, publicly lamenting that there are things that are fundamentally wrong right now," she said.

"We're trained with a kind of logic, a pragmatism, to say, 'Here is a problem, let's pull together the tools and the resources and the logic to save it,' which is different than, 'Here's a problem, let's wade into the really deep emotional waters of this problem.' It's only when we wade into those waters that we see the web at the root of those differences and only then we can we see those invisible threads that connect them."

To wade through those emotions brings incredible risk, according to O'Connell. "We've got to risk feeling pain, we've got to risk not fixing everything right away," she said.

As the conversation came to a close, O'Connell discussed the famous Audre Lorde quote: "There is no such thing as a single-issue struggle because we do not live single-issue lives."

"There are connections among those things. If we're willing to connect the dots among these different instances of suffering in our culture, in our world right now, then maybe we can start to look at this suffering differently and look at responses differently and perhaps interrupt the cycle of violence."