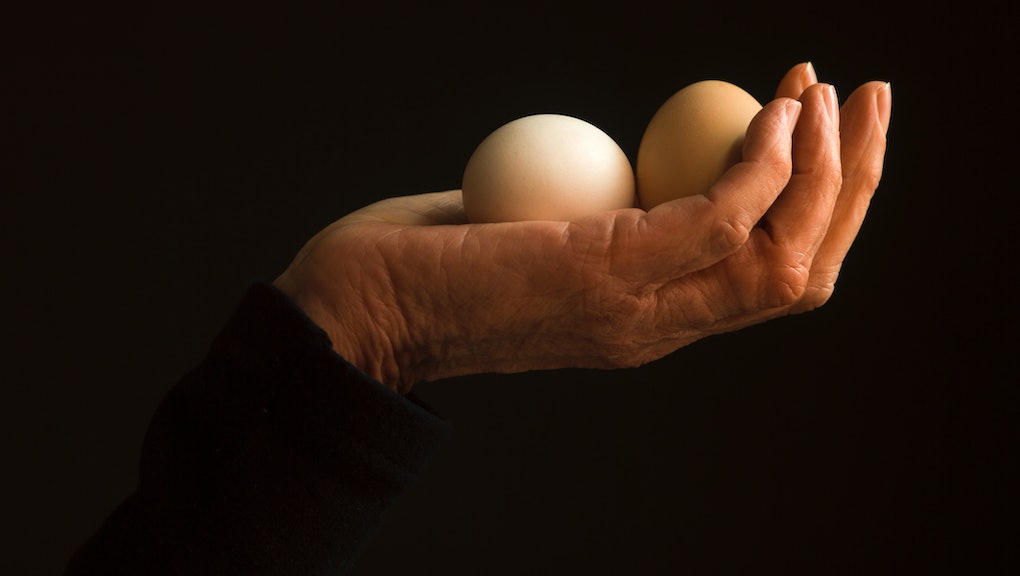 Here's one way to prove your ballsiness.

Today marks the launch of the Scrotum Beauty Pageant, an online competition devoted to the scrotum, the sac that holds the testes, that's being marketed as "the world's first balls beauty contest." The scrotum-fest will solicit submissions from contestants around the globe, and the men will have until Christmas to upload photos of their junk to a special website. Visitors will vote for their favorite gonads and ultimately select the winner.

"Even the contest's losers will be winners," the contest's creator, sex toy entrepreneur Brian Sloan, told Mic in an email. "They will have all proudly showed their balls to the world and promoted appreciation for the diverse range of scrotal styles." (If you're curious as to what the entries look like so far, you can check it out on the contest's [obviously NSFW] website.)

Shockingly, this is not without precedent. At first blush, the Scrotum Beauty Pageant seems like the male counterpart to this summer's Vagina Beauty Pageant, which Sloan referred to as the world's first crowdsourced competition for the world's most beautiful vagina.

At the time, Sloan claimed the results of that contest would be used as a statistical resource to study vulval variety. (It was also, undoubtedly, a shrewd PR strategy for Sloan's sex toy business, as the winners' ladybits were ultimately replicated for use in a sex toy.) Yet when the Vagina Beauty Pageant went viral, it was branded as yet another sexist and skeevy way to objectify women's bodies.

But while Sloan told Mic that the aim of both competitions was "to provide insight on genital beauty standards," the parameters are slightly different this time around. Instead of 3D-printing the prettiest scrotum to serve as a model for a sex toy, as he did with the Vagina Beauty Pageant winners, Sloan told Mic he plans to "make decorative items out of the winners' balls." He envisions using the winning scrotum as a model for paperweights, doorstops and bookends, among other things.

"I'm a relatively creative person and I cannot think of a sex toy to make from a man's scrotum," he explained. He brainstormed a few options with Mic — enlarging it and adding a hole, for example, or converting it into a wearable device "so that [men] and their partners can experience the auditory and physical stimulus of scrotum slapping during sex" — but ultimately decided those options wouldn't sell very well.

Scrotums are second-class citizens. The launch of the Scrotum Beauty Pageant prompts an obvious question: Given that scrotums aren't exactly considered a desirable part of the male anatomy, why wouldn't Sloan just launch a Penis Beauty Pageant instead? His answer is simple: it would be too "predictable." "I fear nothing would be learned from it," he told Mic.

According to Sloan, the scrotum isn't often considered something worthy of appreciation, despite its crucial function as the external sac that protects the testes. "The scrotum is like the penis's disliked step-cousin," he said.

While scrotums have had a resurgence in the public consciousness lately — thanks in large part to the popularity of the Scrotum Backpack and the now-defunct Nutscapes Instagram, which juxtaposes men's hairy testicles with picturesque landscapes — Sloan is correct that scrotums are, all things considered, an under-appreciated part of the male anatomy.

A quick glance at Yahoo! Answers threads indicates that there's a great deal of mystery surrounding the scrotum, with posters frequently using words like "weird" to describe the appendage. Moreover, it can be difficult for those who have sex with men to know what to do with testicles during sex, a conundrum made even trickier by the fact that men tend to have varying levels of sexual sensitivity down there.

For Sloan, putting scrotums on a pedestal has a high-minded purpose: he wants to give men the chance to proudly display a less-appreciated part of their junk.

"I am very happy with mine and I would like for this contest to be a way for men to gain confidence in their scrotums," he said.

"The scrotum is like the penis' s disliked step-cousin."

Play ball: One of the most prominent criticisms of the Vagina Beauty Pageant was that it held women to yet another set of ridiculous beauty standards. Sloan, however, takes the opposite view. In his opinion, the new contest will serve to introduce scrotal diversity to a larger audience.

"I'd like for this contest to help spread the word that all genitals are beautiful to someone," Sloan said. He said that many men are undergoing scrotal lifts and reductions because they believe their family jewels aren't up to snuff, and that his contest is meant to encourage men to be happy with what they were born with. (While it's tough to find any hard-and-fast numbers on scrotal surgeries, "ball ironing," a cosmetic procedure that supposedly got rid of wrinkles, became something of a meme back in 2013.)

While asking men to submit to judgement about their genitals from faceless Internet strangers might not be perfectly aligned with that message of self-empowerment, Sloan told Mic he was curious to see whether the male version would be subject to the same critiques as the Vagina Beauty Pageant was. "I'm not sure what the differences will be, but it will be interesting to see how it plays out," he added.

"This is not a response to the Vagina Contest in as much as it's a continuation of exploration of genital beauty standards on a global scale."

At the end of the day, however, he's adamant that both pageants weren't so much self-marketing gimmicks as they were an opportunity for data aggregation. "[The Scrotum Beauty Pageant] is not a response to the Vagina Contest in as much as it's a continuation of exploration of genital beauty standards on a global scale," he said.

Indeed, the same anonymous data scientist who authored The Vulva Paper — a statistical analysis of the results of the Vagina Beauty Pageant — will set his sights on the Scrotum Beauty Pageant.

"As he is actually an oceanographer, he will classify the scrotums using features to differentiate them, as if he were discovering and classifying a never-before-seen species of fish," Sloan said.

When it comes to selecting the winner, Sloan has no idea what to expect from the results, though he has some theories as to what the "ideal" set of testes might look like. "I'm guessing that bigger ones will rate more highly than smaller ones, but I'm not sure how dangling versus non-dangling will affect ranks," he said. "There are other factors that will come into play such as symmetry, hairiness, color, perhaps even ethnicity."

Until Christmas, however, the best-in-show scrotums — Will they be wrinkly? Large? Small? Dangly, or not dangly? Hairy or hairless? — will remain a mystery.

"I think that just the act of men showing their scrotums to the world will help people to see that every scrotum is beautiful in its own way," Sloan said. "Well, most."