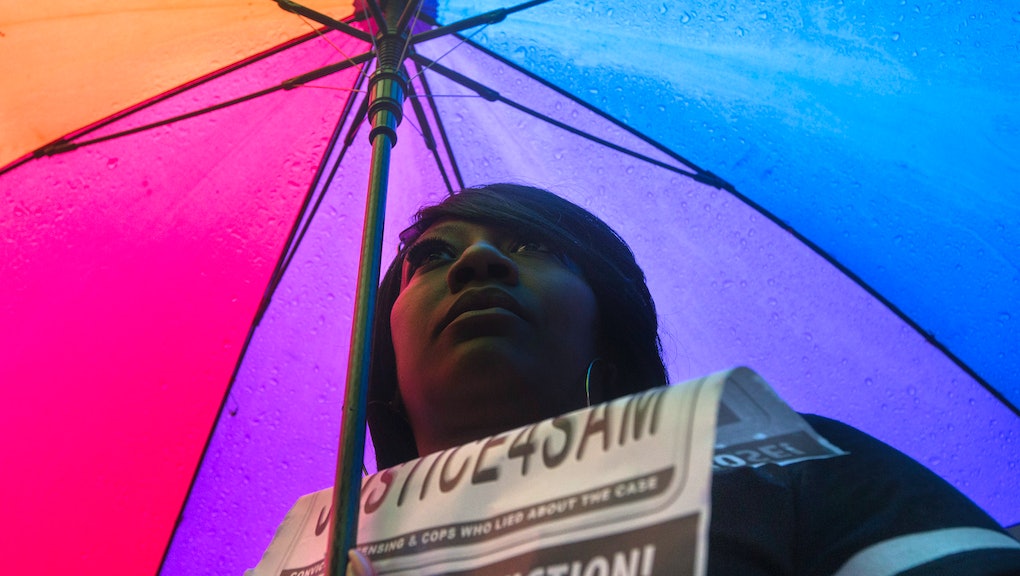 The contents were revealing. The 10-point, 21-page document gave a comprehensive look at how to make Cincinnati safer and more welcoming for black students — including more black faculty, a racial awareness curriculum and funding for initiatives that recruited black students.

But the top item on the list may also be the most pressing: the immediate duty restriction of Phillip Kidd and David Lindenschmidt, the two University of Cincinnati police officers who backed up Tensing's fake story about killing Dubose.

"We demand that the University of Cincinnati immediately restrict [Kidd] and [Lindenschmidt] from patrolling on or off of campus," the group wrote, citing what many saw as a deliberate attempt to cover up for Tensing.

Mic has since confirmed that both officers are still on active duty at the university — even as their former colleague Tensing has been indicted for murder and is out on bond awaiting trial.

Kidd and Lindenschmidt made headlines last summer when they corroborated Tensing's version of Dubose's killing. According to their account, Tensing shot Dubose in the head because he was being dragged by the motorist's car and acted out of fear for his life.

This story has since been refuted. Tensing's body camera recorded the incident, and shows Dubose trying to drive away as Tensing — who is falling backwards at the time — fires at him while he flees.

Tensing was indicted shortly after, and Kidd and Lindenschmidt were placed on paid administrative leave pending an investigation. Yet neither officer was indicted for their connection to the shooting. Both Hamilton County prosecutor Joe Deters and an independent investigative firm, Kroll, Inc., declared the officers innocent of wrongdoing, despite their initial statements turning out to be untrue.

"UCPD officers are no longer making active traffic stops on or off campus, a policy that started after Dubose's death."

Kidd and Lindenschmidt were also involved in the 2010 tasing death of an unarmed black man named Kelly Brinson at Cincy's hospital, who was suffering from a psychotic episode at the time. A University of Cincinnati Police Department spokesperson told Mic Monday that UCPD officers are no longer making active traffic stops on or off campus, a policy that started after Dubose's death. The department is currently re-evaluating how its duties fit with policing in Cincinnati more broadly.

But activists at the university haven't forgotten either event. The Irate Eight — named, aspirationally, for the percentage of black students the activists hope will soon make up Cincy's main Uptown Campus (currently 5% black) — formed shortly after Dubose's death, and have made Kidd and Lindenschmidt a centerpiece of their movement.

According to Brittany Bibb, a 22-year-old student organizer with the group, the Irate Eight's activities are organized largely via the messaging app GroupMe. "We only just started meeting in person last month," Bibb told Mic. "The first time, we met at [a friend's] house and came up with a list of things we wanted to see from the university [after the shooting]."

There are two Irate Eight GroupMe threads consisting of approximately 60 members each, Bibb said. Most of Cincy's black student organizations and their members are considered de facto members, though the Irate Eight has no concrete leadership structure and decisions are made by consensus.

The group has been prolific in its activism so far. In October alone, its initiatives included a cookout fundraiser, multiple racial equity teach-ins in partnership with some of the school's faculty and the aforementioned list of demands, which have since led to meetings with various Cincy administrators, according to a timeline provided on the Irate Eight website. In August, the group hijacked the hashtag #HottestCollegeInAmerica — which was originally created to drum up excitement around the university's recruiting — to draw attention to their cause. In September, the Irate Eight helped host a "Sam Dubose Week" of educational events and demonstrations.

All have their roots in the events of last summer. On Jul. 19, when Tensing killed Dubose, Bibb and many of her fellow University of Cincinnati students were still on summer break. The school was placed on lockdown in the tense hours before prosecutor Joe Deters announced he would indict Tensing for murder the following week, Bibb added, and police cars swarmed the area, anticipating the type of unrest seen in Ferguson, Missouri, and Baltimore, Maryland.

"It was insulting to the black community." — Brittany Bibb, the Irate Eight

"Even the liquor stores near campus were boarded up," Bibb told Mic. Cincinnati is 44.8% black, according to 2010 Census data. "They knew [Deters] was going to indict [Tensing], but the way they acted insinuated black people were going to riot. It was insulting to the black community." Black Cincy students and alumni discussed the reaction on-and-off for the rest of the summer, and shared ideas about how to respond once school reconvened.

As they started filing back into classes in the fall, one problem become apparent. Students realized the officers who had corroborated Tensing's story still worked for Cincy's police department, and were still being sent on patrols around campus.

Considering the officers' fraught history with black men — a history echoed by Tensing himself, who was caught on video in a tense interaction with a black student and his cousin earlier in the year — Kidd and Lindenschmidt's presence made some students feel unsafe. "It's kind of scary," Bibb said, "because if something happens to you and they were involved, it seems like they're just going to get let off the hook again ... Regardless of what the [Kroll] report says, we know what happened."

Aside from this, the Irate Eight's efforts have seen encouraging results. Both President Ono and student government representatives have sent letters of support in response to the group's demands, all of which are available to read online at the Irate Eight website.

"Given the sensitive nature of these issues, we believe you deserve more than simply an exchange of documents, but a real commitment on the part of the university to work with you and other stakeholders to address the important concerns you have raised," President Ono and Chief Diversity Officer Bleuzette Marshall wrote.

Still, activists feel an exchange of documents is all that's actually being done. "We aren't happy with response," Bibb said. "We wanted a concrete timeline, not just, 'We received your demands and we're looking at it.'"

In another statement Oct. 29, the Irate Eight criticized the Ono administration's lack of a timetable and its perceived failure to respond publicly to the specificity of each demand.

Bibb said the meetings they've had with administrators in private have been more encouraging, however. Discussions with the Provost's Office, the Admissions Office and the Department of Public Safety seem to be progressing favorably, with platitudes made to even place Irate Eight representatives on search committees to recruit black faculty and students.

It's a start. Yet as with any systemic change, the process is painfully slow for some. "It's kind of like now or never," Bibb said. "When we graduate, it's up to the younger generation to make sure stuff is still happening. We want to lay a framework down so it's already being done."

Nevertheless, the Irate Eight continues to hope that public pressure — fueled by the specter of two police officers who allegedly tried to help a killer lie about his crime still patrolling their campus — will speed up the process.

President Santa J. Ono was unavailable for comment before publication.