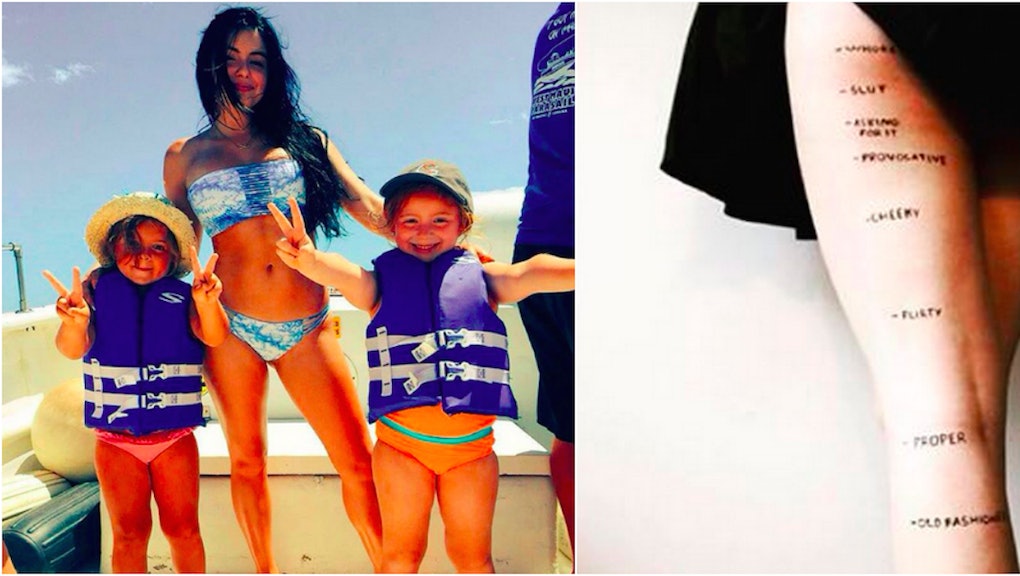 Instagram is full of photos of women in bikinis sunbathing on the beach. So when Ariel Winter of Modern Family posted a photo of herself wearing a bikini while on a boating trip with her nieces, she was doing what pretty much everyone else does: 'gramming a memorable moment.

Nothing here except a few good smiles and some adorable peace signs from her nieces.

What followed was a dose of unexpected backlash from trolls who said Winter looked as if she was "asking for it."

Yep. By wearing a two-piece swimsuit, apparently, Winter was somehow inviting sexual attention (or worse) from others. It was the kind of nonsense that Winter could have easily shrugged off, but instead she posted a brilliant follow-up to shut up the haters and encourage young girls to wear whatever they please.

The image Winter shared is an image that's previously gone viral, showing different imaginary hemlines drawn on a leg, with each hemline paired with a judgment — from "old-fashioned" and "prudish" to "cheeky" and "slut."

"This is for the girls who are constantly bullied," Winter, 17, wrote in the caption. "You are not asking for anything because of what you are wearing — you are expressing yourself and don't you ever think you deserve the negativity as the consequence to what you are waring [sic]."

Her caption in full reads:

Who knew that an innocent photo with my nieces would turn into this? The height of a girl's skirt or whatever she is wearing for that matter, does not imply what she is asking for. It sickens me to think at 17 years old, a photo of myself with my nieces is suggesting that I'm "asking for it". I typically never give power to the mean things people bravely say behind their computer screens on the Internet, but this is for the girls who are constantly bullied whether it be online or at school.. You are not asking for anything because of what you are wearing- you are expressing yourself and don't you ever think you deserve the negativity as the consequence to what you are wearing- YOU ARE BEAUTIFUL. Celebrate you and don't let anyone's comments allow you to think less of yourself. Us girls have to stick together!!!!!!

The sentiment is one too many girls and women are familiar with: clothing choices being seen as invitations or snubs, every decision a woman making about her outfit or body leaving her open to judgment — and often, sexualization.

Speaking up: It's not the first time that Winter has had to deal with Internet bullies who have plenty to say about her body, good and bad. Earlier this month, pop singer Ariana Grande posted a response to an Internet troll who said he'd prefer Winter's curvier body over Grande's. Winter tweeted her response, "Women should empower one another."

It's a poignant message and one that Winter has repeated many times this year. She publicly underwent a breast reduction surgery this year after years of back pain as well as constant objectification in the press. Her breast size, she told Glamour in an interview, was often what made news.

"That's pretty much all I was known for and that upset me," she told Glamour. "It made me feel really uncomfortable because as women in the industry, we are totally oversexualized and treated like objects. Every article that has to do with me on a red carpet always had to do with 'Ariel Winter's Crazy Cleavage!' Or 'Ariel Winter Shows Huge Boobs At An Event!' That's all people would recognize me by, not, 'Oh, she does great work on Modern Family.'"

That struggle is felt not only by celebrities subjected to headline, but girls nationwide. Just check out the high school debates over dress code, in which girls are protesting clothing rules that inherently objectify them.

Winter sharing her own story led to her being named one of Time's "Most Influential Teens of 2015." It's all a part of reminding girls that they're free to dress and look how they want to.