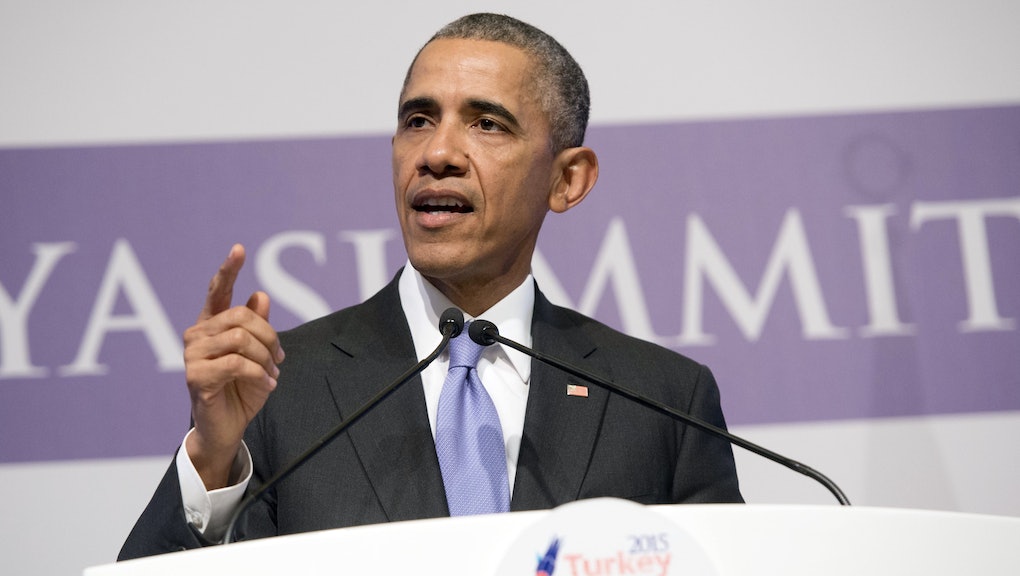 At a press conference Monday from the G20 summit in Antalya, Turkey, President Barack Obama defended his administration's strategy to fight the Islamic State group after it claimed responsibility for Friday's attacks in Paris that left 129 dead and hundreds wounded.

"This is not conventional warfare. We play into the ISIL narrative when we act like they are a state," he said, using another acronym for the group, also known as ISIS. "We use routine military tactics that are designed to fight a state that is attacking another state. That's not what's going on here. These are killers with fantasies of glory."

Obama announced a new intelligence-sharing agreement with France, which on Sunday launched massive airstrikes against the ISIS capital of Raqqa, Syria, in retaliation for the attacks.

Obama faced increasingly skeptical questions from reporters about the administration's strategy, which has come under enormous scrutiny in the aftermath of the Paris attacks in which ISIS demonstrated the ability to extend its reach beyond the territory it controls in Iraq and Syria. "Isn't it time for your strategy to change?" Obama was asked by a reporter from Agence-France Presse.

Obama argued throughout the press conference that the attacks in Paris do not require a change in strategy to fight ISIS, but rather an intensification of the current approach, which includes air strikes, counterterrorism operations and humanitarian assistance for refugees.

Obama dismissed calls for increasing ground operations in Syria and Iraq, stressing that a full-scale ground engagement would be unsustainable in the long run.

"Assume that we were to send 50,000 troops into Syria," he said in response to a question. "What happens when there's a terrorist attack generated from Yemen, or Libya?"

"Folks want to pop off and have opinions on what they think they would do, present a specific plan," Obama said, referring to critics.

"If you have a handful of people who don't mind dying, they can kill a lot of people. That's one of the challenges of terrorism."