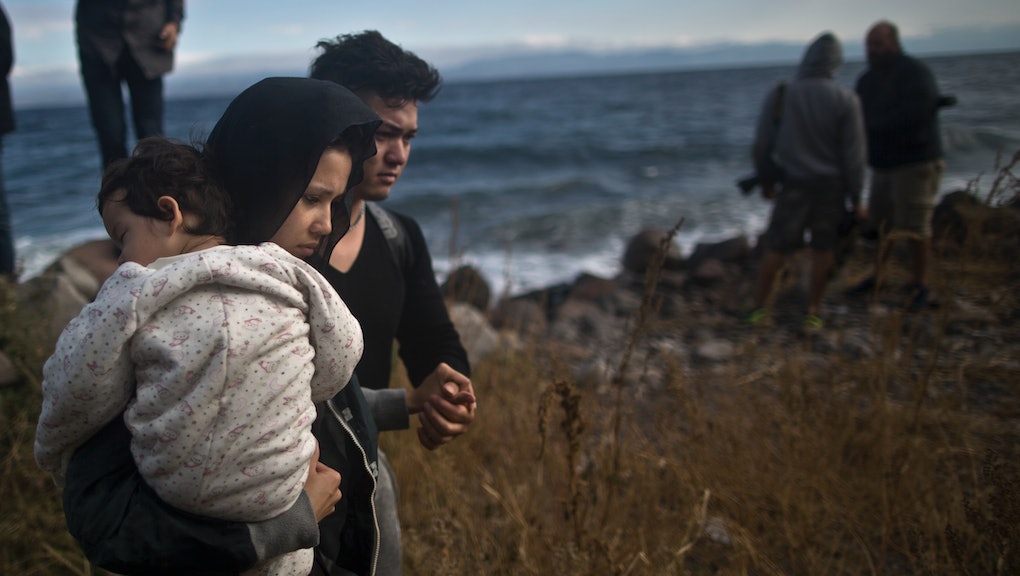 From the playing of "La Marseillaise" in American opera houses to the adornment of monuments and landmarks around the world with the French tricolor, the reaction to the terrorist attacks in Paris that left at least 129 people dead have inspired a global outpouring of sympathy.

But as the world mourns the victims of the siege of Paris, a growing number of politicians in the United States see the attacks as vindication of the belief that permissive immigration policies by Western nations are a tool for terrorism. With the news that at least one of the terrorists who attacked Paris on Friday evening held a (possibly fraudulent) Syrian passport and had claimed refugee status in Greece, U.S. leaders are beginning to protest the planned admission of as many as 100,000 refugees into the United States by the end of 2017. Those spots, they say, should be reserved for Christians.

Speaking to reporters in Antalya, Turkey, on Monday, President Barack Obama called such suggestions "shameful" and a "dark impulse."

"When I hear folks say, 'Well, maybe we should just admit the Christians and not the Muslims,' when I hear political leaders suggesting there should be a religious test for which person who's fleeing from a war torn country — that's shameful," Obama said. "That's not American. That's not who we are. We don't have religious tests to our compassion."

Rising anti-refugee sentiment: Obama was referring to a series of statements, growing in number and intensity, by members of the Republican Party encouraging the federal government to treat all Muslim refugees from Syria as suspected terrorists.

On Sunday, Texas Sen. Ted Cruz called for a blanket ban against Muslim refugees from Syria entering the U.S., arguing that displaced Christians seeking asylum are the only refugees safe enough to enter the country.

"There is no meaningful risk of Christians committing acts of terror," Cruz told reporters in Myrtle Beach, South Carolina. "If there were a group of radical Christians pledging to murder anyone who had a different religious view than they, we would have a different national security situation. But it is precisely the Obama administration's unwillingness to recognize that or ask those questions that makes them so unable to fight this enemy. Because they pretend as if there is no religious aspect to this."

Cruz's opposition to allowing Muslim refugees to enter the United States has been echoed by at least 20 sitting governors, who say they plan to deny Syrian refugees entry into their states. (Whether they possess the legal or constitutional ability to do so is unclear.)

Cruz's fellow candidates have echoed his position on the huddled Syrian masses yearning to breathe free. On Fox News Sunday, leading Republican candidate Dr. Ben Carson told host Chris Wallace that "bringing people into this country from that area of the world, I think, is a huge mistake, because why wouldn't [ISIS] infiltrate [refugees] with people who are ideologically opposed to us? It would be foolish for them not to do that."

"We should use our expertise and resources to help get them resettled — over there — and to support them over there," Carson said. "But to bring them here under these circumstances is a suspension of intellect."

Fellow presidential candidate and former Florida Gov. Jeb Bush made his endorsement of a Christians-only refugee program even more explicit. "There are a lot of Christians in Syria that have no place now," Bush told Jake Tapper on CNN's State of the Union on Sunday. "They will be either executed or imprisoned either by Assad or by ISIS. And I think we should have — we should focus our efforts as it relates to refugees for the Christians that are being slaughtered."

New Jersey Gov. Chris Christie, whose weak national polling numbers recently bumped him down to the bottom tier of Republican presidential hopefuls, told conservative radio host Hugh Hewitt that not even Syria's most vulnerable refugees should be allowed into the United States:

None of the candidates have said how they plan to determine whether refugees are Christian or Muslim.

"Dark impulse": Obama responded to the comments by reminding critics of the United States' long history of religious and racial pluralism.

"When Pope Francis came to visit the United States and gave a speech before Congress, he didn't just speak about Christians who were being persecuted," Obama said. "He didn't call on Catholic churches just to admit those who were of the same religious faith. He said, 'Protect people who are vulnerable.' So I think it is very important for us right now, particularly those who are in leadership, particularly those who have a platform and can be heard, not to fall into that trap, not to feed that dark impulse inside of us."

Obama then spoke approvingly of the actions of another Republican who was faced with the opportunity to pin a terrorist attack on Muslims: President George W. Bush.

"I had a lot of differences with George Bush on policy," Obama said, "but I was very proud after 9/11 when he was adamant and clear about the fact that this is not a war on Islam. The notion that some of those who have taken on leadership in his party would ignore all of that — that's not who we are. On this they should follow his example — it was the right one. It was the right impulse. It's our better one."

"Whether you're European or American, the values that we are defending, the values that we're fighting against ISIL for are precisely that we don't discriminate against people because of their faith," Obama said, using an alternative acronym for ISIS, also known as the Islamic State. "We don't kill people because they're different than us. That's what makes us different from them."

Watch the segment of President Obama's speech below (at the 41:55 mark):