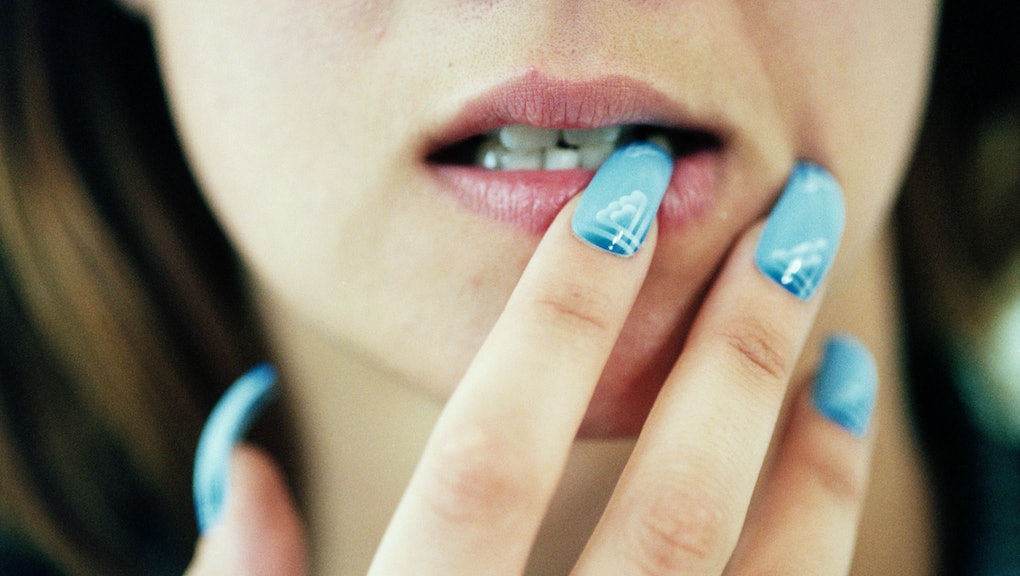 Women Are Stopping an Anxious Skin-Picking Habit With Fake Nails

I've kicked a lot of bad habits, but one that lingers is obsessive, unconscious picking at my face. I've never had perfect skin, but digging into my pores at blackheads with my grubby fingers wasn't helping my cause.

Everyone has popped a pimple, but extreme skin picking is something else. Which is why some, like me, are literally taking matters into our own hands.

When picking is more than just a habit: Not all pore excavating and hangnail peeling is rooted in anxiety, nor is all skin picking a medical concern. But more dermatologists and psychologists are seeing a certain level of picking as "pathological grooming," grooming that goes beyond basic maintenance and is instead motivated by external, unrelated factors, such as anxiety.

According to the International OCD Foundation, "Skin picking is not considered a disorder unless it is often and/or bad enough to cause significant distress or problems in other areas of life." But it can become that; the fifth edition of the Diagnostic and Statistical Manual of Mental Disorders includes skin-picking disorders among "Obsessive-Compulsive and Related Disorders."

Excoriation is one term to define this obsessive skin picking, as used by the DSM, another is dermatillomania.

"I saw a battalion of dermatologists and inquired about a plastic surgeon, but all agreed that my problem was psychosomatic — dermatillomania," wrote Jenna Marotta for Marie Claire of her lifelong battle with skin picking.

Marotta's debilitating picking habits were driven by depression and anxiety, she explained. For those with obsessive skin picking, that anxiety might run deep or just be more of a nervousness or even boredom that grows over time.

"It's usually females [who do this]," adolescent psychologist Barbara Greenberg told Mic. "It often starts after they start developing acne, and they start picking on it. ... It is usually a response to boredom or anxiety to pick, because then they get tension relief from the boredom and anxiety," she explained.

"It's a subconscious habit that I mostly do when I'm bored," said Ivy*, a 24-year-old living in Brooklyn, who lives with anxiety-related skin picking. "It's not just my face that I pick at either. I scratch off any little bump I find on my scalp I can find. Honestly, I have no regrets about it at all."

That's one way skin picking and OCD aren't totally the same, psychiatrist Carol Mathews told NPR. "In OCD, the compulsion is really unwanted," she said. For many pathological skin-pickers, on the other hand, "It's rewarding. It feels good. When you get the right nail, it feels good. It's kind of a funny sense of reward, but it's a reward," Mathews told NPR.

Finding a beautiful solution with nails: But not everyone is at peace with their picking. I was growing increasingly frustrated with myself; with my 28th birthday around the corner, I felt far too old to still be picking at my chin every time I got stressed. So I went searching online for ways to stop and found myself on the aptly named website SkinPick.com.

There, I saw an intriguing question posed: "Anyone begin using acrylic nails to stop picking?"

The short answer is yes. Some people go for traditional acrylic nails, while others opt for hard gel extensions and silk wraps. There's also shape to consider, with some people going with the goth girl favorite, coffin nails, and others trying the ubiquitous stiletto nails. For a cheaper DIY option, others use press-on nails.

Many have arrived at the nail trick after hearing about it through online communities such as Reddit. From SkinPick.com to social media, it's another example how technology can allow those who feel isolated find others suffering from the same problem and find solutions.

"The thing with the pointy witch nails is that I can't get the satisfying scratch I want or get the right spot squeezing leverage," wrote Natalie Meehan on xoJane. "Therefore, I've stopped bothering to touch my face as a recreational activity — and lo and behold, my skin has honestly never looked better."

Ivy tried fake nails for her more acute anxiety, and it worked.

"Part of this was making it physically impossible for me to shear off pimples or dry parts of my skin," she told Mic. "There's something about the plastic that's duller and thicker than an actual fingernail, so you can't really get underneath any bumps... like covering the ends of your nails with soft wax or something."

Plus, she added, "I definitely think fake nails, the one time I actually splurged for silk wraps, made me feel more like a proper lady."

"I would say that they don't allow for a grip on my skin," agreed Carly*, a 27-year-old from the Virgin Islands, who first dealt with acne in high school. "The nails just kind of roll off my skin. And anyone with acne or anything of that sort knows you need a good grip!"

"Generally I pick my face when I had bumps or dried skin," she added, "but nowadays with my nails and a better understanding of my skin, I rarely pick at my face."

Fake nails or gel manicures aren't a quick fix for everyone. Not only do they come with risks —the UV lights used to dry gel nails may be linked to skin cancer, and the American Academy of Dermatology recommends letting your nails grow out every so often to give them a break — some commenters on Reddit also noted that fake or enhanced nails made their situations worse, a fact to which medical professionals have attested.

Ivy told Mic her nail extensions curbed her picking but they haven't made her skin much better. "It was not really my experience that I got fewer pimples from taking a break at picking," she said. "For the week that I had fake nails, I tried to replace my picking with exfoliating, and it made the problem a million times worse."

Taking anxiety into one's own hands: Preventing picking doesn't necessarily get to the root of the habit, the reasons for which can vary between individuals.

"Cognitive behavioral therapy and medications can be helpful treatment options [for dermatillomania]," psychiatrist Marlynn Wei told Mic. "Issues like anxiety and depression can make picking worse, so it's important to get any underlying issues treated."

But for those seeking ways to address their anxiety-related habits on their own, one solution to the picking problem may lie in their very hands.

My attempt with fake nails worked wonders. When I felt anxious about work or a relationship, I'd still notice myself fidgeting at my face. But because the nails made it hard to do actual damage, gradually over the months, the habit reduced drastically. My skin is clearer than it has been in years, and my nails make me feel glamorous. It's a win-win — for both my sense of beauty and my mental health.

* Last names have been withheld to allow subjects to speak freely on private matters.