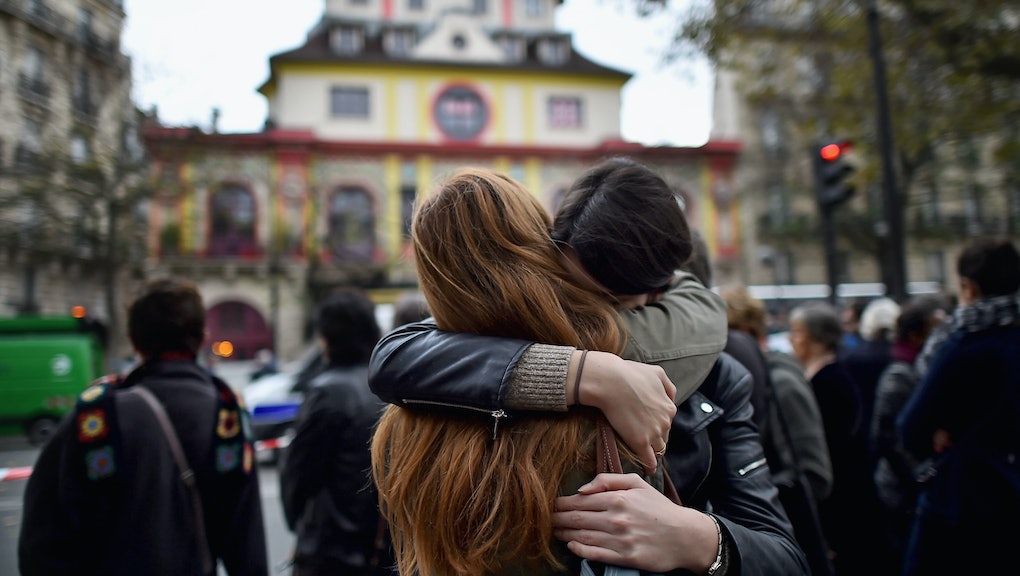 After Paris Attacks, Fears Linger as Parisian Life Goes On

Two days after the terror attacks in Paris, an event that cast a shadow over the City of Light, many in the French capital were looking for any indication, however small, of a return to normalcy. On Sunday, shops and cultural sites began reopening. Families strolled down the boulevards, and people walked their dogs in the sunshine. Many schools were expected to operate as usual on Monday.

Despite the feeling that life in Paris would go on, an air of fear persisted. "We are all between nervousness and an attitude that we don't want to let the extremists win," Megan Briana, a 32-year-old American working at an international school in Paris, told Mic. The Paris Briana saw in the days after the attacks didn't resemble the city bustling with motorcycles, car horns and laughter she'd come to know as an expat. "People are somber, shocked, nervous, but determined," she said.

Claire Baudouin, a 24-year-old Île-de-France native who studies publishing and broadcasting at the famous French university the Sorbonne, echoed a similar sentiment. "There is a before and an after Friday, November 13, for sure," Baudouin told Mic. For the time being, Baudouin said she planned to avoid cinemas and shops, and would opt to walk over taking the Métro, but that her typical rhythm of life would eventually return.

Bruised and grieving, Paris residents from all walks of life found solace through solidarity in the aftermath of the attacks. "People are very united," Boudouin said.

A dark night: For Parisians, Friday was a nightmare come to life. Bloody assaults carried out by terrorists linked to the Islamic State group, or ISIS, erupted at France's national stadium, the Stade de France; cafes in the 10th arrondissement and at a popular music venue, the Bataclan concert hall. The attacks left at least 129 dead, 352 wounded, including 100 in critical condition. The lucky ones watched the harrowing series of events unfold from a distance.

For Baudouin, Friday night began quietly enough. When the first sign of disaster surfaced, Baudouin was at her family's home in Paris' 13th arrondissement, speaking on the phone with a friend in the 11th district, a Parisian neighborhood that became the backdrop for one of the attacks.

The conversation ended abruptly when shots rang out on the other end of the line. "I did not quite understand at first," Baudouin told Mic. "When I hung up with my friend, I immediately looked online." Yet before word of what was happening hit the wires, Baudouin and her family heard the sound of police sirens and ambulances to corroborate the fact that a tragedy was unfolding in their city. "One felt that something was happening," Baudouin said.

Meanwhile, northeast of the Baudouin family home and closer to the scene of the concert hall and cafes under attack, Matuidi Charo Benz, 30, was working the overnight shift for a taxi company. Moments after dropping off a client on Boulevard Voltaire in the 11th arrondissement, Benz heard the sound of explosions.

It didn't take long for word of the fatal attacks to spread.

Reality settles in: At nearly the same hour, Briana happened on news of the terror attacks by chance. Having just completed the first chapter of her dissertation in French, the Pennsylvania native joined friends at a cafe on Rue Boissy-d'Anglas, not far from the American Embassy in the eighth arrondissement, to celebrate.

Seated near two young Frenchmen outside the cafe, Briana overheard them say, "We've been attacked. They bombed the Stade de France."

"I went to sit with them to watch the news on their cellphone," Briana told Mic. "Police sirens started going down Boulevard Malesherbes like crazy. We all went inside the bar and thought the staff and owner were visibly nervous and stressed."

"I called my friends who live in the 10th, 11th and 20th [arrondissements] to make sure they were safe," she said.

Settled blocks away from Paris' iconic Place Vendôme, home to the Hotel Ritz and world-famous diamond sellers, and where models dripping in furs habitually sport precious rocks for glamorous advertisements, Briana and her cohort were stuck like glue to the cafe's television, watching the horror unfold for hours.

Close to midnight, Briana took the train home. "There were very few people around and the mood in the Métro was very tense," she said. "But nothing happened. I got home and cried and called my family and friends."

Nearer the scene of the attacks, and as the reality of what was happening began to dawn on Parisians, many rallied to offer aid. From 11 p.m. until 4 a.m. Paris time, Benz worked for free, shuttling shell-shocked passengers to their homes. "I wouldn't have dared to ask clients to pay me," Benz said. "It is not humane to take advantage of the misfortune of others to make money."

Paris grinds to a screeching halt: Overnight on Friday, media outlets around the world began to piece together the night's events. Paris awoke to a somber scene. Shops shuttered their doors and residents were advised to refrain from congregating.

"Some shops in big malls are not open or not so in full capacity," Axel Perrson, a conductor for SNCF, France's train transport system, told Mic, adding that the government advised portions of the workforce to stay at home.

Transports were running on a normal schedule, Perrson said, but weathered approximately a dozen closures in Paris' Métro stations.

"On Saturday, when we went out, the streets were deserted," Baudouin said. "The streets are still empty, at least in our neighborhood. The government encourages people not to gather."

A godless act: "What happened at the Bataclan, mon dieu," Baudoin said. And "my God" is right, but whose God?

During the assault on concert-goers at Bataclan, witnesses say multiple gunman shouted "Allahu Akbar," Arabic for "God is great," as they fired multiple rounds into the darkened audience. In the days that followed, the terrorists' ties to radical Islam sparked a larger debate about how the attacks might perpetuate Islamophobia.

France is not alone in its grief. Just one day before the deadly events that rocked the French capital, ISIS waged a brutal attack on Beirut. Many users on social media pointed out that the Beirut attacks seemed to receive much less media attention than did the attacks on France, despite the comparable carnage. The Islamic State group's attack on Beirut killed 43 and injured 239 more.

But according to Perrson, political discourse was not immediate in the aftermath of the attacks. What happened in Paris was "inherently political," Perrson said, and related to "the government's military intervention in Syria."

"But that is not what is being debated for now," Perrson said. "Now, all the mourning and national unity is being hammered through."

The aftermath: According to Briana, Paris — and to an extent, all of France — felt united in the days following the attacks. She recognized Parisians' shock because she witnessed it firsthand, when "disbelief" drew hundreds out to the sites of the attacks to lay flowers, light candles and witness public displays of solidarity.

"The city I love and the country I call home may be hurt right now, but I know Parisians: We will rise and we will continue," Briana said. "We need to digest this, to understand it. I think we are all in shock."

"Fortunately there is a lot of solidarity between us, because [on Saturday], I went to a blood donation center," Benz said. "I stayed all morning to wait my turn. There were a lot of people there."

"In the end, it's [about] communicating with one another," Benz said. "Above all, we must not make amalgams. Like everyone else, there are the good and there are the bad, in all religions and communities. And the French people are smart enough to know the difference."

What happened in Paris on Friday was an experience that he wouldn't wish on anyone, Benz said — "not even my worst enemies."