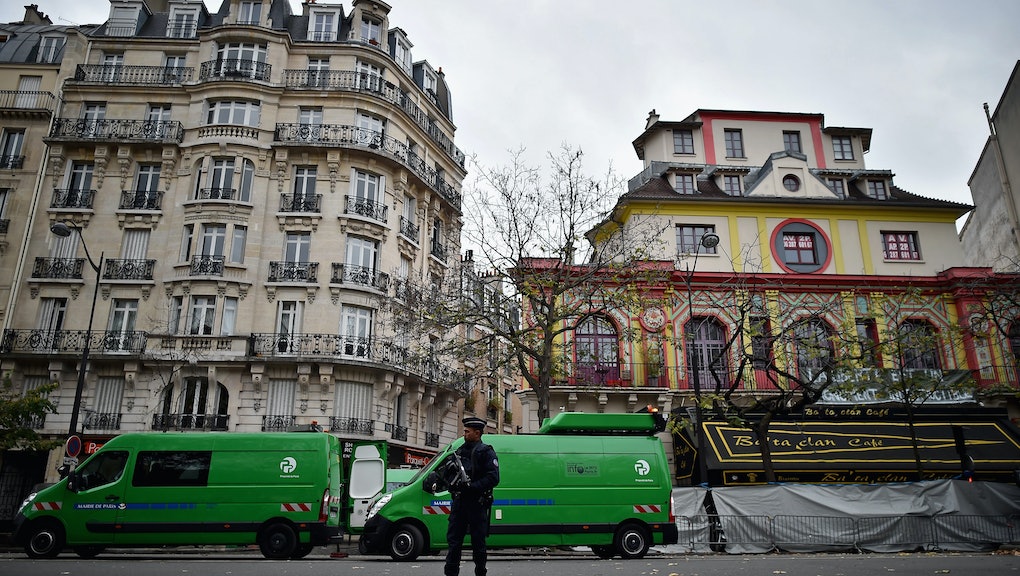 Could a Paris-Style Attack Happen in the United States?

As the world reels from Friday night's Paris attacks, Republicans are wasting no time in using them to justify a familiar lurch to the right on immigration and national security.

Presidential candidates Jeb Bush and Ted Cruz have warned that only Christian refugees from Syria can be trusted, while Dr. Ben Carson has recommended abandoning the region's refugees altogether. Florida Sen. Marco Rubio said the United States should treat the attacks as a wake-up call. "This is a clash of civilizations. Either they win or we win," he tweeted. On the state level, more than 20 Republican governors (and at least one Democratic one) have said they will attempt to deny Syrian refugees residency in their state.

During Saturday's Democratic debate in Des Moines, Iowa, the Democratic candidates struck a more measured tone. While they were strikingly vague in rhetoric about how they would eliminate ISIS, a consensus emerged on the need for multilateralism in a military response, as both Hillary Clinton and Vermont Sen. Bernie Sanders stuck to their commitments to accept 65,000 Syrian refugees.

The caution exhibited by the Democrats is a healthy sign that there is, at least for now, the possibility that the U.S. won't necessarily dive headlong into another major intervention in the war-torn region. But there's another question that is lingering as well — could a Paris-style attack happen in the United States? Should we be as concerned as Europe is? Europe is, after all, geographically much easier to strike from ISIS' base in Iraq and Syria, and the influx of refugees there is simply incomparable to any such movement from the Middle East to the U.S.

Mic spoke with Heather Hurlburt, a policy director at the New America Foundation who worked in the State Department and the White House during the Clinton administration, to discuss what the Paris attacks mean for Europe and what they mean for the U.S.

Mic: As far as operational capacity and opportunity for attack, how does ISIS's ability to attack Europe and the U.S. differ?

But ISIS has a number of advantages in Europe. Number one, there's a patchwork of security agencies that still don't seem to communicate with each other as well as they like, so you have more opportunity to elude somebody putting all the pieces together. You also have a much larger pool of people in which a small group of extremists can move around than you do here, people who speak the same language and know the same culture. And you have more ways to get back and forth to a conflict area where there are camps and training areas and "safe zones," than as compared to the U.S.

The U.S. government estimates that something around 250 Americans have gone to join ISIS. That's not too far from the number that have gone from Belgium alone, which is, of course, a much smaller country than the U.S. I believe more than a thousand are thought to have gone from France.

The number of people who are both radicalized and have had paramilitary training from ISIS is just much larger in Europe.

Mic: On an ideological and geopolitical level, is there any reason ISIS would prioritize Europe over the U.S.?

HH: One reason is simply targets of opportunity — attacks that succeed are more impressive than attacks that fail, and big attacks are more impressive than small attacks. There may be a perception that European governments are more vulnerable to fear-based pressure than North American governments are. There may be the perception that hitting Europe would have exactly the opposite effect of what this is going to have.

There's one other geopolitical reason that I should mention. Given that you had a larger flow of recruits than Europe, and that recently the flow of recruits has actually been slowing down, that ISIS has been getting fewer Westerners to volunteer than they were six to 12 months ago, there may have been the perception that a big attack in Europe would be a good recruiting tool.

Very few refugees get to the U.S. as their first stop — you don't leave Syria on a boat and wash up in Florida.

Mic: Tell us a little more about the way in which ISIS has actually owned this attack. Has ISIS tied this attack to a specific set of grievances against France in the way, say, al-Qaeda tied 9/11 to America's presence in the Middle East?

HH: France's policies are not what you might assume they were. France, of course, opposed the war in Iraq, and it's perhaps the biggest supporter of the Palestinian cause in Europe. So when you think of the classic irritants in U.S. relations with the Arab world, the French are not on the same side of either of those.

But it's been clear since at least the summer that are a significant number of French nationals who have gone to ISIS, who are very eager to take the fight to France. France was actually more hawkish than the U.S. in terms of pushing for military actions to oust Gaddafi in Libya, and France is identified as the colonial power across a swath of the Arab world.

There is a specific quarrel that these extremists have with France, and it falls under the same broad rubric. But it comes back to different specific than the quarrel they have with the U.S.

Mic: The Paris attacks have already begun to reshape the conversation around refugee policy in the U.S. What's your response to Republican governors and presidential candidates saying we should ban Muslims and Syrian refugees, or ban refugees from the region altogether?

HH: It is incredibly frustrating and short-sighted.

One Syrian passport [found near the attackers] seems to have come into Europe through a refugee registration process. But we don't understand what relationship that passport had to the attackers. [Ed. note: At least one of the attackers entered Europe using a fake Syrian passport.] The idea that you should make policy based on that really flies in the face of any commitment to evidence-based decision-making.

The U.S. has incredibly rigorous procedures for admitting refugees, and if you are a refugee and your background can't be checked, you just don't get in here. You get left in the camp in Lebanon or Europe or Turkey or wherever you're applying from.

The way refugees come into the U.S. is really different from the thousands of thousands of people washing up on Greek islands. Very few refugees get to the U.S. as their first stop — you don't leave Syria on a boat and wash up in Florida.

What happens in general with the U.S. is that you get somewhere else, you're in a camp and you're already under the supervision of the United Nations. When you're asked, "Where you would you like to apply for asylum?" you have to say, "I'd like to apply to the U.S."

Frankly, the U.S. can pick and choose who it lets in. We're somewhat resented by the rest of the world for this, because the Greeks and the Jordanians can't really pick and choose. But the U.S. can say, "Well, send us a couple hundred people who have some documents or back stories that we can vet."

There are so many Christians, Buddhists or Muslim from other parts of the world who need to flee to the U.S. that this demonizing of refugees — no matter what we find out about what actually happened with its relation to the attacks — is really unforgivable and, frankly, terribly un-American.

Mic: France has stepped up bombing of ISIS strongholds in Syria. In the U.S., pressure to ramp up targeted attacks on ISIS will likely only get stronger. ISIS' political and military capacity might possibly get weaker, but what do you think some of the unintended consequences of an escalation of force could be?

HH: There's this dance between trying to degrade ISIS's capacity, but at the same time not making ISIS attractive for more people to volunteer to join.

One thing you want to watch carefully for is not bombing civilians, and not doing things that make it easier for ISIS to say, "We're being persecuted," and that, yet again, this is all just about killing Muslims.

Another significant challenge is that, if it was possible to defeat ISIS with airpower alone, ISIS would be gone by now. Once they've installed themselves in communities, they probably won't be dislodged without ground forces, and a historical challenge has been making sure that the cure isn't worse than the disease.

In other words: Who do you empower? Who do you support to do the ground forces part of your fighting? What kind of regime do you set up in ISIS' place? How are the civilians who have allowed ISIS to come in and occupy their territory, how are they treated? None of that is easy or simple.

Stay on top of news that matters by signing up for the daily email news briefing.