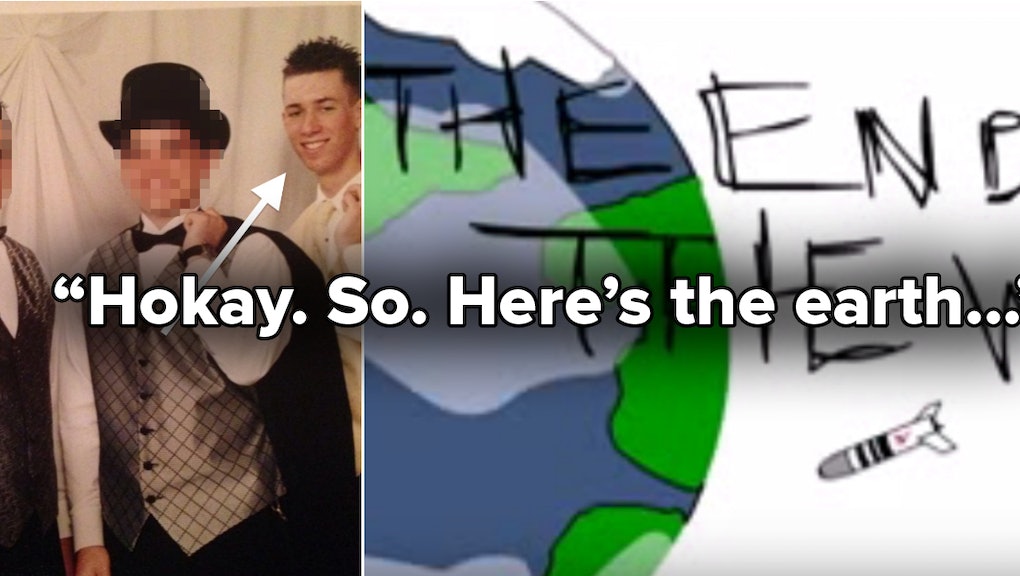 12 Years Later, Here's What Happened to the Viral Mastermind Behind 'The End of the World'

If you were on the Internet in the early aughts, you probably already know exactly where the above sentence comes from. It's the first line from "The End of the World," the zany 12-year-old animation that depicts an imagined scenario in which the countries of the world come together to, well, destroy each other. The nasally voiceover is unmistakable, as are the crude and colorful sketches.

Along with other prehistoric gems like the Numa Numa guy, "All Your Base Are Belong to Us" and Badger Badger Badger, "The End of the World" is often considered one of our earliest viral videos.

"WTF, mate?" "But I am le tired!" and "FIRE ZE MISSILES!" — these immediately recognizable lines all come courtesy of "The End of the World." But for some time, little was known about the video's creator — until it was revealed that animator and filmmaker Jason Windsor was the teenage mastermind behind the viral hit.

Mic recently spoke to Windsor, now 31, about the animation's origins, the consequences for his own career and the evolution of viral videos on the Internet.

Mic: Could talk a little bit about the process of the creation — how you got the idea for it, who you worked with, and how you put it into motion?

Jason Windsor: It was circa 2003 or so, and I had just graduated high school, and some friends and I were hanging out late at night and talking about the state of the world. We were at a park, and we started drawing pictures of missiles flying from one side to another with tanbark on the sidewalk. It was that period in time when really crappy flash videos were the thing. I just basically laid down the voiceover myself. The process wasn't much more than just like, recording the voiceover and then sort of going through and making crude flash drawings.

So after you created the video, how did you get it out there? Was it on albinoblacksheep.com at first?

JW: So it was on that site and, I feel like, eBaum's World. This was pre-YouTube, so places like that were starting to curate Flash videos and stuff. It doesn't even really have my name on it or anything. I sent it internally — I didn't actually post it anywhere. I sent it to some of the same friends — this was back in the days of, like, pirating and Napster — and one of my friends had all of his channels overseas for getting pirated music and stuff. He sent this to some of his people, his hacker people overseas, and somebody somewhere eventually posted it. It made its way online somehow, but I'm not exactly sure how.

What was the timeline from when it initially came onto the scene to when it totally blew up?

JW: Gosh. Less than a year.

What was the response like? Did you gain any sort of notoriety from this video, from the audience?

JW: It was a little later, in 2004, that I got one of my first freelance gigs with [advertising firm] Wieden+Kennedy working on some Nike spots. And that was basically because of the animation. The creative director who was working on those Nike spots called me and was basically wanted to do the same type of thing. And this was when, like, a lot of marketers and ad agencies were like, "Oh, viral videos! We need to figure out what to do with viral videos! That's the thing!"

Some people will occasionally quote it and be like, "Oh, I remember that video!" It's always surprising when that happens, because I didn't intend for it to go anywhere. The widespread-ness of it is kind of cool. It's kind of weird how it became Internet-popular.

Do you think that it launched your career in that way?

JW: Kind of. I was heading in the direction of animation and filmmaking, live action, that sort of thing. And so to get connected, especially with Wieden, early on, was huge. But I felt like I had a little bit of a tug-of-war early on, because I was getting gigs that wanted that sort of style of animation, and I was like, no, I want to make something cool and flashy and design-y!

Were there any negative consequences in terms of your career and the path you ended up going down?

JW: As soon as my mom saw it, she was horrified at all the foul language. But I think she's gotten over that. If you go on the YouTube comments, there's a good mix of people who love it and people who think it's the worst thing that's ever been created. YouTube comments are a good place to humble you a little bit. I feel like the world got over the crudely animated Flash video. It had its heyday and then we naturally got out of it.

Given its timing — you created it in 2003 — this was post-9/11 and around the time of the invasion of Iraq. Did that influence the content you put into the video?

JW: Yeah, definitely. I think we were already in Iraq. [Editor's note: The invasion occurred from March to May 2003.] Basically, we were talking about the state of the world, especially with nuclear weapons. Some things have changed since then, and some things haven't, but I think it was just that sort of... "What's going to happen?"

Some of the actions we were taking as a country were questionable in our minds, and just seemed like we were doing what we've done a lot of in the past, which is to go somewhere and create more enemies for future generations.

Was it a conscious choice to leave your name out of it?

JW: [Laughs] No. And I probably wouldn't have wanted any YouTube money, so I wouldn't have put my name on it. But, you know, maybe I would have if I had known it would have gotten quite the traction that it did. But, no, it was just sort of like, oh, damn, there's 1,000 hits on this thing already, and I didn't realize it!

But this was before the era of monetizing content on the Internet.

JW: Totally. Who would have known?

How did your name eventually get attached to it?

JW: I don't know exactly. The dude who tracked me down from Wieden, he used Internet magic or something. I had a personal portfolio website at the time that it somehow got linked to. There was also a website that someone put up, like, endoftheworld.net. [Editor's note: The website that sits at that URL is slightly different now.] It had a little blurb that was like, this video was created by someone named Jason Windsor; if you know anything about this person, send an email. But no, I'm not exactly sure. The Internet is a pretty amazing place.

It certainly is for things like that. Do people still refer to you as the "End of the World" guy?

JW: I think so. I work for a shop that does Web explainer videos, and there are a couple of other designers that work there that knew of [the video] when I started working there, and they would say, "I need to take a picture of you to send to my college friends because we used to watch this video."

Did you make any money off the video?

JW: Oh, yeah. I made a bunch of money — at least a bunch of money for a 19-year-old, for an entry-level animator. I made the most money off the voiceover. I had to join the Voice Actors Guild and was getting residual checks. Total, between those two: maybe like $25,000, from that first job, over the course of a few years.

But you didn't make any money off of the video itself?

JW: No. From "The End of the World" itself, I got nothing. Yeah, that [profit] would have been from jobs after.

That's a shame. It was so popular!

JW: Yeah. [Laughs] That's what I was saying. If I had known it would get several million hits on YouTube, and that I could have monetized that, then maybe I would have put my name on it.

Do you think that there's a formula for a viral video? If there were to be a recipe for it, what would be involved?

Viral content has become more commercialized, whereas back when your video came out, it was this new thing that people weren't as accustomed to. Without being too reductive, it was a bit more of an innocent time — it wasn't about making money, and it wasn't about selling things.

JW: Oh, totally. And even with the Nike spots that I did [after], they were trying to reference that same style. I feel like the response in general was basically that, uh, we can tell what's going on here — this is a Nike ad that's trying to look like this other thing. Sellout, sellout, sellout! That sort of thing.

What do you make of the timing of the video's release? Do you think it played a role in ushering in a new age for the things that are popular on the Internet?

JW: I like to think that it helped the progression of funny Flash videos and animated Internet videos. As far as ushering in a new age, I don't know. I hope that it progressed that medium, anyway. But that's sort of how things are on the Internet — it's so exponential, a bunch of people see one thing, and then it just — it is so explosive.

What happened after "The End of the World"? What are you working on now?

JW: I went to film school in Portland, and I've made a few short films. I'm working for a shop right now doing explainer video animation. But yeah, I'm still animating, still working in live action, raising my 18-month-old. And yeah, that's about it.

This interview has been condensed and lightly edited for clarity.