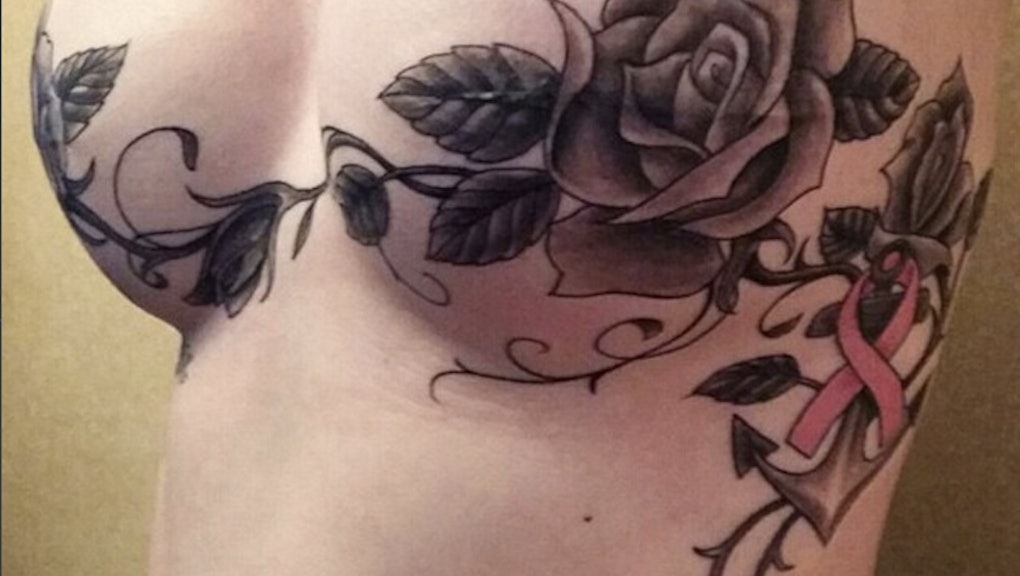 Why Did Instagram Ban Photos of These Breast Cancer Survivors' Post-Mastectomy Tattoos?

In 2010, tattoo artist Amy Black was cold-called by a breast cancer survivor seeking a post-mastectomy nipple tattoo. Although Black had never created such a tattoo before, the experience inspired her to launch a private donation fund that evolved into the Pink Ink Fund, a nonprofit organization that provides post-mastectomy tattoos for cancer survivors and people who have reconstructive surgery after a BRCA diagnosis.

Naturally, Black has a social media presence for her work. But what she interpreted as an attempt to share inspiring images and build a community among survivors has apparently been deemed offensive by Instagram: The social media platform inexplicably deleted the Pink Ink Fund's account on Saturday.

She's hardly the first. Plenty of social media platforms have notoriously crusaded against images of women's nipples for years — a double standard against which activists, like those involved in the #FreeTheNipple movement, have persistently rallied.

"Why can you show public beheadings from Saudi Arabia on Facebook, but not a nipple?" #FreeTheNipple leader Lena Esco wrote in 2013, after Facebook and Instagram banned photos of topless women she had posted. "Why can you sell guns on Instagram, but yet they will suspend your account for posting the most natural part of a woman's body?"

Somewhat ironically, Black was very aware of these bans and had consciously taken a stand against them. When she first launched the Pink Ink Fund's social media platforms, Black would "very carefully post [photos] on Facebook and then on Instagram occasionally," she told Mic.

At first, she "was afraid to show anything that was a nipple even if it wasn't real" and only shared "other artists' work or informational posts" for fear of being censored.

But once public figures started pushing back on these ridiculous standards, Black reconsidered. She was especially inspired by Scout Willis, who staged a protest in response to having her topless photos frequently removed from Instagram in 2014.

"If she's going to come out and make some noise about being able to show the female breast on social media then so was I," Black recalled.

It seemed that Instagram had acknowledged the efforts of users like Willis and Black: The platform updated its guidelines to allow images of breastfeeding and mastectomy scars in April and, in October, Instagram blamed Apple's App Store for their stringent policies. Similarly, Facebook lifted its ban on images of breastfeeding in 2014 — but failed to extend the policy to include women's nipples in other contexts.

More than pretty pictures. Despite this supposed progress, Black's experience reveals that this double standard is not only alive and well, but it's damaging important online communities. Black's Instagram hardly existed for self-promotional purposes or to disseminate lewd images: The Pink Ink Fund's online presence provided breast cancer survivors with vital resources and inspiration.

"I had been wanting to post some of the mastectomy [photos] for so long because nobody was doing it," Black said. "Plastic surgeons weren't doing it that often and I had met so many survivors who had no resources for it. And I also wanted to spread awareness that there were other options for these people."

Soon after she decided to forge ahead, Black found her instincts were right.

"It's been a great resource," Black said, explaining that the images she posted gave survivors "hope when they were about to go through their mastectomies," and "inspired" many survivors to pursue get tattoos themselves, and functionally helped connect "people to artists ... and artists to survivors."

Bans have got to go. That Instagram deemed these images inappropriate is not just damaging to this particular community, therefore, but also reinforces a broader gendered double standard.

"Equality in terms of toplessness applies to the censorship of women's bodies on social media, the issue of equal pay or the stigma against breastfeeding in public," Lina Esco, founder of the Free the Nipple movement, told Mic in May. "It all falls down in the same category, which is equality."

And Black is hardly willing to accept this treatment. She started a new account and has launched a hashtag (#BringBackPinkInkFund) to raise awareness about her specific case as well as the broader, gendered double standard inherent to social media censorship. And, hopefully, her effort is just the beginning.

"I feel like there needs to be something more done with social media," she said. Instagram knows "how big a resource they are ... they have a huge impact on society," she said, adding that it's high time their ability to make "these kinds of really harsh, weird decisions," come to an end, once and for all.