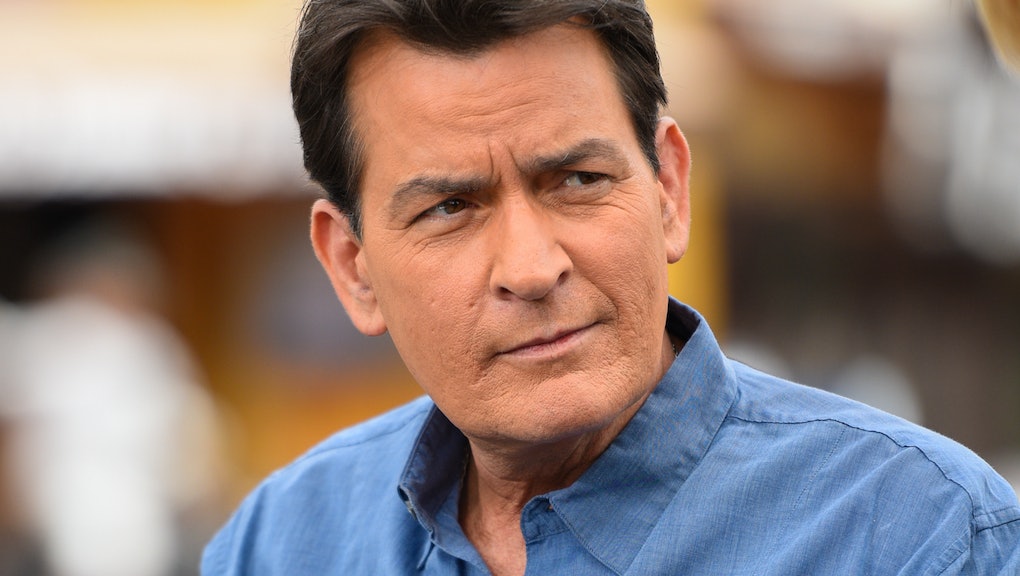 On Tuesday, Nov. 17, 2015, actor Charlie Sheen revealed on the Today Show that he had been diagnosed with HIV.

"I'm going to admit that I am, in fact, HIV-positive," the 50-year-old actor, who said he's been living with HIV for four years, told host Matt Lauer. "And I have to put a stop to this onslaught, this barrage of attacks, of sub-truths."

If you live on the Internet, the revelation that Sheen has been living with HIV wasn't exactly surprising, in light of recent blind items speculating that a famous Hollywood actor was about to disclose his status after years of living with the virus. What was somewhat surprising was that, unlike celebrities like Magic Johnson who have disclosed their status and been heralded for their bravery, people immediately rushed to point fingers at Sheen, shaming him for his sexual braggadocio (he once claimed to have slept with more than 5,000 women, according to Maxim) and chalking up his diagnosis to his hard-partying behavior.

"I always led with condoms and honesty when it came to my condition," Sheen told Lauer, though he did admit he had unprotected sex with two people who knew about his status beforehand.

In an apparent display of schadenfreude, the Internet joined a shaming chorus, linking Sheen's status to his "lifestyle" and maligning the "hookers" who may have infected him with the virus:

Blaming "bad" behavior: Unlike Magic Johnson, Sheen is far from an exemplary, "ideal" public figure with an STI, whatever that might entail. Sheen has long struggled with drug addiction, mental health issues and he has also been arrested for domestic abuse against ex-wife Brooke Mueller, as well as a slew of his former sexual partners. A viral, meme-generating meltdown in 2012, which Sheen admitted in the Today Show interview was the result of "'roid rage," did little to render him sympathetic in the public imagination.

Yet, even though Sheen isn't exactly a sympathetic figure, STI activists and advocates are concerned about the sensationalist media coverage of his diagnosis. "I'm really concerned by the gleeful, judgmental coverage I'm already seeing of a polarizing celebrity getting HIV," writer and STI activist Ella Dawson, who has written extensively about her herpes diagnosis, told Mic.

"There tends to be a tendency with HIV-related stories to really become obsessed with an individual's behavior and try to turn them into a cautionary tale and really get focused on the problem, rather than discussing the solution and discussing this from a compassionate perspective," Jeremiah Johnson, an HIV prevention research and policy coordinator at the New York City-based Treatment Action Group, told Mic.

"I'm not a fan of Charlie Sheen — he's an abusive, violent misogynist — but making jokes about how he'll need more than 'tiger blood' to survive, as some outlets have already cracked, is dehumanizing and disgusting," Dawson added. "We as a society consider people living with STIs to be amoral, dirty and dishonest. Tabloids will have a field day reinforcing that stereotype through Sheen. And the women he has been involved with will absolutely have their privacy invaded and their choices held up to scrutiny."

The stigma against sex workers: Indeed, it's Sheen's former sex worker girlfriends who are currently being smeared on social media — despite the fact that Sheen himself told Matt Lauer he's not certain how he contracted the virus.

While an anonymous source allegedly close to Sheen speculated that he contracted the virus from "high-risk sex practices," attributing Sheen's status to his predilection for sex workers stigmatizes not only his STI status, but also an already marginalized, extremely vulnerable sector of the population.

"I'm concerned because Charlie Sheen has a history of having sex with sex workers, there will be a push to vilify those decisions and vilify people who engage in sex work," Johnson said, "without discussing the broader context for why sex workers are at increased risk: because we force them to be invisible."

Part of the reason why sex workers are rendered invisible is because sex work is criminalized everywhere in the United States, with the exception of a few counties in Nevada. That drives the work underground, forcing sex workers on the street and rendering them more vulnerable to violence and sexual assault.

That invisibility can put sex workers at a higher risk for contracting STIs, reinforcing the stereotype. Sex workers are at higher risk of contracting STIs like HIV than other members of the population on an international level. But the reasons why are more complex than we realize. Many sex workers have little access to health care, while the ones who do often face stigma and judgment from providers. In many states, police officers are also instructed to arrest women for carrying condoms on the grounds that carrying a condom is in itself evidence of doing sex work.

Moreover, given the high risk related to sex work, the industry and many people involved take a notably conscientious approach: Despite sex workers having a higher number of partners than the average person, statistics show that consistent condom use has proven effective in curbing STI rates among sex workers, cutting transmission rates in half in Mexico.

There's some evidence that as a result of having a higher number of sexual partners, many sex workers are actually more likely to use protection than so-called "civilian" members of the population. "Anecdotally, when I've talked to people who worked with sex workers in the United States, there's a sense that many sex workers have managed to work around the risk related to HIV and managed to adapt," Johnson told Mic.

"Many escorts and dancers don't access appropriate medial care or even basic testing services. Those who do, depend on Planned Parenthood and other nonprofits for free screenings and care. Though not many will disclose their sex work status for fear of stigma or being reported in some way."

At press time, it's unclear how Sheen contracted HIV. "Sitting here today, not entirely, no," he told Lauer when asked during the interview.

What is clear, however, is that because Sheen is not a "sympathetic" HIV-positive person, and because many of his former sexual partners are on the fringes of society, many are comfortable shaming him — and his partners — for his status, rather than using his diagnosis as an opportunity to launch a wider conversation about, say, drug addiction or safer sex practices.

And that reverberates for other people facing STI diagnoses themselves. More than 1 million people contract an STI every day, according to the World Health Organization, with 19 million STIs thought to occur in the United States per year. Nearly 35 million people live with HIV worldwide, according to WHO.

Yet despite how common STIs are, our culture continues to shame people who have them.

"Our culture people love to focus on sensationalizing these stories because it really echoes our shameful opinions about sex and long-standing sex-negative attitudes," Johnson told Mic, comparing Sheen's coming-out narrative to that of actor Danny Pintauro, who came out as HIV-positive earlier this year and claimed he contracted the virus from oral sex.

"We become obsessed with the individual's behavior and boil them down to being a virus or a viral vector. Ultimately, the message that comes out is 'Here's a bad person. They did bad things. Don't do what they did.' Unfortunately, that messaging doesn't help anybody."

It certainly doesn't help Sheen, or his partners.