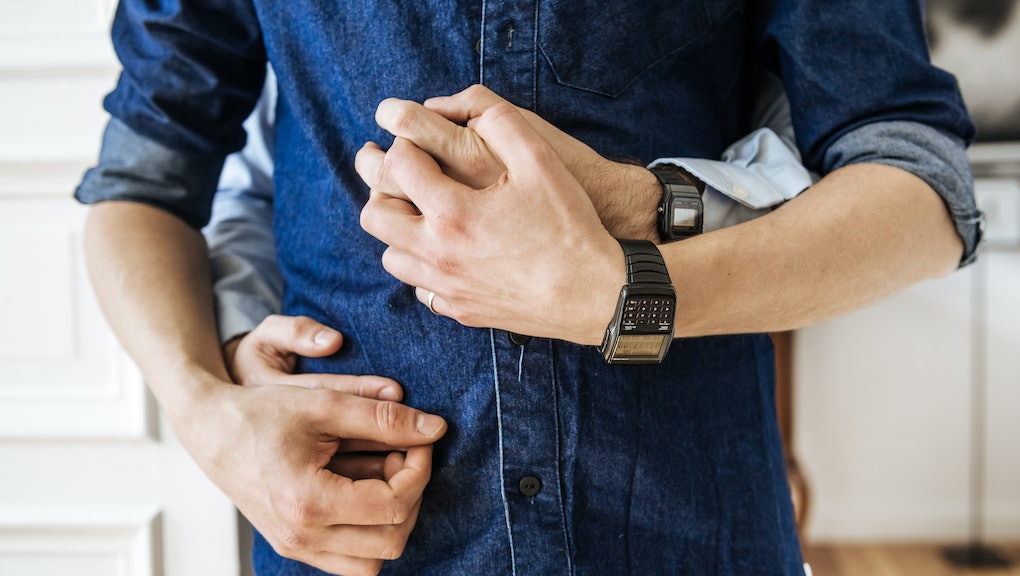 "I'm here to admit that I am in fact HIV positive," Charlie Sheen told Today host Matt Lauer on Tuesday morning, lending veracity to a recent flurry of rumors regarding the 50-year-old actor's health.

Sheen revealed to viewers that he has been living with the virus for the past four years, and that, with the help of "condoms and honesty," it hasn't prevented him from having a full sex life. He claimed that while he has had unprotected sex with two of his former partners, they were aware that he was HIV-positive beforehand and did not test positive for the virus.

While Sheen's story is obviously unique in many ways, his admission raises an interesting question about serodiscordant (or mixed-status) sexual relationships, in which one partner is living with HIV and the other is not: How do IRL mixed-status couples make it work?

Activist Joshua Gault and boyfriend Chanse Kyle are a gay couple in Shreveport, Louisiana. They were both just 19 when they found out Kyle carried the virus after they got tested together, back in July 2014.

"He grabbed my hand and pulled me to the back and gave me a big hug and told me, 'Josh, I came back positive,'" Gault told Mic of the day Kyle's diagnosis came through. "I said, 'Babe, I love you, this sucks, but I am going to be with you through everything.'"

From there, they worked with a case worker to figure out next steps and treatment options. Meanwhile, Gault opted to begin taking PrEP (pre-exposure prophylaxis), an HIV prevention drug that the Centers for Disease Control and Prevention describes as "a prevention option for people who are at high risk of getting HIV."

Gault remains HIV-negative to this day, and the couple's daily life is pretty much indistinguishable from those of same-status couples. "We are normal people living normal lives," Gault told Mic.

"We just take a few pills a day and go to the doctor."

Research has found that mixed-status (or serodiscordant) couples are able to be together without spreading the virus. In fact, a 2014 study tracked nearly 900 mixed-status couples with undetectable viral loads and tens of thousands of sex acts between them, and it found that not a single transmission of HIV had taken place.

That said, there can be a slight risk of transmission, as Charlie Sheen's personal physician, Dr. Robert Huizenga, an associate professor of clinical medicine at the School of Medicine at University of California–Los Angeles, said on Today.

In response to Sheen's claim that it would be "impossible" for him to transmit the virus to his sexual partners due to the undetectable levels of the virus in his blood, Huizenga said that's not entirely accurate. "Individuals who are optimally treated, who have undetectable viral loads, who responsibly use protection, have an incredibly low... it's incredibly rare to transmit the virus," he said. "We can't say that that's zero, but it's a very, very low number."

Despite these statistics in their favor, some mixed-status couples are occasionally forced to confront invasive health questions from outside parties that judge their relationship without knowing all the facts.

"In the beginning, people seemed very worried about him and his well being," Christina Rodriguez, co-founder of SMART Youth, a non-profit for youth living with and affected by HIV, told Mic of her own mixed-status relationship with an HIV-negative parter. "Which is understandable because I was as well! A struggle of mine has always been, 'How can I keep him safe?'"

Rodriguez said that treatment options have ultimately mitigated most of those health concerns, but she did mention that being straightforward with disclosure to her boyfriend in the early stages was a crucial first step to get to that place. "I needed to lay all my cards on the table," she said of their early days of courtship. "I didn't want to waste his time nor my time."

Indeed, disclosure is widely considered the most important step in having a healthy (and in many states, legal) mixed-status relationship. According to Sheen's ex-girlfriend, former "goddess" Bree Olson, Sheen might not have been as forthright with her about his diagnosis as he claimed, with Olson telling Howard Stern on Tuesday that contrary to what he told Lauer, "[Sheen] never said anything, ever" about being HIV-positive. (Olson later took an actual HIV test on the air, and the results came back negative.)

On the flip side, however, Rodriguez told Mic that once the virus is discussed between intimate partners, it really doesn't have to be anyone else's business. "I am not a secret, but it is also not someone else's information to disclose my status [or] my boyfriend's status," she said.

Beyond these unique challenges, though, Rodriguez indicated that, like Gault's and Kyle's, her relationship really isn't all that remarkable. In fact, the main areas of conflict in her relationship don't have to do with HIV, but rather typical couple stuff, she said, like "'Take me on a date! Stop looking at your phone! I miss you!'"