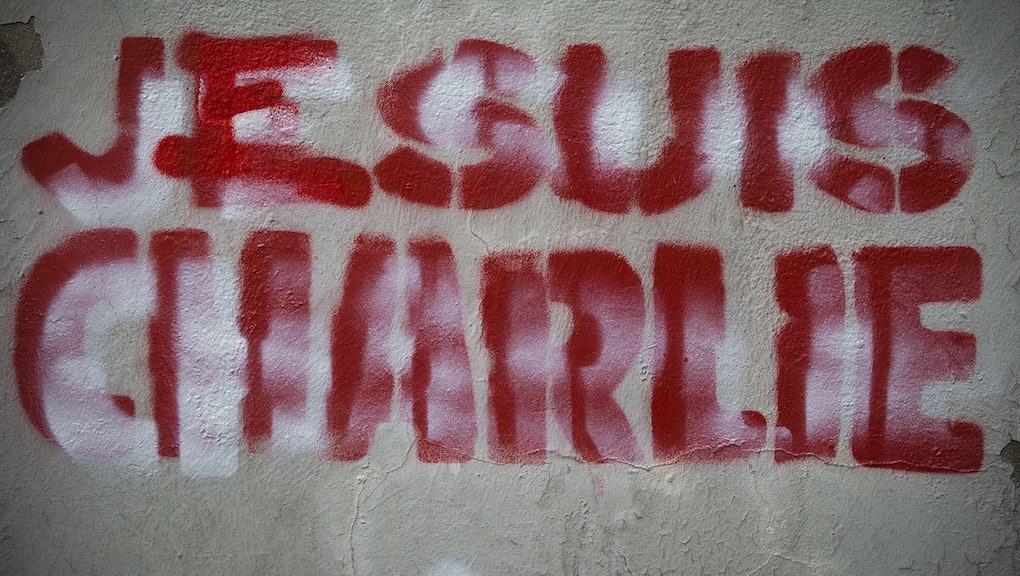 French publication Charlie Hebdo has unveiled the cover of its next issue, which responds to the deadly attacks the Islamic State group, or ISIS, carried out in Paris on Friday. The upcoming issue of the French satirical publication is scheduled to hit newsstands on Wednesday, according to Agence France-Presse.

In French, the cover reads, "They have weapons ... Fuck them, we have champagne!" Some translations put that a touch more lightly, reporting that the cover reads "screw them."

"Blood and tears, prophesied Churchill," Charlie Hebdo managing editor Laurent "Riss" Sourisseau wrote in an editorial that will appear in Wednesday's issue, AFP reported. "That's where we are. Without realizing it, the Parisians of 2015 have sort of become the Londoners of 1940, determined not to yield, neither to fear nor to resignation, whatever catches them off guard."

The French publication has become a symbol of counterterrorist protests since it fell victim to a bloody attack by Islamist extremists in January. Terrorists targeted Charlie Hebdo for publishing cartoons of the Prophet Muhammad on Jan. 7, shooting 12 journalists at the journal's headquarters in Paris.

Dr. Patrick Pelloux, a journalist who survived the Charlie Hebdo attack, was in the 11th district of Paris on Friday and was among early responders to the site of one of the attacks.

"The Samu [emergency medical serives], the hospitals, their staff, the firefighters, the police, we are doing everything we can to save them," Pelloux wrote via Twitter. "This is a war massacre."

Wednesday's cover is another indication that, when it comes to acts of violence, Charlie Hebdo refuses to be terrorized. The publication did not cease its publishing operations after weathering the deadly attack in January. "It's absolutely vital, they can't win," Pelloux said in the wake of the January attacks. "We are all suffering, with grief, with fear, but we will do it anyway because stupidity will not win."

Here's the first cover Charlie Hebdo published in the wake of January's shooting. In French, it reads, "All is forgiven."

Joann Sfar, a 44-year-old cartoonist for Charlie Hebdo, posted a series of cartoons to Instagram that describe the deeper meaning behind the choice of champagne in the cover's cartoon, and it has to do with something unequivocally french: joie de vivre, or "love of life."