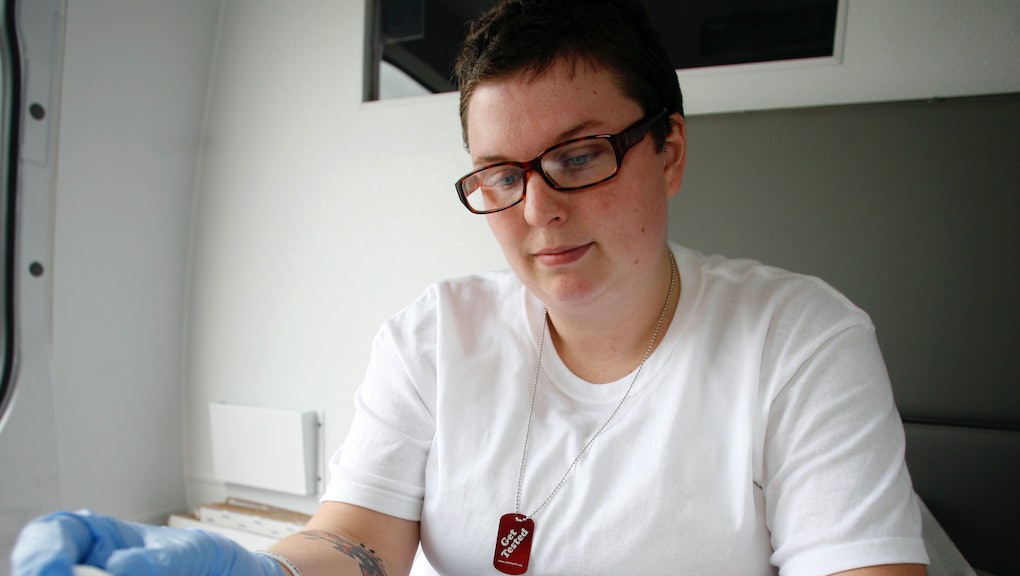 On Tuesday, Charlie Sheen appeared on Today to reveal that he is HIV-positive. The 50-year-old actor told host Matt Lauer he wasn't sure when he contracted the virus, but that he was diagnosed roughly four years ago.

"It's a hard three letters to absorb. It's a turning point in one's life," Sheen said on Today. "I have a responsibility now to better myself and to help a lot of other people, and hopefully with what we're doing today others will come forward and say, 'Thanks, Charlie.'"

Though he's perhaps the most high-profile individual to go public with his HIV status in recent years, Sheen is just one of an estimated 36.9 million people globally who were HIV-positive at the end of 2014. While the disease is still a major problem in many parts of the world — primarily Sub-Saharan Africa and parts of Asia — there have been some major breakthroughs, both medical and technological, in recent years.

This app is the creation of Aviro Health, a tech company that produces tools for better medical intervention. It's not designed for use by those with HIV, rather for the medical professionals who care for them — specifically nurses in primary care environments. The app allows them to identify whether a patient is suited for antiretroviral therapy, as well as determining which drugs are best and what the treatment timeline should look like.

Faster to Zero is the result of a new partnership between HealthEnabled, a South African nonprofit that advises national governments, and Knowledge for Health, which seeks to promote reproductive health services and education in developing nations. Broadly, the initiative aims to end the transmission of HIV between mothers and their children. Their weapon of choice? Tools like mobile phones, which will be used to "register pregnant women, send them weekly health messages and collect their feedback on the quality of health services," according to the press release.

Though this specific initiative is new, the idea of "getting to zero" has been around for some time. It's been the theme of World AIDS Day for the past four years, and there have been similarly prominent efforts to "end the epidemic," such as the United Nations' 90-90-90 plan and New York state's efforts to curb the virus.

As Mic's Mathew Rodriguez reported on Nov. 7, a breakthrough HIV treatment using injections instead of pills may make the lives of patients much easier. According to a trial conducted by Johnson & Johnson and GlaxoSmithKline, a shot received every four to eight weeks was just as effective as pills that are administered three times a day. According to Paul Stoffels, head of pharmaceuticals for Johnson & Johnson, the results could be "transformational" in the fight against the virus, Reuters reports.

Microbicides — "compounds that can be applied inside the vagina or rectum to protect against sexually transmitted infections, including HIV," according to the World Health Organization — can be used as an alternative to condoms for HIV prevention and allow women to control the method of protection used in sexual encounters. Though the WHO cautions that an effective microbicide is not yet on the market — recent clinical trials have been disappointing —  the organization also emphasizes that its development is vital.

Post-exposure prophylaxis is PrEP's later-use cousin: It's taken after possible exposure to the virus. It comes in the form of a month-long course of anti-HIV medication, and it can be used by health workers and individuals who have had sex without a condom, experienced sexual assault or used intravenous drugs, though it's not 100% effective. AZT, a widely used PEP, was approved in 1987.