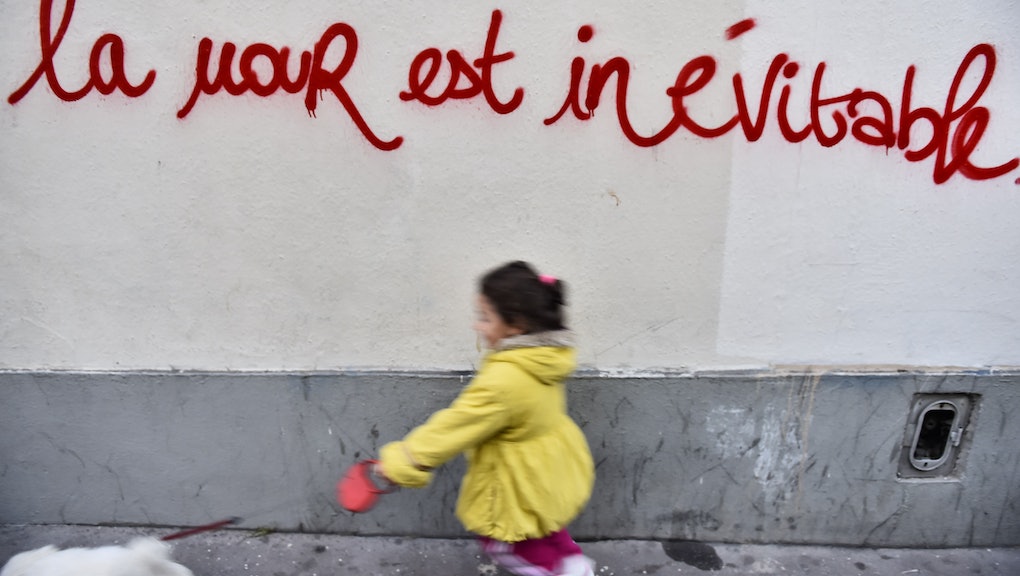 Beyond Paris: How Countries Across Europe Are Grappling With Extremism

Much like we saw in the United States after 9/11, a bolt-from-the-blue attack can change public opinion and a country's politics very quickly — less than 48 hours after the deadliest attack on French soil since World War II, French jets were dropping bombs on Syria.

But France is not an outlier. In the last four months, multiple countries in the region have faced attacks that have people drawing parallels to 9/11. Those parallels are right, insofar as these attacks are game-changers. It's now clear that Europe has become a true geopolitical hotspot, as it faces pressures from within and without.

Here's a look at which countries in Europe just might come to a boil — and why:

The most obvious source of direct pressure on Europe comes from the influx of Muslim migrants into countries with histories of Islamist violence and xenophobic response. This is certainly true with France but also in smaller countries like the Netherlands.

The most notable example of an anti-Muslim backlash in the Netherlands came in the response to the 2004 killing of Dutch filmmaker and television host Theo Van Gogh by a Dutch-born Moroccan militant. Following Van Gogh's murder, Dutch Party for Freedom leader Geert Wilders stepped into the fray. In 2014, he called for "fewer Moroccans" in the Netherlands, comments that landed him in court on hatred incitement charges.

Over the past decade, nearly 40% of the country's 475 mosques have been vandalized, and Wilders is more popular than ever. His anti-immigrant party now polls above 20%, giving these views growing influence at a time when anxiety over the influx of refugees roils the entire continent. The events in Paris will probably push his popularity higher.

But the Netherlands also reminds us that the Middle East is not the only source of risk pressing on Europe. When Malaysian Airlines Flight 17 was shot down over Ukraine in 2014, 298 people were killed, about two-thirds of whom were Dutch. For a country of 16.9 million people, the souls lost on that flight represented a greater share of the country's population than Americans lost on 9/11. The attack on that plane almost certainly came from Russian-backed Ukrainian separatists using Russian-made weapons. An increasingly insecure Russia will continue to create problems at Europe's margins.

Why might Russia become more insecure? When Vladimir Putin was first appointed prime minister in 1999, 37% of Russians hadn't even heard of him. Following a series of mysterious apartment bombings that killed nearly 300 people, his aggressive response in Chechnya drove his approval rating to 84% and propelled him into the presidency. When Chechen terrorists took more than 900 people hostage in a Moscow theater in October 2002, Putin's popularity jumped to 85% despite the 130 casualties. Again, Putin responded with force inside Chechnya.

Russia's president learned early on that attacks against Russia, if handled properly, could strengthen his hold on power. Or at least they can if Putin can point the finger at Chechens.

Turn now to another doomed aircraft. The recent downing of Russia Metrojet Flight 9268 — which claimed 224 lives — raises entirely new questions. Airstrikes in Syria mark Russia's first military engagement outside the former USSR since the end of the Cold War. The apparent attack on Metrojet by ISIS affiliates in the Sinai Peninsula is the first major terrorist attack carried out against Russia by militants from beyond former Soviet territory. If Russia faces further attacks — like the ones in Paris — Putin may find himself forced to take on new risks, particularly as low oil prices further weaken his oil-dependent economy. An increasingly insecure Russia that becomes even more unpredictable — in Syria, Ukraine and maybe elsewhere — is not good news for Europe.

For more than 30 years, Kurdish separatists have waged a war of independence against Ankara, Turkey's capital; more than 40,000 people have been killed to date. Although President Recep Tayyip Erdogan has been in power nearly as long as Putin, he hadn't previously shown the same talent for turning domestic disasters into personal popularity.

That changed with the Oct. 10 peace rally bombings that killed 102 people in the run-up to Turkey's October elections. It's still not clear who was responsible for that attack, but that matters little to Erdogan. "It's me or chaos," he warned, and the Turkish people responded by restoring his AK Party's absolute majority, which it had lost earlier this year.

But it was an earlier attack that drew Turkey into a more active role in Syria's civil war. A suicide attack in the border town of Suruç in July killed 32 people. Erdogan blamed the attack on ISIS and began a military campaign across the border.

Yet Erdogan's goals in Syria are far from clear. In fact, it looks like Turkey has simply injected its domestic battles into a conflict that is already spinning out of control. Turkey is believed to have launched roughly 100 times more strikes against Kurdish separatists than against ISIS fighters in Syria, which will not help to stabilize a country pushing huge numbers of refugees toward Europe.

On Aug. 10, an Eritrean asylum seeker stabbed and killed a Swedish mother and son who were shopping at an Ikea store in Västerås. Reports indicate the attacker had just had his asylum request denied by Swedish authorities, causing him to snap.

For years, Sweden was one of Europe's most welcoming destinations for refugees. It accepted 81,000 asylum seekers in 2014 and had already taken in 75,000 more in the first half of 2015. It's estimated that almost 200,000 migrants will arrive in the country by year's end, the largest amount per capita of any European nation.

It's hard to keep things in perspective in the immediate wake of a tragedy like the one just seen in Paris, but Sweden's recent brush with terrorism, while much smaller in scale, may indeed be the most frightening of all. Sweden's experience makes clear that there's no need for an intricate terror plot to shake a country to its core. An immigrant who picks up a knife from the kitchenware section in a department store and starts slashing innocent bystanders can also quickly change a country's politics. This murder surely played a role in last week's decision to impose temporary border controls and limit the migrant flow into Sweden, announced by Stockholm just hours before the attacks in Paris.

And now France. Even before Friday night's attacks left at least 129 people dead and hundreds more injured, anti-immigrant parties had been using the flood of migrants into Europe to extend their influence across the continent.

But none posed a greater threat to the future of the EU than France's far-right Front National, a growing political force in a country long-considered to be a pillar of the EU. The party's leader, Marine Le Pen, has become a leading contender for president in 2017. And as is known, terror is a boon to extremist parties that promise safety and security as part of their platform. Even though these promises have little basis in reality, these assurances hold sway in a population shell-shocked by recent events. Regional elections in France will be held in three weeks, which will provide a much better idea of which way the political winds are blowing.

In January, the attacks on Charlie Hebdo and a Jewish supermarket left 17 people dead and a population reeling. Some 4.7 million Muslims call France home, which is roughly 7.5% of the country's population. But if you were to ask the average French person what percentage of French society is Muslim, research shows you're likely to hear a number closer to 30%. That's the type of outsized role Islamophobia plays in France. And with the Paris attacks, it's a safe bet that it's going to grow larger.

Terrorism in Europe is nothing new — just look at the London and Madrid bombings a decade ago. But those attacks didn't come at a time when financial crisis, risk of a Eurozone breakup, separatist threats, pressure from Russia and a migrant crisis have already damaged Europe's cohesion. Add up all these risks, and Europe faces a longer list of security threats than at any time since the end of World War II. Paris is just further proof.