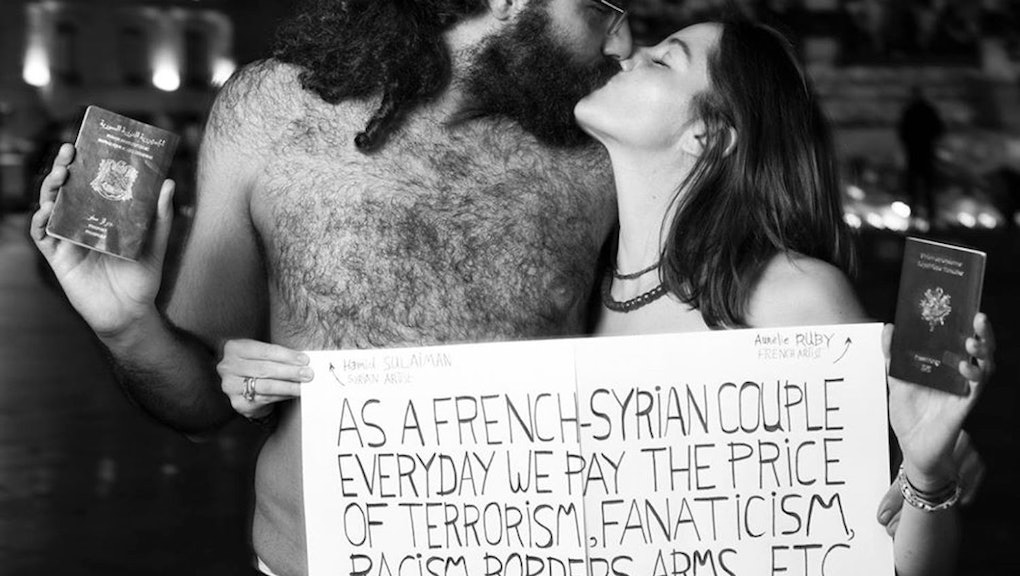 PARIS — After the Islamic State's coordinated attacks in Paris on Friday evening, the city was gripped by nervousness. And, as par for the course, Islamophobia intensified in the wake of exported violence by Islamic extremists.

But one French-Syrian couple's message of love and tolerance challenged that sentiment. Hamid Sulaiman and Aurélie Ruby posed topless in the bustling Place de la République, kissing and holding a sign, which tells those who are intolerant to "fuck off" because "love always wins."

On Sunday, they posted the photo on Facebook and it went viral. In four days, at the time of this article's publication, it amassed 4,401 likes and 4,644 shares.

The photo also inspired responses and imitations from other mixed-race couples. On Tuesday night, another couple posted a similar picture, with a comparable message.

"We are on earth as human[s] to love," Ruby told Mic, defiantly. "Not for anything else. We all deserve to go to a concert without being killed."

The couple met not long after Sulaiman fled his native Syria in 2012 and arrived in France. Both artists, they met at a theatre in Paris and have been near-inseparable since.

Ruby described a moving moment, in which the couple was jolted out of their shared intimacy and reminded of the stark differences in the worlds they came from.

They were fantasizing over what their future child might look like and decided to Google both French and Syrian babies. She started with French babies and a series of delectable, cherub-esque, tiny humans popped up. Just as she started to type in "Syrian babies," Sulaiman grabbed the computer and fervently told her not to. He didn't want her to see the seemingly endless series of dead and injured Syrian children, he explained, who suffered similar fates to that of Aylan Kurdi's.

Sulaiman and Ruby invited Mic into their home to discuss their experience living as a French-Syrian couple in France and the photo that helped them spread their message: Only love can fight hate.