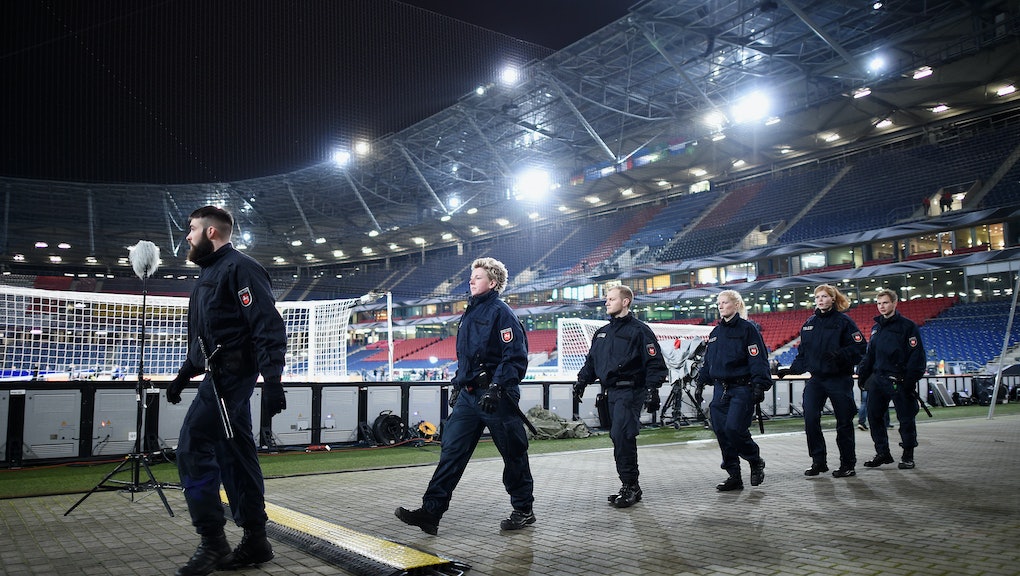 Authorities have evacuated HDI Arena in Hannover, Germany, where a game between the German and Netherlands soccer teams was scheduled to take place on Tuesday night, just days after a devastating series of bombings and a gun massacre killed 129 in Paris on Nov. 13.

Deutsche Welle reports the local chief of police says law enforcement had learned of a "device intended to be detonated inside the stadium."

The match has officially been canceled.

However, German Federal Minister of the Interior Thomas de Maizière has since confirmed in a press conference no explosives were found at the event, while the Guardian reports Lower Saxony interior minister Boris Pistorius said he had no indication reports of an ambulance loaded with a bomb in local paper Kreiszeitung were true.

Photos showed police and other security personnel screening the stadium, as well as evacuating sports fans and securing various areas of the facility. Authorities had already provided the arena with enhanced security following the Nov. 13 terrorist attacks in Paris which killed 129 people and wounded over 350 others. The Islamic State group has since taken responsibility for that attack.

According to the Associated Press, German Chancellor Angela Merkel and other high-ranking government officials were planning on attending the match to demonstrate they are not intimidated by terrorism.

The arena had reportedly been planning on displaying a gigantic Eiffel Tower and French and German flags arranged in the stadium's seating as an expression of solidarity with the victims in Paris.