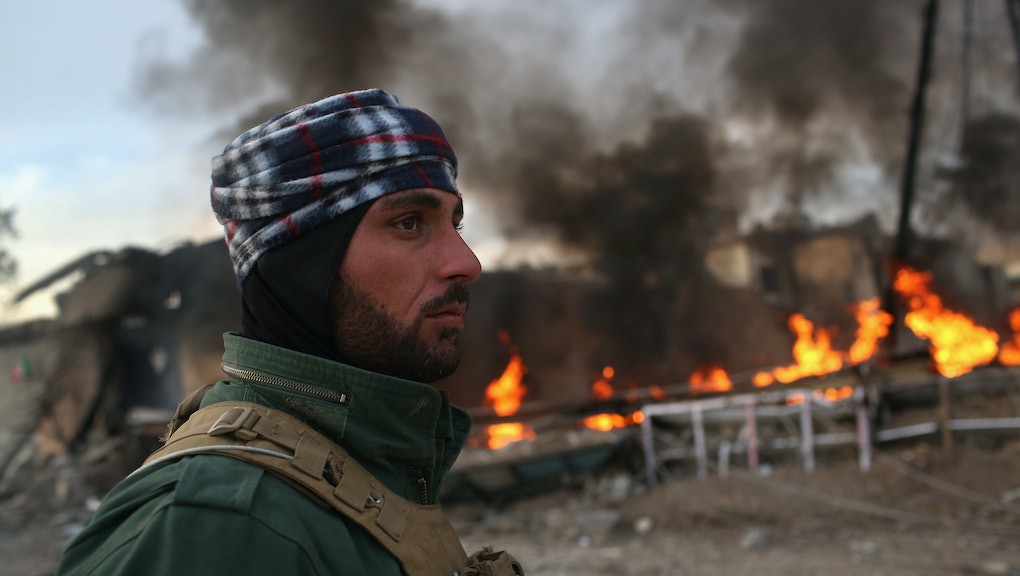 What Would It Actually Take to "Destroy" ISIS?

War is on America's mind again.

Following the terrorist attacks in Paris, prominent members of the political class and the press have raised the prospect of another major military intervention in the Middle East to combat the Islamic State group, also known as ISIS, which was responsible for the attacks.

Presidential candidates on both sides of the aisle have pledged to "destroy" ISIS, echoing President Barack Obama's characterization of his administration's strategy. On the Republican side, former Florida Gov. Jeb Bush has called for "overwhelming force" to take out the group, while Florida Sen. Marco Rubio has said ISIS would suffer "humiliating defeats" under his guidance. Democrats are similarly committed to the group's destruction — Hillary Clinton delivered a lengthy speech on the subject, saying last week that the campaign against ISIS should be intensified, and Sen. Bernie Sanders (I-Vt.) has called for the group's destruction, while emphasizing the importance of assembling a coalition of international partners to fight the group.

Pledging to eradicate ISIS is the safest thing an American politician can do today. But most candidates have been deliberately vague in their proposals, leaving the door open to any number of possibilities in the future.

So what would destroying ISIS actually mean, and how could it realistically be accomplished?

Mic spoke to several prominent national security and counterterrorism experts in an attempt to answer those very questions. Their prescriptions for how to defeat ISIS varied, but they were unanimous in their pessimism: Most expect to see an increase in the number of Paris-style attacks in the West, and many said that increased military intervention in Iraq and Syria could end up making the region even more unstable.

What the U.S. is already doing: The U.S. and its coalition partners have waged an aggressive air campaign in Iraq and Syria. Since the campaign commenced in 2014, allied bombers have conducted over 8,000 airstrikes, according to the Department of Defense, killing an estimated 20,000 ISIS fighters.

While the air campaign has managed to degrade ISIS' capabilities, it has not come close to destroying it. ISIS still controls a broad swath of territory across Iraq and Syria, operating a de facto state complete with an organized military, government services, a judicial system and other modern bureaucratic institutions.

"On the ground in Iraq and Syria, ISIS is at least as effective, not only militarily, but in terms of governance, as the state of Iraq or the state of Syria," David Kilcullen, former chief strategist in the State Department's counterterrorism bureau and one of the chief architects of Petraeus' "surge" strategy in Iraq in 2007 and 2008, told Mic.

The effectiveness of the American-led air campaign is currently limited by a lack of ground assistance. Without forces on the ground (whether American or local allies, which are few and far between), the U.S.-led coalition is unable to capture and hold territory following airstrikes. The strikes themselves are also far less effective: Ground forces are crucial for identifying targets and directing precise strikes that minimize civilian casualties. Executing an air campaign without that level of precision resulted in the death of more than 450 civilians in the first year of strikes — deaths which ISIS used to fuel recruitment of new members.

Defeating ISIS militarily would "probably mean more ground troops — which is something the West isn't particularly excited about, and given their experience in Iraq, I completely understand why," Victor Asal, co-director of the Project on Violent Conflict at the State University of New York at Albany, told Mic.

Asal said a campaign to truly destroy ISIS would require wresting control of ISIS-held territory, capturing the major cities under its control, while targeting its infrastructure and sources of funding. Territorial losses wouldn't eliminate the group, but it would deliver a considerable blow to its reputation and capacities.

"I'd say a realistic definition of 'military victory' against ISIS would be when the group no longer controls Mosul [the biggest ISIS-controlled city in Iraq] and Raqqa [ISIS' capital, in Syria]," Patrick Skinner, director of special projects at the Soufan Group and a former CIA case officer, told Mic. "That would demolish the claim of a 'caliphate' and be an actual military success. Removing the group from Iraq and Syria will likely be impossible, but forcing them to crumble from a pseudo-state back down to a traditional terrorist group would be a serious accomplishment."

It's not just Iraq and Syria: Even if the international community was successful in vanquishing ISIS in Syria and Iraq, the group would remain active in what it claims as its foreign provinces. Kilcullen believes at least 11 ISIS-linked groups now exist across Africa, the Middle East and Central Asia, including Libya, Nigeria, Afghanistan and Tunisia. These provinces are, in a sense, colonies of ISIS' main state, and members perceive themselves as politically and legally connected to the caliphate proper. But they have distinct local roots — for example, the lethal Nigerian terrorist group Boko Haram now considers itself part of ISIS.

Defeating these external chapters of ISIS would require massive international cooperation and investment. The U.S. and its allies would have to aid local counterterrorism operations in several countries in — most of which are highly dysfunctional or corrupt.

Beyond dealing with ISIS provinces, defeating the group would also require grappling with what Kilcullen characterizes as "the cloud of individual supporters and sympathizers who are doing self-generated attacks," who compromise a kind of ISIS Internationale. In some ways, managing the emerging threat presented by these self-organized groups, which can pop up spontaneously anywhere in the West, could be the trickiest element of the whole effort against ISIS.

When it comes to attacking targets in the West, ISIS is incredibly versatile. The decentralized group is adept at producing propaganda, often delivered through social media, designed to empower sympathizers to carry out attacks on their own accord, without establishing a deep relationship with ISIS in Syria and Iraq. ISIS provides the tools and the training, and leaves the rest to the attackers.

"[They] just issue general directives publicly on Twitter, and local guys, self-organizing, carry out those attacks," Kilcullen said. "They have access to targeting lists, techniques and doctrine online. It's all available."

The ISIS model of nimble and autonomous strikes means that Western countries are going to have to focus as much on rebounding from attacks as they do on preventing them in the first place.

That emerging reality has led some officials in the West to push for measures that would restrict civil liberties in the name of security. But most experts say the exact opposite needs to be done, and warn that marginalizing Muslims through exploitative legal regimes, xenophobic rhetoric or systematic alienation will only endanger the West further in the long run.

"The best way to ensure that counterterrorism efforts do not backfire is to not trample on fundamental rights," Letta Tayler, senior counterterrorism researcher at Human Rights Watch, told Mic. "It's critical that the U.S., France, Russia, Iran and other countries countering ISIS do not indiscriminately bomb civilian areas, or arbitrarily detain Muslims, or turn away desperate, law-abiding refugees simply because they are Syrian, or resort to the abhorrent tactics of torture and indefinite detention without charge that the Bush administration championed."

No good options: Even if all these objectives could somehow be achieved — and that is a colossal "if" — the underlying political dynamics shaping the Middle East that led to the rise of ISIS would very likely remain or worsen.

"It was chaos, conflict and sectarian tension that helped fuel ISIS in the first place," Skinner, the former CIA officer, said. "Even if the war in Syria came to some resolution and Iraq pushed ISIS out of Ramadi and Mosul, the conditions that gave rise to ISIS would still be in abundance."

Just as the toppling of Saddam Hussein laid the groundwork for the eventual rise of ISIS, defeating the Islamic State could leave similarly fertile ground from which new extremist groups could emerge.

"Avoiding the complete collapse of the Syrian state, if and when both Assad and ISIS are removed from power, will require enormous sums of money and commitment that defy imagination," Skinner said. "Fourteen years and trillions of dollars haven't produced a stable Afghanistan; rebuilding Syria will be even more difficult and challenging. There will have to be a near-term capability and will from the international community to ensure that Syria doesn't further implode once both the war against Assad and the war against ISIS are resolved at an acceptable level."

It seems only sensible to do what can be done to stop the menace that is ISIS. But history says things can always get worse.