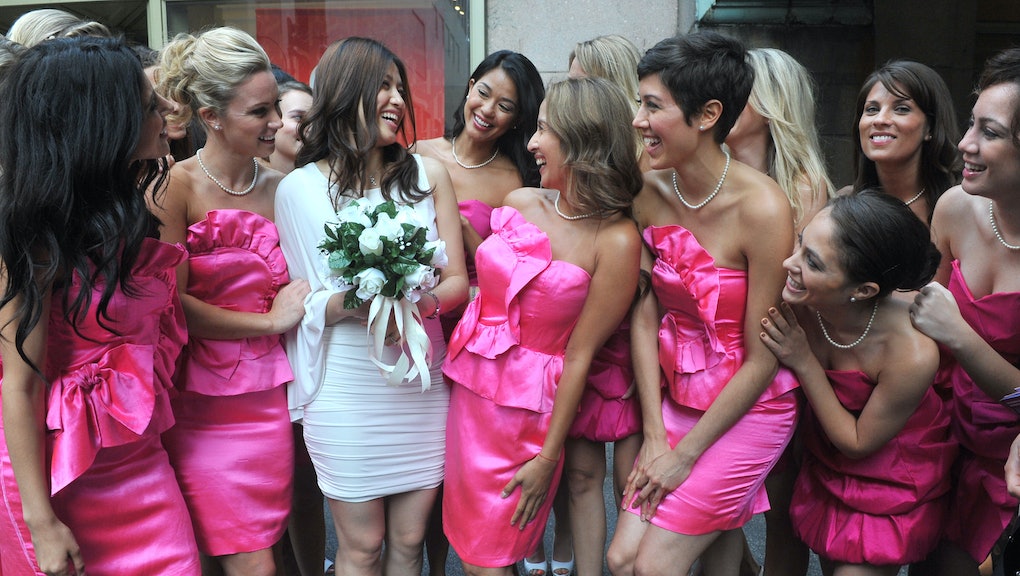 Being a Bridesmaid Is the Absolute Worst, Especially If You're From These States

It's an eternal question many brides face: Exactly how many bridesmaids are you supposed to have? Are you supposed to keep it small and let only your closest family members and college BFFs walk with you, or are you planning on asking your whole sorority to do a choreographed dance to the Backstreet Boys down the aisle?

Thanks to a new infographic from the Weddington Way, a wedding brand geared toward millennial brides, we finally have the answer. The website released a map of the states with the most and least bridesmaids per wedding party, and as it turns out, there's a surprising amount of variation in the size of bridal parties across the United States.

Note: If you are an American woman, and it is not your dream to pose for group photos while wearing the same hideous puce dress as half a dozen other women, you should probably try to avoid making friends in Charleston, South Carolina.

According to the map, Southern locales take the lead in how many bridesmaids are recruited for the average wedding. The average bridal party size for the entire U.S. is 4.39; but in places like Louisiana or South Carolina, it's more like five.

If you live in, say, New Mexico or New Hampshire, your engaged friend is a lot less likely to have more than three bridesmaids, which is awesome news if you're fretting about breaking the bank on that sweetheart neckline gown in a specific shade of apricot.

In terms of cities with the largest bridal parties, six of the top ten were metropolises in the South (or seven, depending on how you want to classify Baltimore). Overall, the city with the biggest average bridal party was Charleston, South Carolina, a.k.a. the "Bridesmaid Capital of the United States."

Unsurprisingly, when it came to "mega" bridal parties — weddings with seven bridesmaids or more — the cities with the highest percentage of "mega" parties included Birmingham, Alabama, Waco, Texas, and New Orleans.

The distributions reflect the myriad cultural differences across the country, such as the number of multigenerational households, which tend to be more common in Southern states. While there's no single explanation for the trend, age could be a good indicator.

According to 2014 Pew data, the median age of Southern brides' first marriage tends to be a bit lower than their counterparts in places like the Northeast. This could actually have implications for brides' friendships: As we get older, making new friends and maintaining relationships gets more difficult. In other words, you might have more prospective bridesmaids in your life in your early 20s than you will if you get married later, once you've become busier and more disillusioned.

Regardless of the reason a bride might feel compelled to ask 11 of her closest friends to precede her down the aisle, Weddington Way makes a very valid point: "There is of course no "normal" number of bridesmaids for a wedding."

So include whomever you want to include in the party. Just for the love of God, please don't make your bridesmaids wear puce. That shit doesn't look good on anyone.