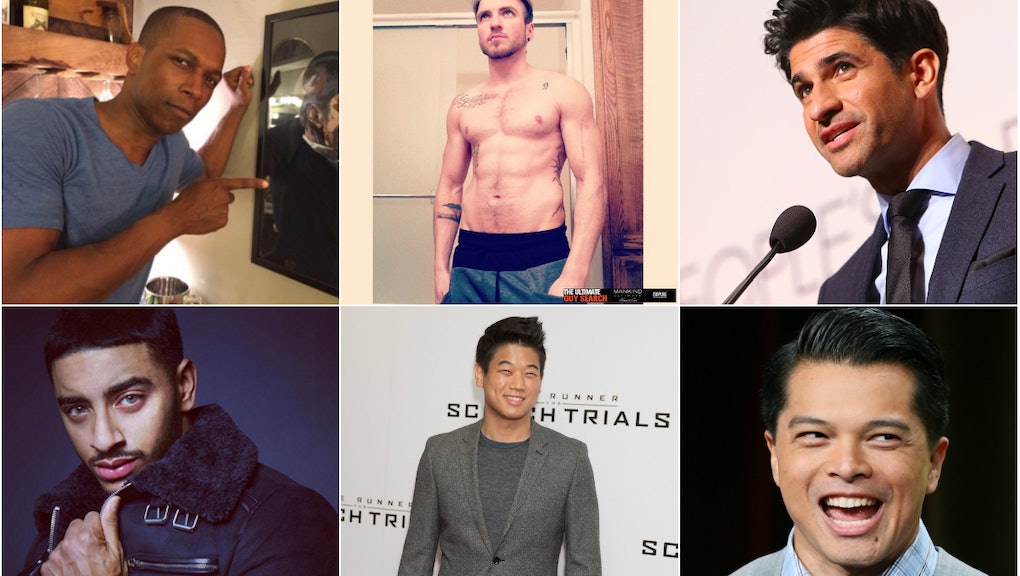 There's no denying that Beckham is sexy AF. He fills out undies nicely. He is a pioneer of cool soccer player hair. If his 40 tattoos were made out of a food-coloring-and-cream-cheese-frosting blend, we wouldn't hesitate to lick all 40 of them off slowly, savoring every bit of artificial sweetener mixed with man-sweat.

But Beckham is kind of a vanilla, predictable choice for People magazine, particularly when you consider that he, like the dozens of other men who have been honored with the title, is white. In the 30 years that People has published a Sexiest Man Alive issue, a person of color has only won once. (That would be Denzel Washington, who graced the issue's cover in 1996.) The magazine also has yet to put an openly gay, trans or (*gasp*) average-bodied dude on the cover of the issue.

To be fair, the magazine often has more diversity elsewhere in the rankings. For instance, this year we have future Bond hunk Idris Elba coming in fourth and gay Empire stud Jussie Smollett eighth. That said, we have our own list of sexy men to prove that objectifying hot dudes shouldn't be limited to one size, color or identity.

In no particular order, here's Mic's idea of what the Sexiest Men Alive issue should actually look like in 2015:

The Filipino-American actor makes CW viewers want to kiss the shit out of his adorable face every week on Crazy Ex-Girlfriend.

This Broadway star has been having a great year thanks to his role in the musical Hamilton, in which audience members get to learn about the life of Alexander Hamilton while also witnessing Odom Jr.'s piercing hotness IRL. It's a win-win!

Don't you just want to cuddle with him, like, immediately? Also: He's funny, and funny is hot.

The transgender model/bodybuilder/heartthrob came this close to winning Men's Health's "Ultimate Guy" competition earlier this year. Peruse his Instagram at your own risk, as it is wont to induce more thirst than a salty pretzel.

Maze Runner hottie Lee currently co-stars in the Unbreakable Kimmy Schmidt on Netflix, allowing viewers to binge-watch his lovable brand of hotness at their leisure. (Note: Lee almost had a shot at topping People's list last year, but he wound up in fourth behind Jamie Dornan, Chris Pratt and 2014 winner Chris Hemsworth.)

Male body positivity champion Zach Miko is Target's only plus-size male model, and we like his beard. In October, he told Mic, "I don't give a shit if I ever have ripped abs and look like an Abercrombie and Fitch model. I never want that," displaying a DGAF attitude about unrealistic body standards that makes us want to just get naked right now, frankly. BRB.

Jaffrey is often referred to as "Homeland Hottie" because he stars in Homeland and he's a hottie. Both of these statements are accurate.

If you're capable of watching his dorky dance moves in the "Hotline Bling" video without wanting to jump through the screen and tear that dad sweater right off his body, then congratulations on being stronger than the rest of us. Also, Drake has feelings, which is cute!

"YAASS DADDY" is what many viewers may find themselves screaming at the television every week if they happen to be regular viewers of Camil's fatherly role in the CW's Jane the Virgin.

This hunky transgender model starred in a Barneys campaign last year and has no less than 42,000 thirsty Insta followers. He also happens to rock a pair of Calvin Klein undies just as well as (if not better than) former CK model David Beckham.

Everyone's favorite Mean Girls actor grew up to be a hot lil' sex symbol for the bear community. This is particularly true of his role on HBO's short-lived series Looking, in which he played an HIV-positive character who doesn't shy away from his sexuality.