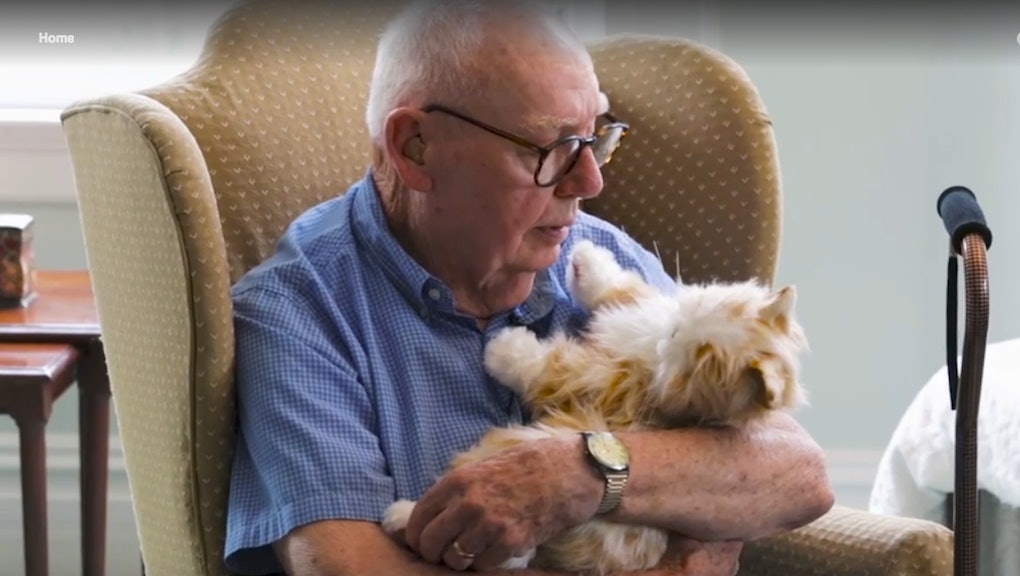 Hasbro Introduces Toys for the Elderly, Starting With a Robotic Cat

You know that nightmare scenario in which elderly pet owners are eaten alive by their own animals? You can now successfully avoid it, thanks to a new line of robotic toys by Hasbro.

The toy manufacturer, which typically reserves its wares for kids, launched Joy for All, a line of toys designed for the elderly. The first model on the market is called the Companion Pet Cat, and it purrs, meows and uses sensors to respond "with familiar, cat-like actions," according to the company's website.

"While it's not a replacement for a pet, the Joy for All Companion Pet Cat is a life-like alternative that can provide the joy and companionship of owning a real pet, without the often cumbersome responsibilities," Ted Fischer, Hasbro's vice president of business development, told Toy News.

The idea for the line came from consumer feedback, which reflected a desire for toys marketed at seniors. "We heard from seniors across the country that companionship was important to their happiness," Fischer said. "Many live alone, miss having a pet, or are no longer able to care for a pet."

Gizmodo reports that the robotic cat does many of the same things a living, breathing cat does, including moving its head toward your hand when petted and rolling over for a belly rub. It also has "new vibration technology" that has improved the sound and feel of the cat's purring.

While the idea may sound a little bit off at first — more fodder for crazy cat ladies and dudes! — it's not really any different, as Gizmodo notes, from the Tamagotchis of our youth.

The elderly and companionship: Studies have shown seniors respond positively to companionship of all kinds — even plants.

One well-known study conducted by psychologist Ellen Langer in the 1970s demonstrated that elderly nursing home residents who cared for plants received more emotional benefits from doing so as opposed to those whose plants were taken care of by nursing home staff, partially because it was "responsibility-induced" behavior.

Robots versus humans: Of course, a robotic cat isn't the same as a real cat, so it's unlikely that Hasbro's new line will have quite the same effect. Plus, there's a downside of attempting to bond with a robot companion instead of a human one.

Sherry Turkle, an MIT professor who focuses on human-technology interaction, has been a fierce critic of this sort of behavior, arguing during a 2012 TED Talk that "technology appeals to us most where we are most vulnerable." Robots don't understand death and cannot empathize, Turkle says.

"During my research I worked in nursing homes, and I brought in these sociable robots that were designed to give the elderly the feeling that they were understood. And one day I came in and a woman who had lost a child was talking to a robot in the shape of a baby seal ... It comforted her. And many people found this amazing.

Still, despite Turkle's warnings, for seniors who can't care for animals — or, hell, for those of us who just want something to snuggle with — Hasbro's robotic cat might just be the next best thing. You don't have to clean up its vomit, after all.