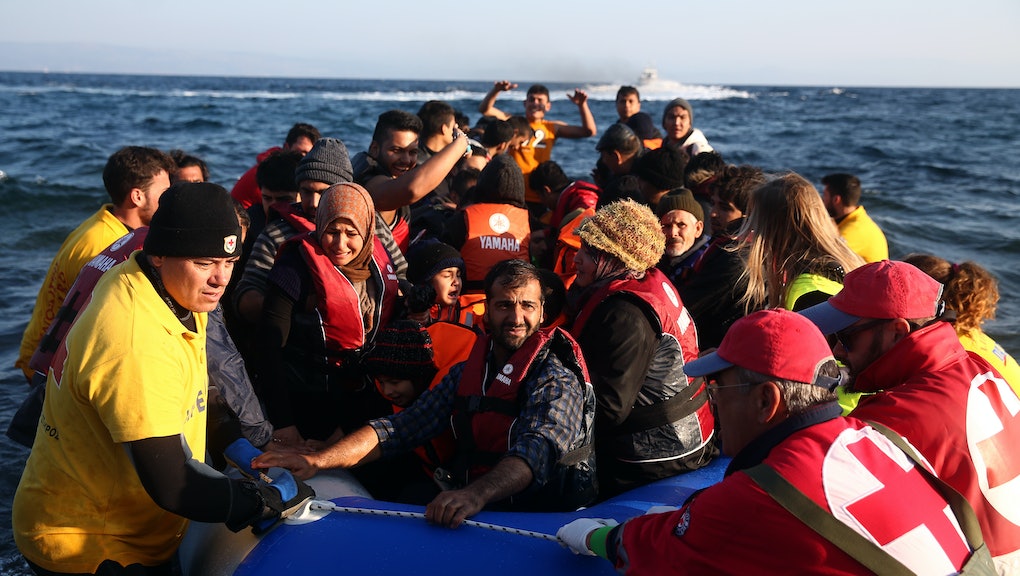 The US Shouldn’t Turn Its Back on Refugees. I Should Know — I Was One.

On Oct. 24, 1991, my family and I got off a plane at John F. Kennedy International Airport in New York and were greeted by men with assault rifles.

I was almost 5 years old, and soaring from the excitement of my first plane ride. I hadn't slept a wink, despite the 10-hour flight from Moscow to New York. Seeing men in military uniforms with guns up close and personal was the coolest thing I could have imagined.

For the adults on the flight, it was a tense moment. To them, the sight of uniformed soldiers was far less comforting, and they didn't know whether the Americans would be any different than the government and soldiers they had just risked everything to escape.

They also knew they had nothing left to lose.

My family and I were Jewish refugees from Russia, fleeing the persecution and oppression of the Soviet regime. My parents had spent years and much of our life savings trying to secure passage to the United States, one of the few places willing to offer safe haven to Jews fleeing the Soviet Union.

Of course, those men with rifles were not our executioners, but our escorts. They made sure we found the appropriate immigration agents and made our connecting flights that would take us all over the country. My family and I continued on to Olympia, Washington, where we were welcomed by the local community and established a new life and new beginning through the selfless help of countless Americans.

That astonishing reception enshrined in me an appreciation, respect and admiration for the American people and the country that so willingly and unquestioningly opened its arms to my family when we had nowhere else to go.

The American generosity and openness that my family and I found in the United States is the very reason that the hyperbole and fearmongering swirling around the acceptance of Syrian refugees today is so concerning.

The backlash to Paris: Since the terrorist attacks in Paris, more than 30 governors (all but one of whom is a Republican) have expressed opposition to letting Syrian refugees enter their states. Every GOP presidential candidate has declared some form of opposition to admitting refugees, ranging from calls for total deportation to administering religious tests for admission.

Presidential candidate Texas Sen. Ted Cruz, himself the son of Cuban refugees, said bringing Muslim refugees into the United States was "nothing short of lunacy" and committed to introducing legislation that would ban those people from coming in.

Former Florida Gov. Jeb Bush said only Syrian refugees who could prove they were Christian should be allowed in. "You can prove you're a Christian," Bush said Tuesday in South Carolina, according to the New York Times. "[If] you can't prove it, then, you know, you err on the side of caution."

Speaking at the G20 summit meeting in Turkey earlier this week, President Barack Obama called anti-refugee reactions in the wake of the Paris attacks "shameful."

"Slamming the door in their faces," Obama said, "would be a betrayal of our values."

Historical precedent: This isn't the first time in U.S. history that anti-refugee sentiment has swept over the country, driving decisions that can lead to tragic consequences. Jewish refugees seeking to escape Germany and resettle in this country at the dawn of World War II did not fare as well as my family did.

In 1939, legislation to admit an additional 20,000 Jewish refugee children seeking to escape Nazi Germany was allowed to die in committee. Much like today, public opinion was on the side of prohibition: According to a poll published in Fortune magazine in July 1938, 67.4% of Americans felt that "we should try to keep them out."

Later that year, a ship named the St. Louis departed Europe with 937 refugees on board, almost all of whom were Jews fleeing Nazi persecution. They arrived in Havana, where they hoped to apply for refugee status in the United States. All but 28 were denied entry to Cuba. The remaining passengers set sail for the United States and appealed to President Franklin D. Roosevelt for relief. Roosevelt, unwilling to fight a politically unpopular battle, denied their request, and the St. Louis was forced to turn back across the Atlantic. Over 40% of those refugees were estimated to have died in Europe, most in concentration camps.

During World War II, countless German Jews seeking asylum were turned away for fear that they were secretly Nazi spies. Many of those alleged spies and their families were subsequently murdered in places like Auschwitz, Dachau and Sobibór.

After World War II, Russia's storied history of Jewish pogroms and continued persecution caused thousands of Russian Jews to flee to wherever they could. The United States refused Soviet Jewish refugees until 1974, when thanks to the tireless advocacy of supporters in the U.S., Congress passed the Jackson-Vanik Amendment, allowing Soviet Jews to receive refugee status from the United States.

The danger of stigmatization: Focusing our hatred and fear on refugees is not only wrong-headed and un-American, it also plays directly into ISIS' goals. By demonizing all refugees, particularly Muslims, and viewing them as threats rather than displaced individuals seeking asylum, we marginalize entire populations and create a breeding ground for radicalization that fuels organizations like ISIS and al-Qaida.

Since Sept. 11, the United States has admitted over 750,000 refugees. None of them have ever been arrested on domestic terror charges. According to EU officials, every Paris attacker identified by authorities so far has been a European citizen. None of them were refugees. Tellingly, just days after the Paris attacks, French President Francois Hollande said France would accept 30,000 more refugees over the next two years.

A better way forward: Paranoia should not and cannot trump common sense and compassion.

The America that welcomed my family and me on Oct. 24, 1991, was proud of its leadership role as a beacon for freedom. That is the America that I grew up in and proudly became a citizen of. I was the beneficiary of a country that learned its lessons, that understood how power grows from commitment to principles of openness and not the expedience of resorting to fear.

Once again, there are frightened, persecuted people fleeing their homeland in the absence of hope. We have choices to make. The story of American exceptionalism is sustained in moments like these. And that exceptionalism is passed down through stories told around the kitchen tables and holiday gatherings of families like mine, who found a better life here in the face of hopelessness because Americans held true to their values. Let us not falter now.