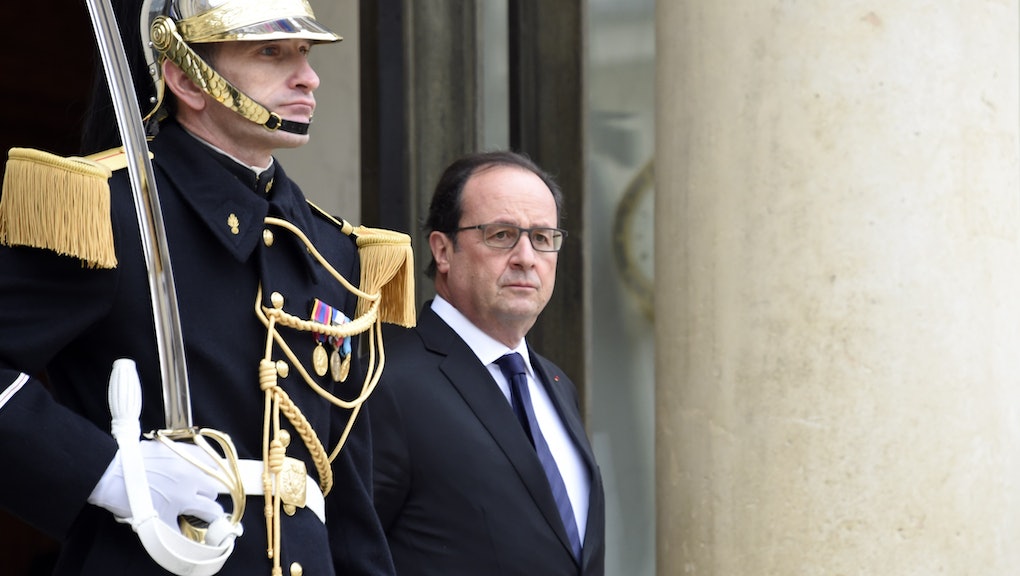 French President François Hollande announced on Wednesday that the French government would honor its previously agreed-upon commitment to accept 30,000 refugees over the next two years, regardless of Islamic State group-linked terrorist attacks in Paris on Nov. 13 which killed at least 129 people and wounded more than 350.

"Life should resume fully," Hollande told a gathering of French mayors, reports ABC News. "What would France be without its museums, without its terraces, its concerts, its sports competitions?"

"France should remain as it is," he continued, discussing the need to not let ISIS successfully disrupt French policy. "Our duty is to carry on our lives ... 30,000 refugees will be welcomed over the next two years. Our country has the duty to respect this commitment."

According to ABC News, Hollande said while "some people say the tragic events of the last few days have sown doubts in their minds," and he understood the urgent need for adequate security, France has a "humanitarian duty" to "reinforce our borders while remaining true to our values."

The BBC reports 750,000 migrants (including those who may be granted refugee status) had arrived in Europe by sea as of early November, with hundreds of thousands more expected to arrive in the coming year.

Hollande's commitment to allow entry to the previously allotted number of refugees stands in stark contrast to the reaction from 27 mostly Republican governors in the United States who said they would deny Syrian refugees entry to their states. Of the nine suspects fingered by authorities as the perpetrators of the Paris attacks, one was in the possession of a Syrian passport — that many believe to be fake — used to gain entry to France through Greece and Serbia.

The governors likely cannot legally deny refugees entry since the refugees would be admitted under a federal program. Nonetheless, the message was clear — Muslim refugees are officially not welcome in those states.

Hollande's affirmation that his administration will not be intimidated into changing refugee policy also steered very clear of the xenophobic rhetoric that often emerges from high-profile terrorist attacks.

As Mic's Jake Horowitz writes, Republican presidential candidates responded to the news in Paris with varying levels of hostility and suspicion towards Muslims. Former Florida Gov. Jeb Bush said the U.S. should only aid beleaguered Christians, Texas Sen. Ted Cruz argued it would be "lunacy" to permit Muslim refugees into the country and former Arkansas Gov. Mike Huckabee quipped Americans should "wake up and smell the falafel."

While there's still much criticism around France's treatment of refugees after their arrival, Hollande seems to grasp that inciting global panic, and contributing to the the disaffection of young Muslims, is exactly what ISIS hoped to achieve with the attacks.