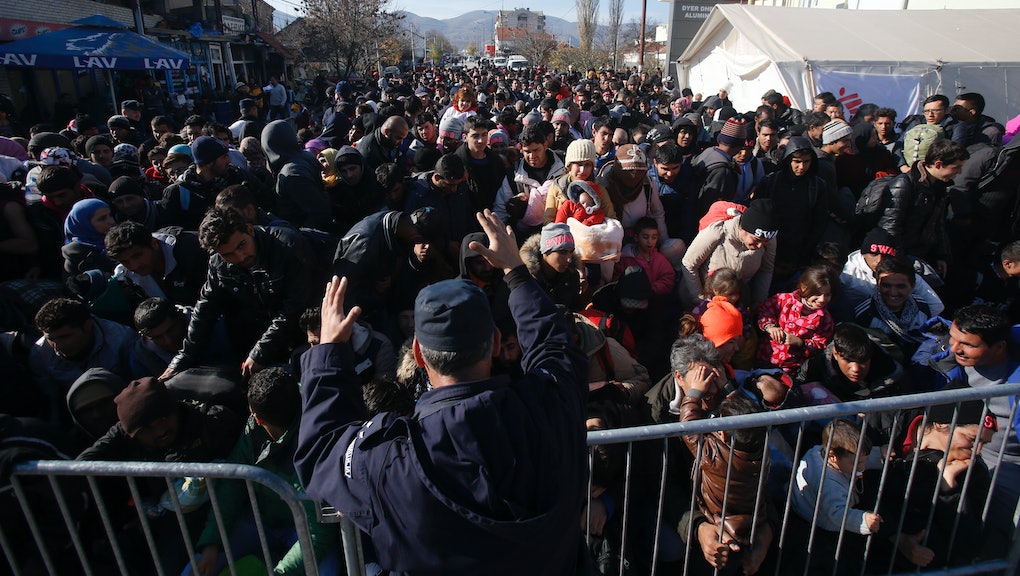 Since terrorist attacks in Paris on Friday that left at least 129 people dead and hundreds more injured, dozens of governors across the United States have come out against accepting refugees fleeing the Syrian conflict into their states.

"As your governor, I will not stand complicit to a policy that places the citizens of Alabama in harm's way," Gov. Robert Bentley said in a press release. "Neither [President Barack Obama] nor any federal official can guarantee that Syrian refugees will not be part of any terroristic activity," echoed his Texas counterpart, Gov. Greg Abbott. "Our first priority is protecting the safety of our residents," said Michigan Gov. Rick Snyder when explaining the reversal of his previous support for resettlement.

Governors, presidential candidates and others pointed to the federal government's vetting process, denouncing it as insufficient to protect Americans from potential infiltrators supporting the Islamic State group, also known as ISIS. "I don't trust this administration to effectively vet the people that they're asking us to take in," New Jersey governor and presidential candidate Chris Christie told radio host Hugh Hewitt.

The claim was not entirely specious — the sentiment was also echoed by FBI chief James Comey. "There is risk associated with bringing anybody in from the outside, but especially from a conflict zone like that," he recently told the Senate Homeland Security Committee. "My concern there is that there are certain gaps I don't want to talk about publicly in the data available to us."

While the risk of accidentally importing ISIS terrorists is far from zero, the U.S. is at considerable advantage to counterparts in Europe for a number of reasons. Despite the gaps, the U.S. vetting and resettlement process is a complex and deliberative one, involving multiple agencies. Refugees who begin the process of resettlement can expect to spend years winding their way through the system.

Over the past two years, the U.S. has accepted only about 1,800 Syrian refugees. In contrast to European countries currently facing unchecked inundation, the U.S. — an ocean away from the crisis epicenter — can require asylum seekers to submit to a more cumbersome process. The average time spent for a refugee navigating the U.S. asylum system is between 18 and 24 months, according to NPR.

The average time spent for a refugee navigating the U.S. asylum system is between 18 and 24 months.

During that period, the vetting process includes an analysis by multiple federal agencies and cabinet level departments including the Departments of Defense, State and Homeland Security, as well as the FBI Terrorist Screening Center and the National Counterterrorism Center, according to CNN. After that, resettlement is handled by the State Department, which works with the Department of Health and Human Services' Office of Refugee Resettlement, which then passes the refugees off to private organizations like Catholic Charities and Lutheran Family Services.

On top of all this, Syrian refugees will go through an additional screening procedure known as the "Syria Enhanced Review" process. Comey's concerns notwithstanding, the program is robust, according to those in the know — partly because of the American experience in Iraq.

"With the Syrian program, we've benefited from our years of experience in vetting Iraqi refugee applicants," a senior Obama administration official told CNN. "And so the partnerships we have today and the security checks we have today really are more robust because of the experience that we've had since the beginning of large-scale Iraqi processing in 2007."

In any other circumstance, many anti-refugee Republicans would see the glacial pace of the asylum process as emblematic of the federal government's inability to operate efficiently. However, in this case, they're embracing the bureaucracy.

In the end, the governors who have pledged to stop refugees from entering their states will likely capitulate. Among the agencies and departments tasked with refugees management, none were part of any state governments. Experts and state department sources told Mic that refugees were traditionally the purview of the federal government.

"Governors do not decide whether refugees ultimately enter the United States," Washington's Democratic Gov. Jay Inslee, who is supporting U.S. refugee resettlement, told reporters on a conference call Tuesday. "These are decisions made by the federal government."