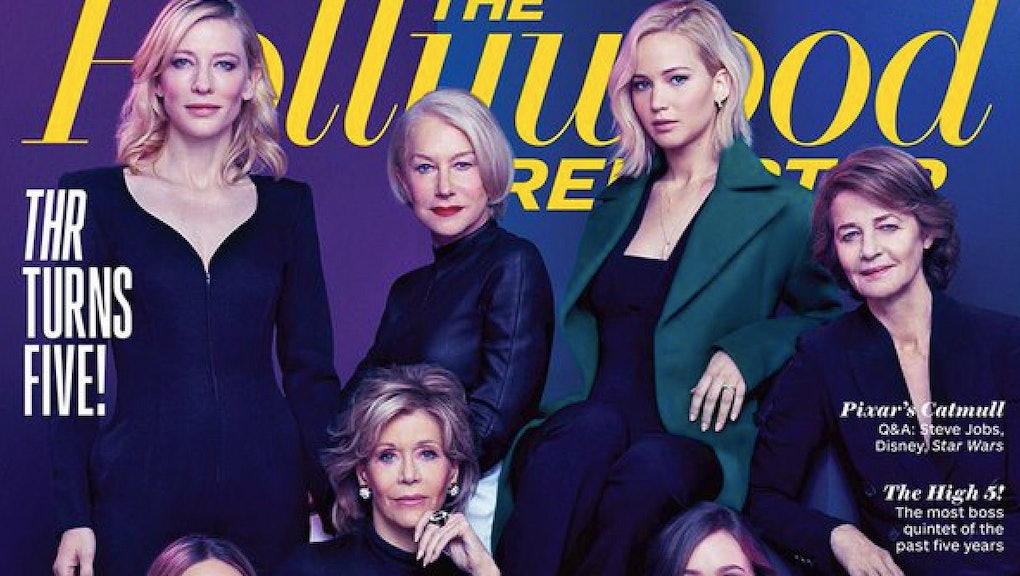 The Hollywood Reporter has an annual tradition during Oscar season: Collect a bunch of front-runners in each field and have a conversation. In the past, these have been rich talks about the industry and the different roles individuals play within it. The conversation in 2013 between the actress and supporting actress candidates was particularly rich — a debut of sorts for soon-to-be-Oscar-winner Lupita Nyong'o, winners Octavia Spencer, Emma Thompson and Julia Roberts and media goddess Oprah Winfrey herself.

This year's roundtable features a dialogue about, among other things, the gender pay gap in Hollywood. It's a conversation several of the participants have been active in this year, including Jennifer Lawrence (who called for transparency in talk about salaries) and Kate Winslet (who called talking about it "vulgar"). All eight participants — including Carey Mulligan, Brie Larson, Cate Blanchett, Charlotte Rampling and Jane Fonda — are white.

The monochrome color palette did not escape the notice of Twitter, to say the least.

In a special note titled "Why Every Actress on the Hollywood Reporter Roundtable Cover Is White," the Hollywood Reporter's executive editor, Stephen Galloway, explained that the choice was made to his own astonishment because there were no actresses of color in the conversation for Oscars. Indeed, in both the best actress and best supporting actress races, 2015 is looking more and more like a rehash of 2014, the whitest Oscars in almost two decades.

"Two years ago, I was thrilled that three of the six women on our roundtable were black," Galloway wrote, referring to the 2013 roundtable. "I thought, perhaps naively, that this represented a sea-change in the film business, and hoped it was catching up with the tectonic shifts that industries all across America have had to make to reflect this country's diversity. But I was wrong."

Galloway is correct that there are no nonwhite front-runners in either of the actress categories currently. That's unfortunate, because it keeps women of color out of a conversation that disproportionately affects them. In 2014, black women made 63 cents for every white man's dollar. Other women of color earn similarly low figures in comparison to their majority counterparts.

Considering the paucity of roles available for women and actors of color, this pay gap is extremely disheartening. The odds are financially and practically against them.

It's great to hear Blanchett calling out "lazy thinking across all industries" in the roundtable. "We're at the pointy and probably the most public end, but in what industry do women receive equal pay for equal work?" she asks. "I can't think of any." And it's great to hear Helen Mirren laud Lawrence for her op-ed. This conversation is important. As it stands in this piece, however, it's also exclusive.

There is no law that holds the Hollywood Reporter culpable to only include likely Oscar nominees. Amy Adams was included last year but missed a nomination for Big Eyes. The same happened to Hilary Swank, a non-nominee for The Homesman in the same year. In 2013, Spencer, Thompson and Winfrey all lacked nominations. There will be women among this year's crop who don't make the nomination list when it's released in January.

With something as important as the pay gap on the agenda, the roundtable would have benefitted from bending the rules to allow for more diverse voices. This is a good first step — but just a first step.