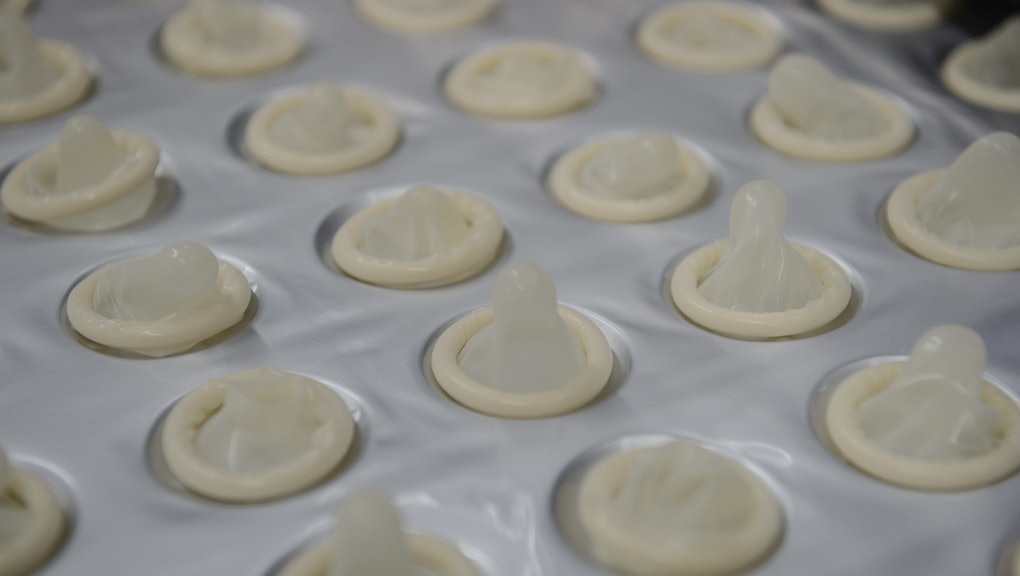 2 Years Later, Here's What Happened to Bill Gates' Condoms of the Future

At long last, it looked like the greasy sheaths of latex would meet their demise.

In March 2013, the Bill and Melinda Gates Foundation challenged the world to reinvent the condom — a device that's been around for centuries yet has seen minimal technological improvement in the past 50 years.

The goal: to create a "next-generation condom that significantly preserves or enhances pleasure, in order to improve uptake and regular use," according to the foundation's Global Grand Challenges website. The most promising designers would score $100,000 in seed funding, plus a chance at an additional $1 million to further finance their projects.

It was the answer many people had been waiting for. For folks with penises, and their partners, latex is limiting and unpleasant. It reduces sensation; smells, tastes and looks unappealing; is tough to apply; and can cause allergic reactions. Only a small fraction of the world's population regularly uses them, according to the New York Times.

The condoms of the future: In November 2013, and again the following June, the Gates Foundation announced a handful of winning grant recipients, all with exciting new ideas for the future of male and female condoms. One design incorporated a nifty applicator to help you get the condom on quickly and painlessly. Another would cling to your penis like Saran Wrap. Yet another would contain graphene, an ultra-strong material that could rule out breakage. Many people, long fed up with the limitations and unpleasantness of latex, rejoiced at the news.

And so began the waiting period to finally put those next-gen condoms into action.

Two and a half years later, we're still waiting. After the initial thrill of receiving the grant, some recipients learned that getting a new, non-latex condom through FDA trials and eventually to market is an arduous process. It requires many years and many millions of dollars — barriers so high, it's no wonder our drug store aisles are still dominated by the same prophylactics.

Grant recipient Mark McGlothlin, president of Apex Medical Technologies, seemed almost amused when Mic asked him for updates on his condom's production process. There were no updates, he said.

"It probably is more than a million dollars just to get through FDA approval. It's a brutal process."

Apex's grant-winning vision was dubbed the "Ultra-Sensitive Reconstituted Collagen Condom." Made from collagen found in bovine tendons, it was designed to replicate the feeling of your partner's actual skin. Described by McGlothlin as a new-and-improved take on traditional lambskin condoms, the design purportedly has no odor or taste. "We made a better version of what mother nature made," he said.

His company developed a successful prototype, McGlothlin said, but can't move forward with getting it to market unless someone funds it in a "very major sort of way" — more money than the Gates Foundation can provide, unfortunately, even if McGlothlin receives the additional $1 million in funding.

"It probably is more than a million dollars just to get through FDA approval," McGlothlin said. "It's a brutal process."

McGlothin assured Mic he is wholly grateful to the Gates Foundation. "But for all the publicity they got on the condom project," he said, $1 million "just won't get the product to market. That's the frustrating part." (The Gates Foundation could not respond to our request for comment in time.)

Condoms are not popular. Only around 5% of men worldwide are estimated to use them — despite their 98% effectiveness at preventing unwanted pregnancy and the spread of sexually transmitted diseases and HIV.

Among U.S. women ages 15 through 44, only 10% use condoms as a form of contraception, according to a recent CDC report. That's fewer than the number of women who prevent unwanted pregnancies via the pill (17%) and female sterilization (also 17%). And of all American adolescents who engaged in sexual intercourse in the past month, nearly 25% of guys and nearly 40% of women opted not to use a condom, according to the U.S. Department of Health and Human Services.

And yet the demand for pregnancy prevention is enormous: In 2006, the CDC estimates that 49% of U.S. pregnancies were unintended.

That's not to mention the rampant spread of HIV across the globe. 2014 saw approximately 2 million new cases of HIV worldwide, bringing the total number of people living with HIV/AIDS to 36.9 million by the end of 2014, according to the World Health Organization. Sub-Saharan Africa is home to the majority of people living with HIV — approximately 25.8 million in 2014.

You can see why there's a push — from the Gates Foundation, the hundreds of innovators who submitted condom proposals, and others — to create condoms that are easier and more pleasurable to use.

But it's not as simple as drawing up inspiring design plans.

Suppose you had a great prototype for a new, non-latex male condom. Before it could hit shelves, it would be required to meet this extensive set of FDA regulations, including widespread trials for slippage, breakage, leakage and viral penetration. McGlothlin went through the process before, more than 20 years ago, with a polyurethane condom. He said the process took three years and cost millions of (government-funded) dollars.

If a new condom is similar to products already approved by the FDA, the process can be sped up — somewhat — if the developers file a 510(k), which exempts the product from having to undergo premarket approval.

The applicant must show that their product conforms "to recognized consensus standards," FDA guidelines say. If they do, it'll eliminate the need to review test data for certain aspects of the device.

Unfortunately, designs that in no way resemble pre-existing condoms — such as those that don't include latex — might not qualify.

It's clear why the FDA holds radically new medical devices to high standards. When protecting people against unwanted pregnancies and potentially fatal viruses, there is no room for error. Many people, no doubt, would rather wait years for a new condom design to pass rigorous trials than put themselves at risk of pregnancy, STDs or HIV.

Ben Strutt, another Gates Foundation grant recipient, sees it differently. He pointed to the recent outbreak of Ebola, when, in the face of emergency, the FDA fast-tracked certain Ebola-fighting drugs they hadn't yet formally approved. "People said, 'What's worse — people dying, or us giving this a try?'" Strutt told Mic.

"Sometimes, there is a time and a place to push things forward more quickly," he continued. "There are very, very good reasons why we all need reassurance from the healthcare system, but at the back of our minds, we have to remember that people are dying every minute, every hour, every day, because those solutions aren't out there and in place."

Strutt, of England's Cambridge Design Partnership, is no longer pushing the condom design that won him a Gates Foundation grant. Dubbed the "Dynamic, Universal Fit, Low-Cost Condom," it was a one-size-fits all device that would shrink onto the wearer's penis during sex.

"What struck is that when you start talking about stuff like collagen in condoms, these things are a long way from markets," Strutt said. "We're not talking in the next two or three years, we're talking, in my view, eight, 10, 15 years out. Who knows. So what we wanted to do — what we still believe is possible — is making a difference in the near time."

He's pivoted his efforts toward researching behavioral patterns in Sub-Saharan Africa, where factors like religion, gender inequality and popular myths — among many other factors — hamper widespread condom use. Strutt is currently in the midst of patent applications and could not reveal many details, but he claims to have used his research to produce a more "holistic" solution to Sub-Saharan Africa's condom problem. He's also actively seeking partners to join him in the project.

"We're not seeing the physical condom in isolation," he said. "What we're seeing is from a user experience perspective."

Another strategy for getting an innovative condom idea to market? Find a powerful partner.

"Our approach to clinical trials and FDA approval is to collaborate with a manufacturer," grant recipient Richard Chartoff, a professor at the University of Oregon, told Mic via email. "We are negotiating with a major manufacturer who would then take care of the approvals, scale up of production and marketing."

Chartoff and his research lab have developed, in his words, "new polyurethane materials that have superior properties over latex condoms: better elasticity, strength and tear resistance; they are also hypoallergenic, and biodegradable and half as thin as most latex condoms." Their new condom materials are also shape-conforming.

The materials' production process "mimics the process for producing latex condoms," Chartoff said, "so that major new equipment is not required for production."

If he's successful in collaborating with a manufacturer, "time to market might vary with where in the world the product is introduced. Normally for the U.S., that might be two years," he said, noting he wasn't sure how long it'd take to get the condoms to China, India and Africa.

"So far, we are pretty excited about what we are seeing, but ultimately it is a long road to create new products and get them adopted."

Though he was rejected for the additional $1 million grant from the Gates Foundation, Chartoff remains positive about his condom project's future.

"We don't think we are stymied and are actively working to take our material further," he said.

In a Reddit AMA around a year ago, Steven Buchsbaum, who leads the Gates Foundation's Grand Challenges team, answered the public's most pressing questions about the future of condoms. One redditor asked what sparked the idea to hold the competition in the first place.

Buchsbaum and his team had discussed it for a couple of years, "with advocates stressing the incredibly effective role condoms currently play and the opportunity to improve uptake with innovation," he wrote, "and skeptics stressing the substantial industry already trying to innovate and sell more condoms (and the challenge of changing men's behavior)."

It was worth the experiment, they ultimately decided, "to determine if there really is untapped innovation."

"So far, we are pretty excited about what we are seeing," Buchsbaum wrote, adding, "but ultimately it is a long road to create new products and get them adopted."