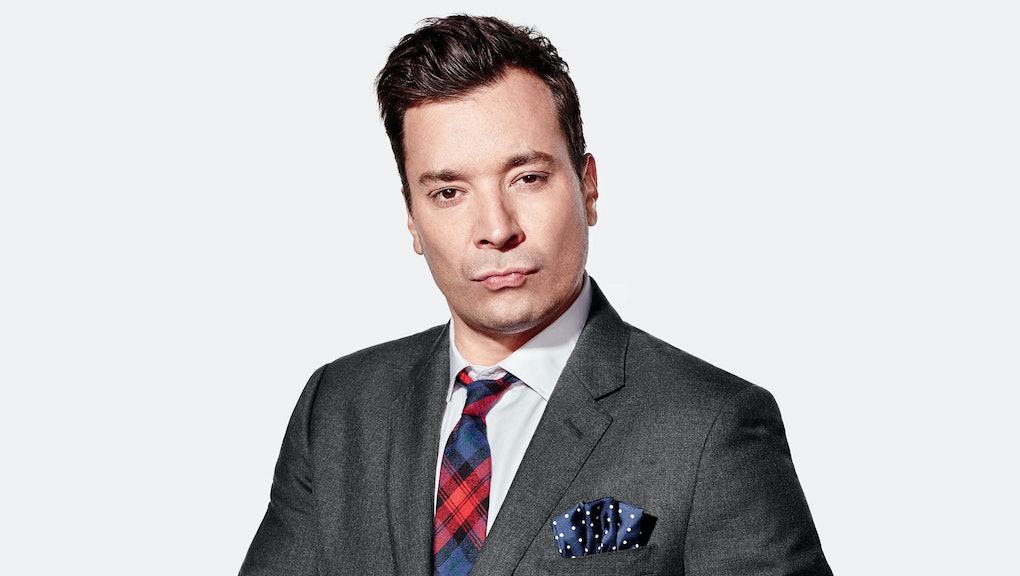 We knew that Jimmy Fallon could host a mean Tonight Show, but we definitely didn't know he was a mad genius when it came to tech accessories.

On his show Wednesday night, Fallon made an announcement. Lately, he said, he had been thinking of how many men he sees in his office with their iPhones poking out of their front blazer, rather than a much more dapper-looking pocket square. Secret innovator that he is, he put on his thinking cap and came up with what he calls the "Pocket Dial."

Fallon showed the audience his product, saying, "I made a prototype with a hot glue gun and an iPhone case"... before explaining that he pitched the idea to your preppy aunt's favorite store, J.Crew, and "they loved it."

Now, it's a real J.Crew product and, honestly, it is not a terrible idea at all.

Currently on J.Crew's website for a shockingly reasonable $48, the Pocket Dial is a tan leather 6/6s iPhone case with one blue-and-white polkadot pocket square attached, with the option to buy more "refills" of the pocket square fabric for $15.

Because Fallon's a cheeky dude, fabric variations include white linen, paisley and gingerbread men. What else could you possibly need?

Fallon's audience was full of "oohs" and "aahs" as he played around with the case, perhaps a sign of its practical genius. The styling alone is basically J.Crew distilled — a bit of class, a bit of humor — and Fallon makes the perfect spokesman as one who's never not seen in a streamlined suit these days. His nearly 5-minute explanation of the product was the best commercial the business-casual retailer could have asked for.

Also, as Fallon noted during his show, 100% of the proceeds from the $48 case and its many add-ons go to the David Sheldrick Wildlife Trust, a Kenya-based charity that protects Africa's elephants from ivory poaching and extinction.

With proceeds going to charity, this makes the perfect gift for the holidays so you can impress all your friends with your social consciousness. Get it while it's still available: Before Fallon made his grand announcement, J. Crew's holiday ad was already up and running, featuring Fallon in a winter wonderland while pouring a nice cup of eggnog and telling the story he told on his show.

Feel free to watch the ad below and mark just one more person off your holiday shopping list. Plus, it's far chicer than Fallon's other clothing invention...