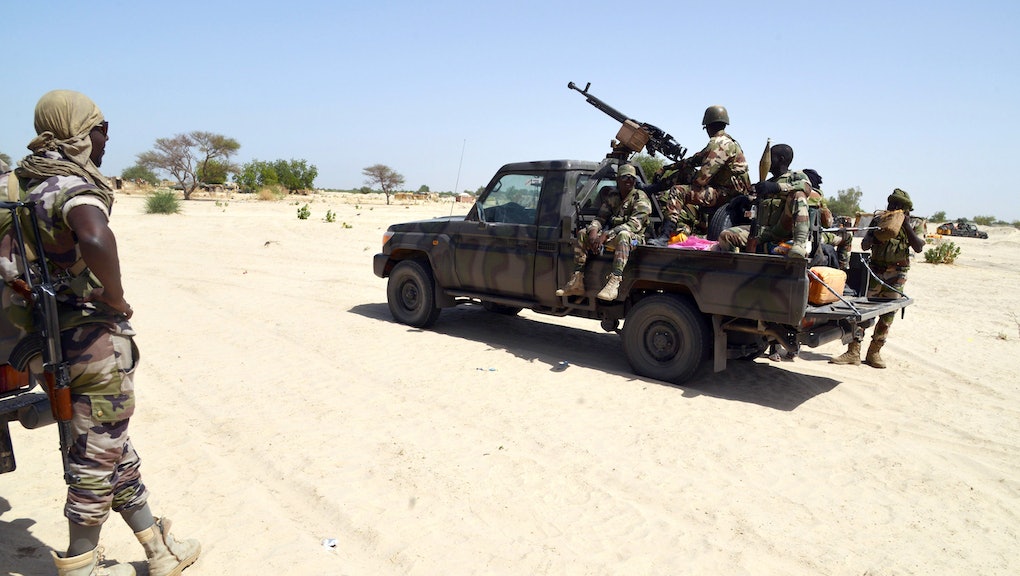 Boko Haram Suicide Bombs Kill 15 in Nigeria, 1 Bomber Was a "Girl Aged About 11"

Bombings by the Islamic extremist group Boko Haram left at least 15 people dead in northern Nigeria on Wednesday, Agence France-Presse reported. The attack, which comes 24 hours after a similar bombing that killed at least 32, occurred at a market in the city of Kano by two female suicide bombers who are believed to be 18 and 11 years old.

"A minibus carrying some women came to the Farm Center GSM market and dropped off one girl aged about 11 and another aged about 18, both wore the hijab," a Kano police spokesman told Agence France-Presse. "One went inside the market, the other stayed outside. Then they exploded, killing themselves and others nearby."

The attacks come as a new report by the Global Terrorism Index declared Boko Haram — which has been said to mean "Western education is forbidden" — as the most dangerous extremist group in the world, with more confirmed killings to its name than second-place ISIS. Still, the two groups share a similar fundamentalist Islamic ideology, and Boko Haram has officially aligned itself with their Levantine counterparts, dubbing itself ISIS' "West Africa Province," the Associated Press reported.

The spate of attacks comes as a major blow to Nigeria's new president, Muhammadu Buhari who rose to power in May on a promise to eradicate the militant group. It was something his predecessor, Goodluck Jonathan, had failed to achieve. According to Agence France-Presse, Buhari, who previously ruled the country as dictator between 1983 and 1985, has ordered his military to crush Boko Haram by next month. Agence France-Presse estimates that Boko Haram has killed nearly 1,500 people since Buhari became president.

Unlike the Islamic State group, Boko Haram has mostly confined its activities to Africa, avoiding ISIS-level notoriety on a global scale. Despite routine bombings in Nigeria's Muslim north, the group only came to prominence in the West after it kidnapped 234 girls from a school in the city of Chibok — although at the time, the media almost didn't cover it at all. In April, Nigerian soldiers rescued nearly 300 girls from the country's Sambisa Forest, though — in a reminder of how many stories don't get reported — none of them, reportedly, were the Chibok girls. It is not known whether the girls that carried out Wednesday's suicide bombings were kidnapping victims.

It's unclear what additional steps Nigerian officials have planned for deterring future violence from the terrorist group, or for reforming the country's corrupt institutions that abet its success. Last month, President Barack Obama ordered 300 soldiers to Nigeria's southeastern neighbor, Cameroon, to help stamp out the threat.