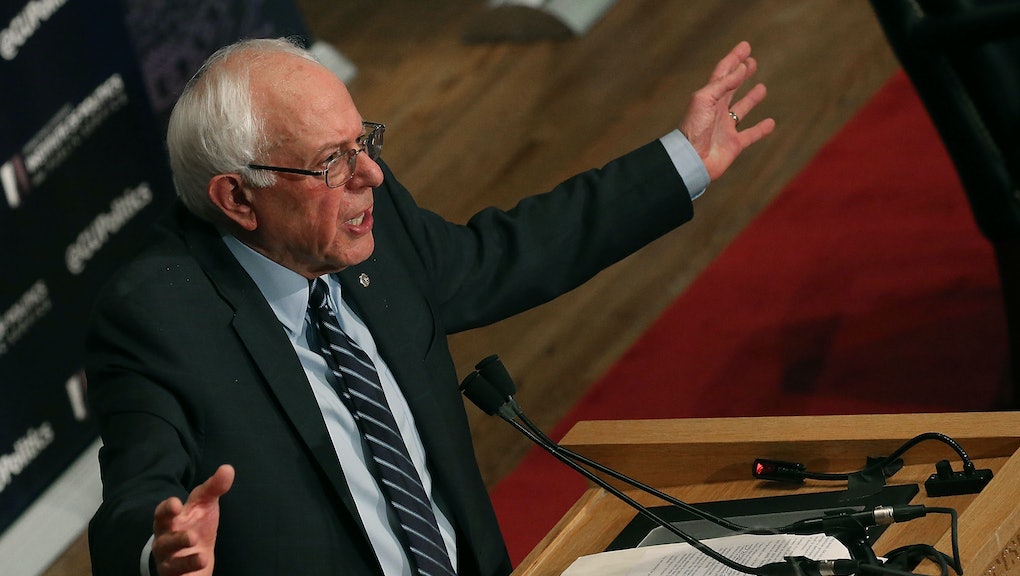 On Thursday, Sen. Bernie Sanders (I-Vt.) made the long-awaited case for why the word "socialism" isn't a slur.

While many political observers were once convinced that the Vermont senator's self-description as a "democratic socialist" would hobble his White House run, he's managed to become a legitimate contender for the Democratic nomination.

And so the time had come for him to clarify his affiliation with the loaded S-word. Among young people, "socialism" doesn't carry the same negative connotation it once did, but it's still a term considered inherently pejorative across much of America. Sanders, 74, is old enough to recall the poisonous effects of being perceived as sympathetic to communism during the era of McCarthyism.

In his speech on Thursday at Georgetown University, Sanders made it clear that he doesn't subscribe to one of the central tenets of classic socialism. "I don't believe government should own the means of production" he said, according to his prepared remarks. But he didn't repudiate the term "democratic socialism." Instead he embraced it, explaining what the term means to him, and argued forcefully that it falls squarely within the American tradition.

"I don't believe in some foreign 'ism,' but I believe deeply in American idealism," he said.

Sanders' speech defending democratic socialism won't be a death-knell for his candidacy, nor will it be likely to satisfy his fellow democratic socialists. His address was mainly an argument for expanding the liberal welfare system that former President Franklin D. Roosevelt inaugurated with the New Deal. But the speech was powerful nonetheless.

His most clever rhetorical technique and observation on power came when he quoted Dr. Martin Luther King Jr., who was a closeted socialist most of his adult life, saying, "This country has socialism for the rich, and rugged individualism for the poor."

The least we can do, contended Sanders, is to extend the kind of government assistance provided to the wealthy to the poor.

The speech: Sanders' speech was a roaring defense of the legacy of FDR and his brazen attacks on the "ruling class."

"Against the ferocious opposition of the ruling class of his day, people he called economic royalists, Roosevelt implemented a series of programs that put millions of people back to work, took them out of poverty and restored their faith in government," Sanders said, according to his prepared remarks. "He redefined the relationship of the federal government to the people of our country. He combatted cynicism, fear and despair. He reinvigorated democracy. He transformed the country."

"And that is what we have to do today," Sanders said.

Sanders spoke about how the liberal icon's popular social programs, like Social Security and unemployment assistance, were tarred as "socialist" in their day.

"Unemployment insurance, abolishing child labor, the 40-hour work week, collective bargaining, strong banking regulations, deposit insurance and job programs that put millions of people to work were all described, in one way or another, as 'socialist,'" Sanders said. "Yet, these programs have become the fabric of our nation and the foundation of the middle class."

These crucial social services serve as the foundation for Sanders' interpretation of democratic socialism. Here, Sanders' speech is worth quoting at length:

So let me define for you, simply and straightforwardly, what democratic socialism means to me. It builds on what Franklin Delano Roosevelt said when he fought for guaranteed economic rights for all Americans. And it builds on what Martin Luther King Jr. said in 1968 when he stated that, "This country has socialism for the rich, and rugged individualism for the poor." It builds on the success of many other countries around the world that have done a far better job than we have in protecting the needs of their working families, the elderly, the children, the sick and the poor.

What does Sanders mean when he talks about socialism for the rich? He's talking about the way that corporations and banking executives benefit from tax loopholes that allow them to pay less in taxes on their income than secretaries. He was talking about how the banks that caused the financial crisis were bailed out on the backs of taxpayers — and rebounded to reap sky-high profits in no time — while poor Americans were cut loose from unemployment insurance and had their homes foreclosed upon during the Great Recession.

The difference between Sanders and rival Hillary Clinton was perhaps most apparent in the way he linked economic inequality to political corruption, an issue that surfaced during the most interesting clash during the last Democratic debate.

"The bottom line is that today in America we not only have massive wealth and income inequality, but a power structure which protects that inequality," Sanders said. "A handful of super-wealthy campaign contributors have enormous influence over the political process, while their lobbyists determine much of what goes on in Congress."

One of the most paradigm-shifting remarks from Sanders came when he tied economic security to freedom — a link made by FDR, but a framing that's largely been lost by liberals since the Ronald Reagan era.

Sanders also spent a significant part of the final sections of his speech discussing his stance and strategy on ISIS, and he used the opportunity to express skepticism of intervention and make the case for a robust multilateralism.

Foreign policy has never been Sanders' strong suit, but he did make a remarkable foray into the past failures of American intervention, the kind of survey that you would never have heard from President Barack Obama during his criticism of the Iraq War when he ran for the presidency in 2008.

"Rushing to war, regime change in Iraq, or toppling [Prime Minister Mohammad] Mossadegh in Iran in 1953 or Guatemalan President [Jacobo] Árbenz in 1954, Brazilian President [João] Goulart in 1964, Chilean President [Salvador] Allende in 1973 — these are the sorts of policies [that] do not work, do not make us safer and must not be repeated," Sanders said.

The other, more notable feature of Sanders' discussion of the approach toward ISIS was his eagerness to place the burden on Arab states to lead the effort.

"ISIS is a struggle for the soul of Islam, and countering violent extremism and destroying ISIS must be done primarily by Muslim nations – with the strong support of their global partners," Sanders said.

Cooperation abroad, and class war at home. Sanders isn't really a socialist, but he's certainly not a typical Democrat.