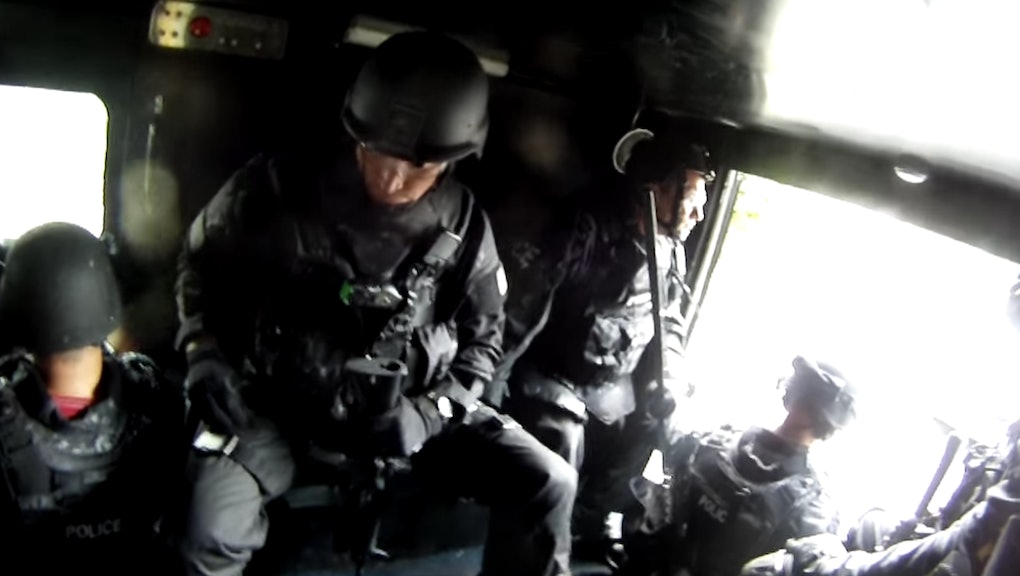 The Internet's Favorite, Most Dangerous Prank Could Soon Be Illegal in All 50 States

You pick up the phone and give the police an address. Tell them through tears that there are hostages at the household and that you need police assistance immediately. They arrive with AR-15s, flash-bangs and battering rams — and find a 19-year-old kid playing Call of Duty in his boxers.

Congrats! You just "swatted" that noob. Swatting is a new kind of prank that sits at the sweet intersection of Internet trolling and the militarization of the American police force.

Until now, swatting has been a state-by-state issue, with a patchwork of anti-swatting bills in states like California and New Jersey. But Rep. Katherine Clark (D-Mass.) is trying to settle the issue federally, with a national bill called the Interstate Swatting Hoax Act that would ban the use of "false communications with the intent to cause an emergency response."

From the text of the bill:

Whoever, with the intent to cause an emergency response by any law enforcement agency, in the absence of circumstances requiring such a response, uses a telecommunications system, the mails or any other facility of interstate or foreign commerce to knowingly transmit false or misleading information indicating that conduct has taken, is taking or will take place that may reasonably be believed to constitute a violation of any state or federal criminal law, or endanger public health or safety, shall —

Put simply: The bill would make it so that in every state, calling a SWAT team on someone else as a prank is punishable with jail time.

A separate clause of the bill requires that the prankster bear the burden of whatever cash is burned as a result of sending an entire police force to break into someone's home.

The dangerous spectacle: The targets of swatting aren't just gamers but gaming live-streamers. On sites like Twitch.tv, where gamers broadcast themselves while they play, the goal is to embarrass the broadcaster by creating a theater out of putting an unwitting gamer at the center of a police raid.

But not only is it a dramatic waste of police resources — some estimates run as high as $10,000 — it runs the obvious mortal risk of putting an innocent person in front of the barrel of a loaded gun.

"Perpetrators of these hoaxes purposefully use our emergency responders to harm their victims," Clark said in the official announcement of the new legislation. "These false reports are dangerous and costly and have resulted in serious injury to victims and law enforcement. It is time to update our laws to appropriately address this crime."