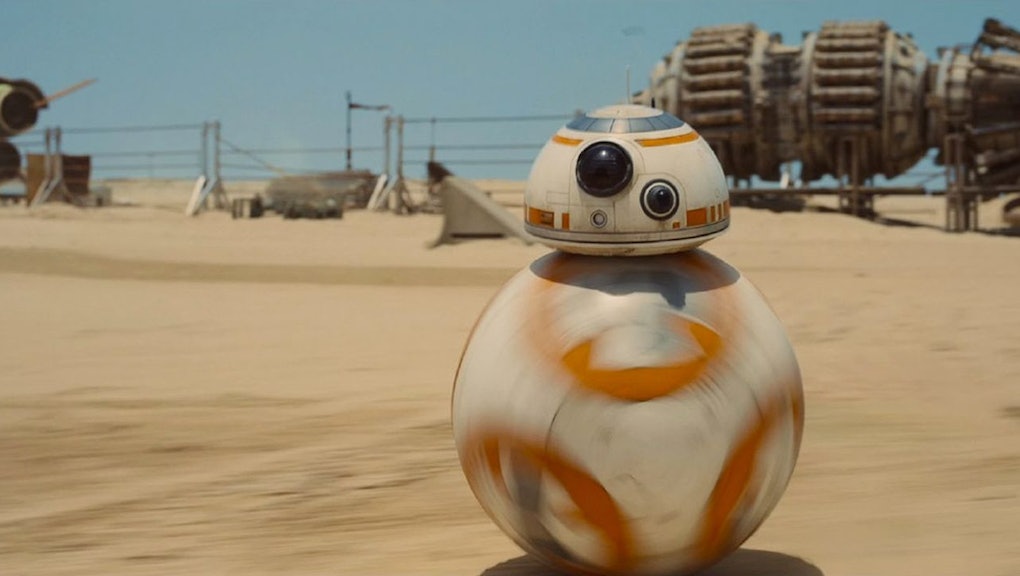 Like Music Videos, Movie Trailers Are Now All About the GIFs

Star Wars: The Force Awakens has yet to open, but already its breakout star is BB-8.

After the teaser trailer for the hotly anticipated film hit the Internet last year, GIFs of the adorably round droid in motion soon flooded social media. The allure depended on seeing it in motion; still images don't do it much justice.

In fact, much of the media coverage for the various trailers for The Force Awakens has centered on GIFs: the best ones, the essential ones, there were even posts that explained the trailer in GIFs. Giphy's library already boasts more than 700 GIFs of the latest film about a galaxy far far away a full month before it opens. This marks new territory when it comes to crafting trailers for the GIF generation.

Compared to the trailer for the second trilogy capper, Revenge of the Sith, the trailer for The Force Awakens shows how trends for big spectacle trailers have changed in just a decade. The clip for the 2005 film aired on television during an episode of The O.C., filled to the brim with new images, including more than 100 different shots. Most of them barely flashed on screen before viewers could register what they were watching.

The trailer rewarded the frame-by-frame analysis that had begun flooding the web with the advent of online copies of trailers (in itself an effect of Episode I's leaked trailer a few years prior) and the ability to screencap those two-and-a-half minutes of promo that had, for the longest time, belonged exclusively to movie theater screens.

In comparison, The Force Awakens includes only half as many shots. The focus is less on a barrage of images that flicker before disappearing than on eye-catching images that linger: BB-8 and Rey walking across the desert, a close-up of Kylo Ren's lightsaber, the Millennium Falcon soaring. Rather than pummel you with endless frames, the trailer offers up as many GIF-able images as possible.

The other most watched trailer of the year, Jurassic World, follows the same guidelines compared to the 2001 trailer for Jurassic Park III, which also opted for close to 100 shots — many of them indistinct from one another. The Chris Pratt-led trailer, however, prioritized the meme-ready shots of Pratt on a motorcycle flanked by raptors. It was a moving image which, like BB-8, worked much better in GIF form than as a mere screenshot.

One can just as easily break up the trailers for the most successful films this year into their GIF-ready sequences: the slo-mo group jump from Avengers: Age of Ultron. Anger's rage rampage from Inside Out, Cinderella's twirling dress transformation. Tom Cruise's plane and motorcycle stunts from Mission Impossible: Rogue Nation. Plus, you can pick basically any scene from the trailer for Minions, as GIF-driven a film as one can concoct.

This turn comes in part as a way to redress the commonly held opinion that trailers are showing "too much" of the films they're trying to sell. Rather than bombard you with images, the year's most sought after trailers cannily focused instead on encouraging the type of fan-activity that drives social media metrics and online visibility. We have already begun seeing this in music videos, which aim to capitalize on GIF-ready shots to gain widespread attention.

This is especially important for trailers whose very usefulness lies in presenting fragments that entice you to watch the whole; a practice that is exponentially multiplied when the shots themselves become widely-disseminated GIFs.

After all, what better way to encourage word of mouth marketing than with the most universal of languages? If a picture is worth a thousand words, a GIF is worth thousands more.