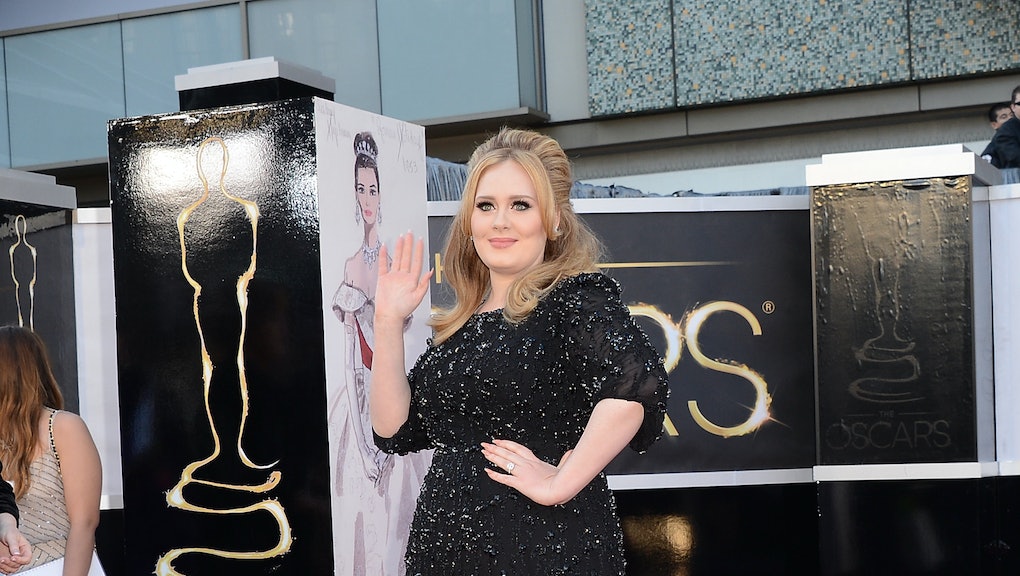 Adele's '25' Is All About an Artist Learning to Love the Most Important Person: Herself

The meaning of Adele's 25 is laid bare early and often. "Hello," a song that Adele confirmed is about coming to terms with herself, is the first track. On "When We Were Young," the British songstress sings to someone, "Everybody here is watching you/ Cause you feel like home/ You're like a dream come true" — appropriate for an artist with a warm, genuine sound.

Nowhere, however, is the thesis more evident than on the seventh track: "River Lea" opens with the most direct bit of self-reflection. "Everybody tells me it's about time that I moved on/ And I need to learn to lighten up/ And learn how to be young," she sings. "But my heart is a valley/ It's so shallow and man-made/ I'm scared to death if I let you in/ You'll see I'm just a fake."

There's real insecurity lying in these lines. At first blush, it feels inauthentic. Isn't Adele the very person who bared her soul to everyone on 21? Could the scribe who came up with such a revealing song as "Someone Like You" really be worried about revealing herself as a fake to us?

Yet 25 is so much more complex than that. It's a brazen, beautiful statement about confronting self-doubt head-on — and coming out on "the other side."

She specifically calls out her fears on "I Miss You," 25's third track. "I miss you when the lights go out," she said. "It illuminates all of my doubts." There's a lot of introspection on 25, much of it tinged with said doubts. That's vital to understanding the album: Adele is growing, but she's not grown.

In multiple songs on 25, Adele sings about the past; "When We Were Young" is most exemplary of her desire to return to youth. The album was written when she was a mere quarter-century old, but the youth to which she refers can't be measured by years. It's about returning to before she had to grow — before heartbreak, before being thrust onto the public stage and before becoming a parent.

Adele's success both personally and professionally is nearly unmatched in the modern musical climate. Yet she clearly has questions about what said success has made of her. "Sometimes I just feel it's only me/ Who never became who they thought they'd be," she sings on "Million Years Ago."

Who did Adele think she would become? From where do these doubts about her growth come?

If 25 proves anything, it's that her fear in "River Lea" is unfounded. Adele is not a fake. She's bracingly honest on this album — not about an ex, as on 21, but about herself. She's coming to terms with who she was in the past and who she is now. Her doubts are not contradictory to the idea of self-love, but merely obstacles to come to terms with on the way.

Before its release, Adele called 25 a "make-up record," explaining that it's about making good with herself. "Making up for lost time," she wrote in an open letter to fans. "Making up for everything I ever did and never did. But I haven't got time to hold on to the crumbs of my past like I used to. What's done is done." That thesis comes through clear in the final product. It's messy — far less focused than 21 — but so is confronting one's demons and learning to love themselves.

25 is a portrait not of the artist Adele, but of the woman Adele Atkins. The portrait may not be flawless, but that's OK. Flaws are meant to be embraced.