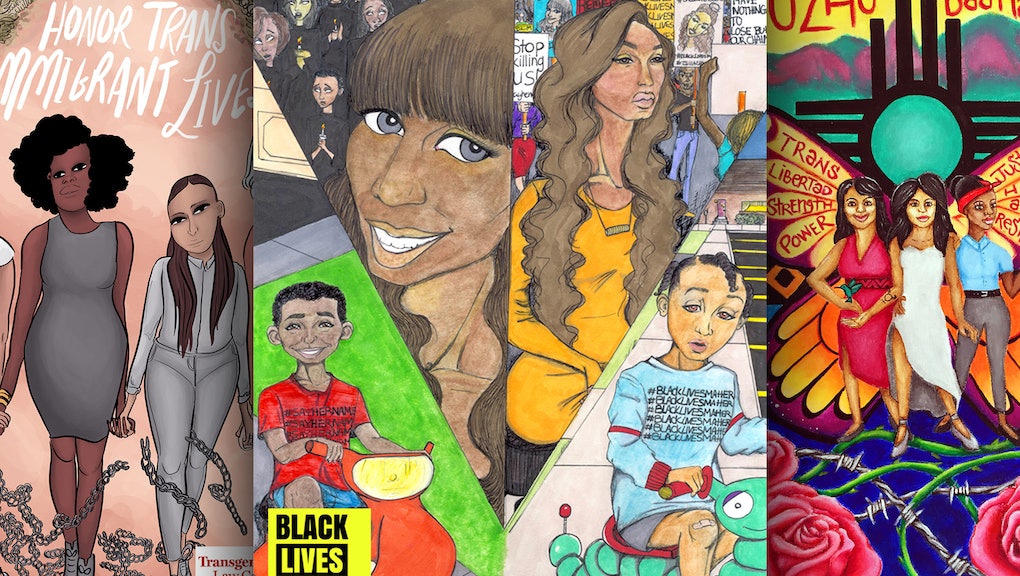 Every year on Nov. 20, transgender people and their allies gather for Transgender Day of Remembrance to mourn those that have died as a result of violence against transgender people. With 2015 being called one of the worst for transgender violence, activists in the trans movement have an especially important message: We can honor the dead and work for the living.

This year's Transgender Day of Remembrance also sees the launch of Transgender Day of Resilience, a collaborative project that paired trans and gender-nonconforming artists with trans justice organizations to produce art that paint trans people not only as victims, but also as leaders of justice and arbiters of change.

Mic spoke with two black transgender women, artist Wriply Bennet and Black Lives Matter activist Elle Hearns, about the importance of resilience, the power of art and the necessity of intersectional activism.

According to Hearns, Black Lives Matter has supported transgender women in local communities before, but this year was its first official participation in the Transgender Day of Remembrance. Hearns and Bennet teamed up to create this work to show how trans rights fall under the umbrella of the Black Lives Matter movement.

"Black Lives Matter focuses on intersectionality and different voices, so it was really important that [the image] captured the intersections of black life, especially black trans women, who are subject to so much violence," Hearns told Mic. "We wanted to create a picture that created a vision that dreamed beyond death and showed that our children could dream beyond death and that trans people could dream freely."

Bennet told Mic she chose to feature India Clarke, the trans woman who was murdered in July, because Clarke's story resonated with her. At the top of the image, she put the words "She Could Have Been Me" with a hashtag.

Bennet said she included hashtags in her artwork to encourage discussion of the plight of black trans women across the social sphere.

"There were all of these hashtags going through social media gaining folks' attention and I didn't see that happening to the black trans women we were losing," Bennet told Mic. "I think this project is a very great reminder that before I am trans, before I am queer, I am a black person. That was one thing nobody had to tell me. That was one thing that was always right there."

Bennet said that, only a year ago, she'd seen people in conversations on Twitter telling trans women to "wait their turn" to get the attention they so sorely needed and deserve. Her artwork pushes back on that sentiment.

Bennet has been active in her local chapter of the Transgender Women of Color Collective in Columbus, Ohio, which responds to problems trans people face within LBGT communities.

"It seemed all the money was going to cis gay black folk or cis gay white folk or trans white women," she said. On a trip with several other trans women to Ferguson, Missouri, Bennet was taken aback by the sheer number of black people; the experience inspired her to start a collaboration between Black Lives Matter and the Columbus organization.

"It was gorgeous," she said. "They were dripping from the balconies, standing in their apartment complexes. It was a river of black people, so many black people in one space."

Bennet and Hearns say they're ecstatic that Black Lives Matter and groups like Transgender Women of Color Collective have started working together to amplify the voices of transgender women.

"We feel so powerless in situations when a lot of cis white sexism takes over and it completely gets us down, our knees buckle, we fall to the ground," she said. "We have to remind ourselves that we are able to get back up after falling."

She added that the spirit of resilience should be part of a year-round conversation about trans black women.

This year on Transgender Day of Remembrance, Hearns will be in Cleveland to support the family of Tamir Rice.

"I'm not interested in spaces where there will be cameras and this whole elaborate scheme to say we're doing something," Hearns said. "I'm more interested in the people who have lost their loved ones, and providing care and support for them."

Bennet and Hearns look forward to the day when the conversation turns more to celebrating the lives of trans women, and less to the mourning of their deaths. Their collaboration is a part of that.

"We really want to get to a place where we can honor black people beyond death," she said. "Wriply is truly focused on doing, I think, justice for folks [in death] who have not received justice in life."

Check out some more images from Trans Day of Resilience below: