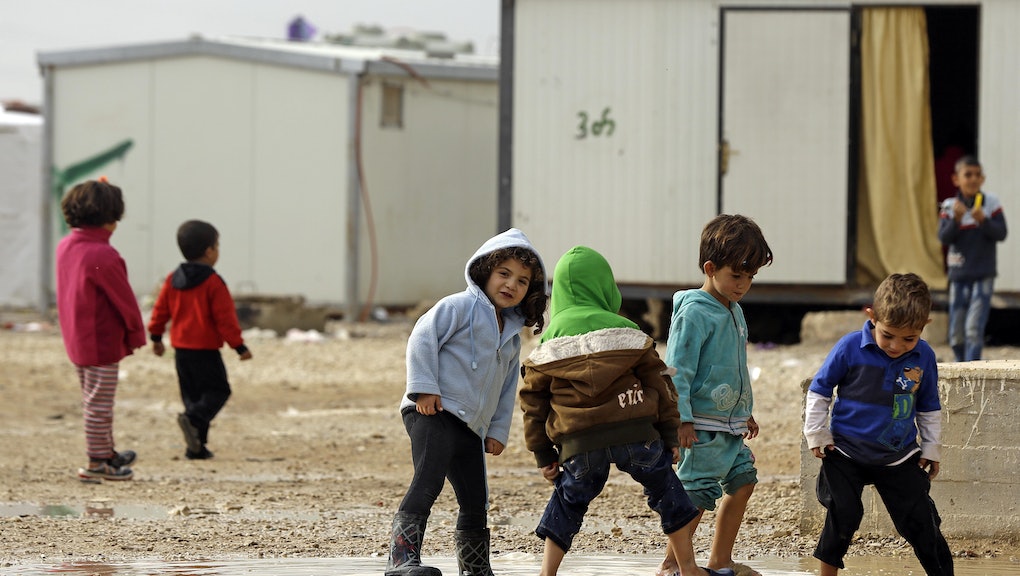 The debate over whether to accept Syrian refugees continues to consume the United States. On Thursday, the House of Representatives voted on a bill which would make it nearly impossible for them to gain admission. Almost at the same time, the Senate Committee on Homeland and Governmental affairs held hearings with experts to determine how the U.S. could be sufficiently protected from ISIS if the the refugee resettlement went forward. And across the country, dozens of governors — mostly Republican — have said they would refuse to accept refugees in their states.

Many of the jangled nerves originated with a comment FBI director James Comey made to the Senate's Homeland Security and Governmental Affairs Committee in which he cast doubt on the thoroughness of the U.S. refugee vetting process. "My concern there is that there are certain gaps I don't want to talk about publicly in the data available to us," he said.

A close look at the vetting process, however, reveals that while absolute security will likely be out of reach, some insist the U.S. refugee resettlement program for all refugees is peerless, with multiple and deliberative layers of inspection and checks built into the process.

"It is one of the most robust security check programs within any immigration process," an employee at the Department of Homeland Security with intimate knowledge of the process told Mic. "I think given the situation recently in Paris, there's an overabundance of caution that is unwarranted."

For most Syrians, the process begins with the United Nations High Commissioner for Refugees, which manages the first round of reviewing and screening potential asylum seekers. The U.N. then refers refugees to relevant countries based on the individual case of the refugees and the participating nation's quota allowances.

If the U.S. is selected, the process is officially handed over to the State Department for review at various "resettlement centers" around the world. From there, refugees undergo a battery of questions relating to their biographical information, details about their persecution story, family history and even old school report cards.

If all that checks out, refugees report to the Department of Homeland Security for additional tests, screening and interviews. The State Department and other organizations undertake "recurrent vetting," or checking and double-checking all refugee information, throughout the process. Any irregularities can shut down an application at any time.

"There is a cadre of officers going overseas conducting the interviews," said the source, who requested anonymity in order to speak freely to the media, adding that the the primary purpose of the Homeland interviews are to determine whether a person meets the technical qualifications for refugee status, and to determine whether or not the individual was inadmissible for some reason based on existing law.

"The questions that [they] ask get to the heart of each of those," the source told Mic.

If refugees pass all that successfully, they must undergo medical exams as well as cultural orientations. After that, preparations need to be made and assured with private, mostly religious groups like Catholic Charities, which make arrangements for refugees once they arrive in their new homes.

"After they've been assured, they go through the travel packet process, plane ticket issues, final security checks run, then they're booked a flight," the government source told Mic.

Someone else with deep insight into the process — and who could speak publicly — was Phyllis E. Oakley, the assistant secretary of state for population, refugees, and migration between 1994 and 1997. Now retired, Oakley was blunt about what she sees as the U.S.' responsibility toward refugees.

"The United States has a long and distinguished record in helping refugees come to the United States and other countries because we have always said it's got to be a shared responsibility," Oakley told Mic. "We cannot turn away from this responsibly and I think Americans, when they think about it, really don't want to."

The former assistant secretary was confident that, while the issue of terrorism has become more pressing since she left office, the current inspection regime is sufficient. "I have confidence that we can do it with greater scrutiny," she said. "The United States has really had the most comprehensive and successful refugee program."

On matters of absolute safety, Oakley demurred, "I would never in my life guarantee it 100%. Anybody who works in anything like this can't do that." Indeed, in 2009, years before ISIS emerged as a major threat, two Iraqi refugees who had resettled in Kentucky were arrested and sent to prison for attempting to send money and weapons to al-Qaeda affiliates abroad.

Statistics reported by the Migration Policy Institute, however, suggest that the 2009 incident is a vast outlier.

"The United States has resettled 784,000 refugees since September 11, 2001," reads the report. "In those 14 years, exactly three resettled refugees have been arrested for planning terrorist activities — and it is worth noting two were not planning an attack in the United States and the plans of the third were barely credible."

"Given the nature of the presidential election coming up, everyone is taking a stance," said Mic's source. "I think it's totally unfounded."

And, for those moved by the concept of hard figures, "unfounded" is, perhaps, a reasonable assessment.