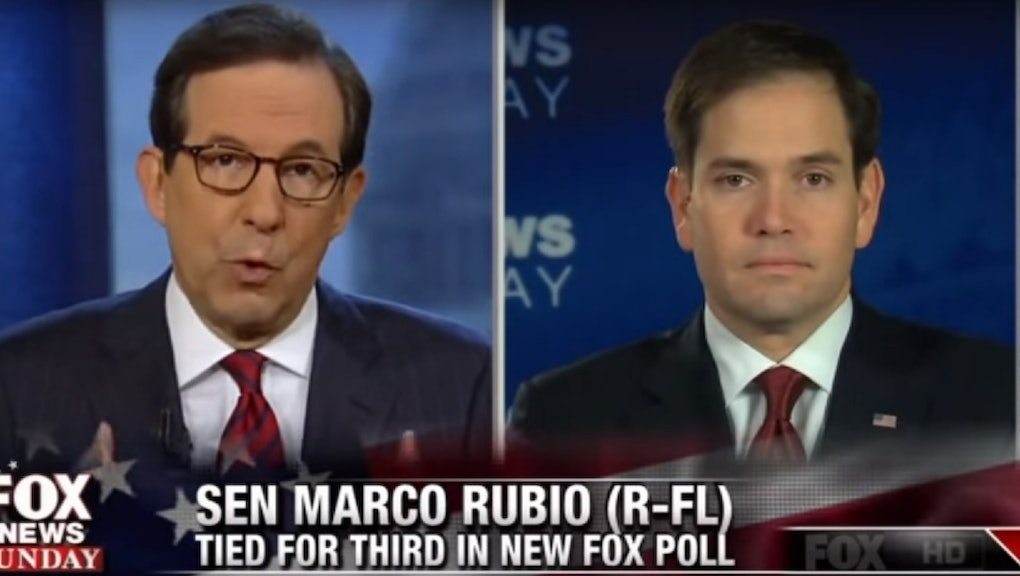 Republican presidential candidate Marco Rubio just said something very revealing (that he probably shouldn't have) about his party's response to terrorist attacks linked to the Islamic State group in Paris on Nov. 13, which killed at least 130 people and wounded more than 350 others.

While discussing polling with host Chris Wallace on the Nov. 22 edition of Fox News Sunday, Rubio told viewers he believed the terrorist attacks resulted in a "positive development" in that they influenced Americans to become more concerned about terrorism. He said he believed that Republicans could play the incident for "political advantage."

"As far as national security, let me just say I obviously am not happy about the events that happened last week in Paris, but I think it's a positive development that it suddenly has forced Americans to confront more carefully the issue of national security," Rubio said. "Because it is the most important thing a president will do and it is the most important function of the federal government."

"I hope that we focus on that note more, not just for political advantage, but because the world has become a very dangerous place," he continued in an apparent reference to his party's chances to win the presidency and other offices in 2016.

Without a doubt, Republican presidential candidates are emphasizing their foreign policy and national security credentials this campaign cycle. It's not much of a secret that fears of future terrorism have benefited GOP candidates, like incumbent President George W. Bush in 2004.

But Rubio was probably being too frank about the positive side of the attack for Republicans at a time when victims are still dying in hospitals. At least voters now know what he's thinking.

Rubio, and the GOP more generally, may be overplaying their hand if they think the Paris attacks will dramatically affect the upcoming presidential elections in 2016. As the New York Times' Brendan Nyhan wrote earlier this month, dramatic events like terrorist attacks or Ebola outbreaks "often seem tremendously important at the time," but also often fail to translate into sustained political momentum.

"With the economy growing relatively steadily, the prospects for a classic referendum campaign against the party in power are uncertain," Nyhan wrote. "That's why so many GOP candidates seized on the events in Paris, which allow them to emphasize an issue in which their party has tended to have an advantage in recent decades."