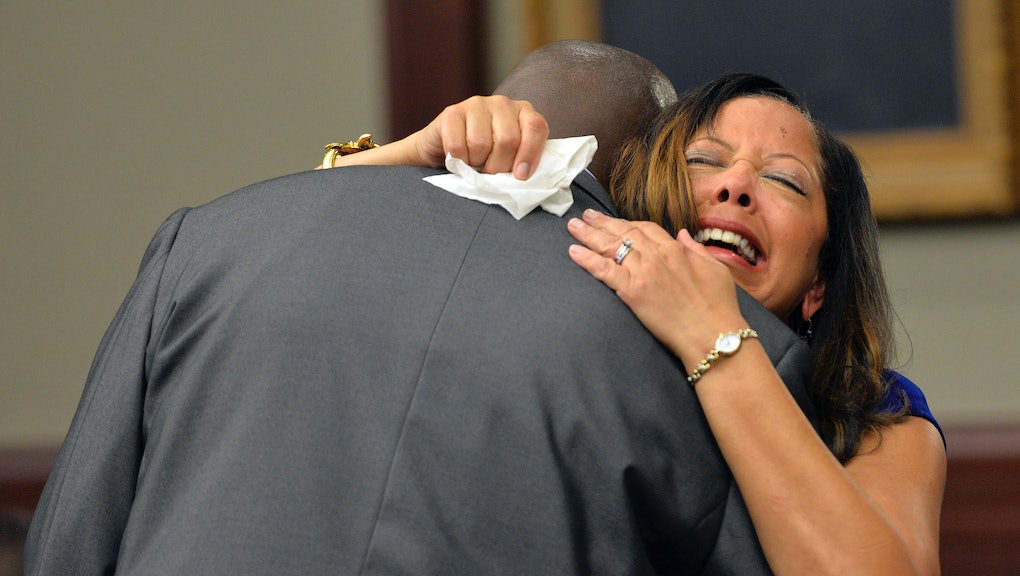 Jordan Davis' Killer Is in Jail, but His Parents' Fight for Justice Is Far From Over

The last time Lucia McBath spoke with her son, Jordan Russell Davis, was on Thanksgiving Day 2012.

Jordan was living with his father in Jacksonville, Florida, at the time, and McBath remembers him being especially effusive when she talked to him on the phone that evening. "He was just so excited and joyful and thankful," McBath told Mic. "He told me, 'Mom, you've always stuck by me. I know I haven't told you how much I love you lately, but I love you' ...

"He went on and on. [We] talked about [him] coming back to Atlanta to visit for Christmas ... Then he said, 'I love you, peace out.' And that was it."

Jordan's father, Ron Davis, has a similar memory of his son that day. "All morning he'd been calling his friends, wishing them a happy Thanksgiving," Davis told Mic. "He asked to do the prayer before dinner, which was unusual. Other years I'd ask him to lead the prayer and he wouldn't do it, he'd just make a joke or say something silly ...

"But he had a great prayer that year. And I told him that."

Neither parent could have predicted what happened to Jordan the next day, or that it would spark one of the more galvanizing criminal trials in recent memory. The details are outlined in the documentary, 3 ½ Minutes, 10 Bullets, which airs Monday night on HBO, 10 months after winning a Special Jury Award for Social Impact at the 2015 Sundance Film Festival.

In anticipation for the film's release, Mic spoke with Jordan's parents, McBath and Davis, about their son, his legacy and the work they do to ensure other black boys are spared his fate. Although they are among the few black parents to win legal recourse against their child's killer in recent years, they are still heavily involved in current advocacy movements, and maintain a strong sense that despite their court victory, their battle for justice is far from over.

"If that had to be the last time I saw my son alive, it was a great moment." — Ron Davis

It's a fate they wish they could have avoided, of course. On Black Friday three years ago, Jordan Davis, 17, left his home in Jacksonville in a Dodge Durango with three friends, intending to stop by a nearby mall to visit his girlfriend at work and take advantage of the sales. He asked his father for a few dollars on his way out.

"I gave him some money and told him be home by 11:30 that night," Davis said. "He said he would, then, 'Take care Dad,' hugged me and smiled. If that had to be the last time I saw my son alive, it was a great moment. Sometimes you're fighting, but if that was the last time, it was a good one. I was blessed."

Jordan and his friends made their way to a gas station that evening, where they got into an argument with a 45-year-old white man named Michael Dunn over how loud their music was. Matters escalated quickly — Dunn pulled a handgun from his glove compartment and opened fire on the car full of boys, unloading 10 bullets into the side of the vehicle. Jordan was the only one who got hit. He died from a gunshot wound to the abdomen shortly after, with the fatal bullet piercing his aorta.

Dunn and his fiancee, Rhonda Rouer, then drove to their motel, ordered a pizza and stayed the night without contacting police. Dunn was arrested the day after the shooting. He was eventually found guilty on three counts of attempted murder, but won a mistrial on the most serious charge — first-degree murder.

The reason for this was some jurors' interpretation of Florida's "stand your ground" law, which allows citizens to respond with deadly force if they perceive a threat to their safety. The law was famously invoked to acquit George Zimmerman, the neighborhood watchman who shot and killed 17-year-old Trayvon Martin in Sanford, Florida, of murder in 2013.

"I had never really heard of that law other than the Trayvon Martin case," McBath said. "I still didn't understand the dynamics, or how it was used. ... Most definitely, now that has completely changed. My learning curve has gone straight up."

Dunn claimed throughout the trial that Jordan had brandished what appeared to be a shotgun at him, and he feared for his life. No weapon, or anything resembling a weapon, was found on the scene. And despite his defense team insisting the case was not about race, recorded phone conversations between Dunn and his fiancee show a man whose disdain for so-called "thug music" and the cultural erosion he thought it conveyed reflected what he saw as broader pathologies inherent to blackness, including absent parents.

"Where are their fathers?" he asks at one point in the film.

"We saw the undercurrent of racism at the trial," McBath said. "We saw [Dunn's] jailhouse letters. There was no doubt this was very racially motivated. He talks about black prisoners as thugs, and at one point says if we took guns and shot these people down, maybe they'd get the hint and stop acting how they do.

"We were not surprised or blindsided. But you also learn racism. You have to be taught. At one point, I felt very sorry for him. He's living in his own hell."

"Michael Dunn can say whatever he wants [about fathers and me as a father]," Ron Davis said. "This man knows nothing about being a father or having kids ... That he devalued lives and tried to murder all four of those kids, not just Jordan, all four of those kids ... It's not what people say about you, it's who's saying it. Is it someone you respect?"

"Politicians are playing politics, and my people are dying." — Lucia McBath

In October 2014, Dunn was re-tried and convicted for Jordan's murder. A Jacksonville judge added a life sentence without parole to an already daunting 90 years plus 15 more for three counts of attempted murder and firing into an occupied vehicle, respectively. It was a long-awaited victory for Jordan's family. But it was just the beginning of their advocacy work.

McBath regularly meets with politicians and testifies at hearings nationally around common sense firearm legislation, along with open carry law and child access prevention. "The power [to change these laws] is on the state level, in the legislative houses," she said. "The power is with the legislators who are letting these crimes happen. If we don't challenge that power, we're part of the problem. It's all about taking our power back."

"We need to tell [this message] to the people we aren't already reaching," Davis said, "the white people who stay in all-white churches, clubs, conferences. ... Until white people take up the mantle and say, 'I'm going to talk about this in my circle,' then we're not going to reach more of society than we can reach right now."

Informing their work is a sense of purpose that inevitably stems from reckoning with the brutal and premature theft of their son's life. This comes with no small dose of pain, and even, at times, regret. "One thing I would say [to black parents] is, make sure that you advise your kids, and do not shelter them," Davis said. "Let them know the world they live in is a dangerous world. Jordan didn't realize how dangerous this world was."

The toll is great, but the work grows only more necessary as time passes. "I can never turn it off," McBath said. "I feel like I'm pregnant with it every day of my life ... The more time we take changing the laws, thousands more people continue to die. Politicians are playing politics, and my people are dying. This work is urgent. Either you are in it, or you're not, and I'm up to my neck in it. I'm drowning."