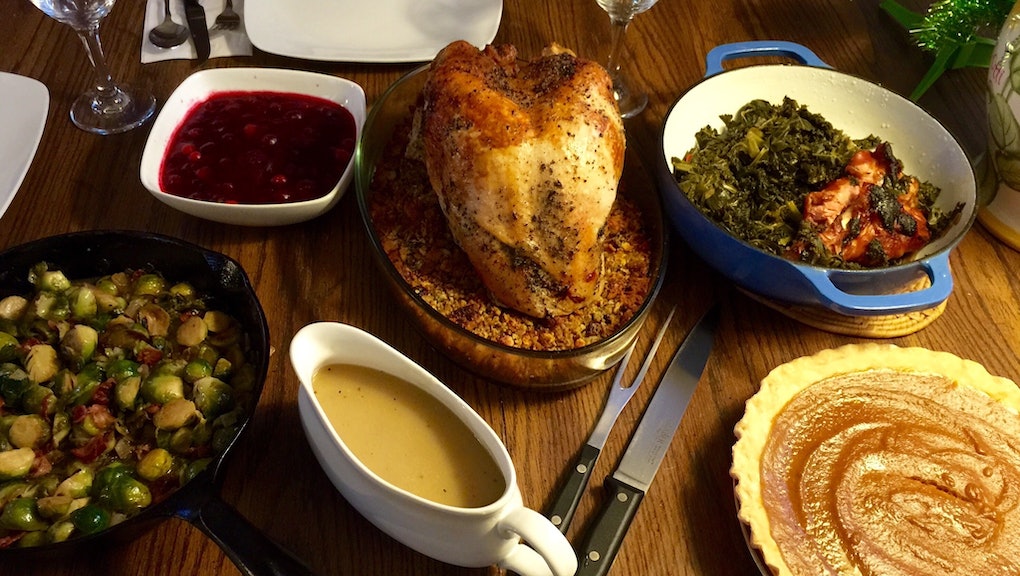 Here's the Truth Behind Thanksgiving, One of the Most Mythical Meals in America

Native Americans living in the Northeast, like Game of Thrones fans, knew one thing at this time of year: Winter is coming. As such, now was the time for one last glut of food before a four-month-at-least period of traveling along with migrating prey in order to hunt for fresh food. In that sense, yes, Native American harvest feasts are a clear primogenitor to today's Thanksgiving.

But the truth is more complex. As Thanksgiving matured as a holiday in the Americas, many of the inhabitants in the United States — Native Americans, settlers and enslaved Africans — contributed elements of our modern Thanksgiving meal to the table.

If Thanksgiving is an American tradition, then its roots are as varied and widespread as America, as well. To put it simply: There are a lot of ingredients in this melting pot. To find out the roots of many of our favorite culinary traditions, Mic spoke with Michael Twitty, culinary historian and founder of the blog Afroculinaria.

Thanksgiving and America: According to Twitty, Thanksgiving dinner is one of the most mythologized meals in America. But, when you get to the bottom of the ceremonial dinner, it's a story about America.

"This meal says a lot about the real nature of America," Twitty said. "It is more whole wheat than it is white bread. This is why people should know food history. Food history is the way of getting at the cultural genealogy of the world that you live in, how it came to be."

He added, "And when you know and you understand that it becomes a lot harder to make pronouncements about people or even yourself when you understand how things really came to be."

Turkey: Without turkey, Thanksgiving would be a flightless bird. Turkey was not, however, the main meat at early Thanksgivings. That was probably a different bird — goose or duck — and venison or wild deer was probably served too. Though turkey didn't become a part of the national celebration until the late 1800s, wild turkey was definitely eaten by settlers. They were probably familiar with it before they had departed for America, in fact.

Modern "reinventions" of turkey preparation, Twitty said, are especially interesting. Rather than being innovations, they may actually be bringing the bird back to some pre-American roots.

"If you look at a deep fried turkey, fried food traditions, deep-frying — that is West African. But the turkey is a new world domesticate," Twitty said. In fact, Twitty said, many of the items on our typical Thanksgiving menus are not the product of cultural appropriation or cultural contribution but actually cultural collision, where two cultures rub up against one another and create something new. That, he said, is a metaphor for America. "If you're talking about spicing this thing heavily, deep frying it in a soulful Southern way — that's collision right there."

He added, "It encapsulates how much we don't understand about our own narrative."

Stuffing: Filling a bird with a starch has been a culinary tradition since Roman times. Europeans and the settlers have a great love of stuffing — also called dressing — but exactly what kind of stuffing you use, and what you include in it, can be very telling of its origins.

For instance, cornbread stuffing, Twitty said, is another example of a cultural collision. Native Americans domesticated corn and introduced it to the European diet. For those who add something spicy or colorful to their dish, this might be a touch of what native Africans brought to Thanksgiving traditions.

"Native Africans loved food that was spicy and colorful," which is why many of our stuffings and dressings remain colorful today, Twitty said. He added that, in order to keep African traditions alive, some native Africans may have begun to replace traditional African couscous with cornmeal in their recipes, making cornmeal stuffing a hybrid of European, African and Native American influences.

The most popular stuffing on the menu at the time was probably a peculiar item that rarely pops up on menus now — oyster stuffing.

Oysters and other foods left behind: If Thanksgiving was about cheap, accessible comfort food, then it makes a lot of sense that vintage culinary staple oysters were often on the menu. There was a time before hot dog carts that oyster carts distributed oysters on the cheap and the first canonical Southern cookbook included a recipe for oyster ice cream. Early Thanksgiving feasts probably included lobster, a shellfish so cheap and abundant that it was often used for fertilizer.

According to Twitty, one reason behind this change in Thanksgiving fare: scarcity.

"We go through these cycles of abundance and scarcity and those drive whether or not a food is high up or low on the scale," Twitty said.

Scarcity is a major theme in the Thanksgiving narrative for many reasons. Rather than a tale of mutual contribution, Twitty said, the Thanksgiving narrative is one of adaptation for survival. The settlers were people in exile who used the Native Americans as role models on how to survive. Native Africans had to acclimate to European culture while finding a way to keep their culture alive.

This moment in history, this global exchange, Twitty said, is a story best told by food. "Those millions of people moving back and forth, the food tells the story," he said.

Potatoes: This starchy staple is a Thanksgiving mainstay, but also a food with myriad cultural meanings. While the white potato has its origins in South America and was brought to Europe by sailors returning to Europe, the sweet potato is wholly different.

Sweet potatoes were mostly a food enjoyed by slaves, as it most closely resembled the West African yam. In fact, "candied yams" have a direct descendant in a popular slave snack from the West Indies.

On West Indian sugar plantations, slaves would boil sweet potatoes in cooling sugar that was to be made into molasses. The job was very dangerous and involved ladling huge vats of boiling sugar.

"There are references to enslaved Africans dolloping over sweet potatoes this molten hot cane juice and it was so hot that anything sitting in this stuff for 20 minutes is going to cook," Twitty said. Sugar was native to Southeast Asia and brought over to the Caribbean as part of the sugar trade. Slaves living in the Caribbean dolloped it over sweet potatoes, a stand in for West African yams. The French-invented marshmallows and the two were paired together in a cookbook for the first time in 1917.

These cultural collisions are not isolated in the past, Twitty said. Twitty said our discussion of Thanksgiving was especially pertinent during the ongoing Syrian refugee crisis. Americans, Twitty said, can look to the Thanksgiving story for inspiration.

Settlers would go through a "seasoning period" upon arriving in American that would often leave them malaria-ridden, facing death and with dwindling numbers. The story of Thanksgiving is one of Native Americans showing mercy helping new Americans find ways to survive.

"These are white refugees fleeing Europe looking for the holy grail of survival in the new world," Twitty said. "It was about mercy for these people who were refugees. Every time somebody showed up, all hell broke loose, this wasn't Native Americans first time at the rodeo."

He added, "They knew there would be a great dying. Eighty percent of your people die off and then you still help these people out after the fact! It's a miracle."