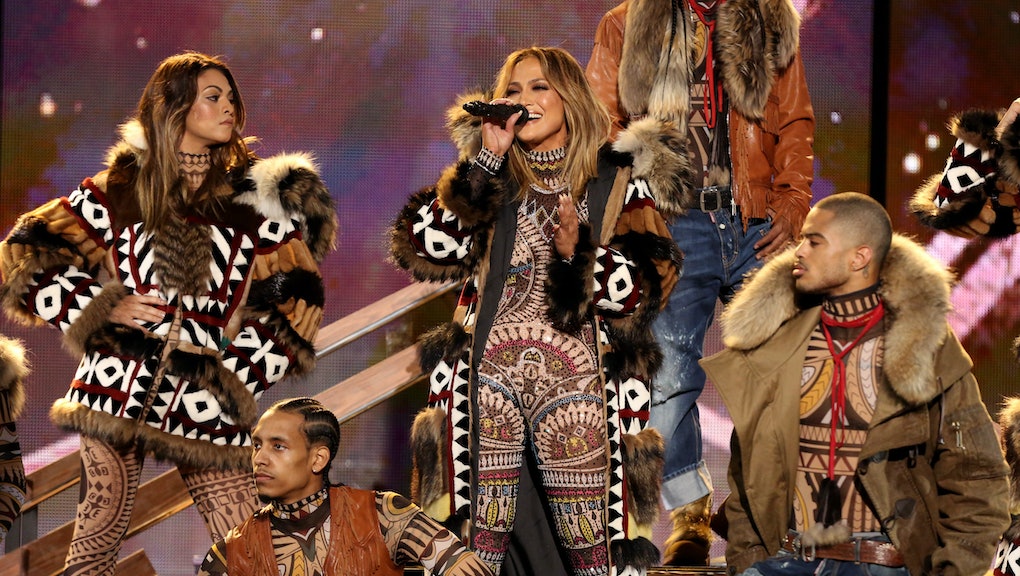 As she shook her stuff on stage, fans took note of her signature ageless glow, her perfect caramel highlights and her "tribal" jumpsuit, which she paired with a Native-inspired fur coat.

Can you guess what's causing some of her fans to pause?

Although Lopez had several looks throughout the night — like a fun hot pink dress and a bright yellow jumpsuit — this was the one look that earned a certain kind of reaction. While most fans noted her impressive dance moves (and the fellow celebrity reactions), some viewers cited the outfit as an uncomfortable instance of cultural appropriation.

This isn't the first time these clothes have made waves in a negative way. Lopez's outfit was by the Italian label DSquared2 and was based on the designers' Fall/Winter 2015 collection, which was called "Dsquaw." The line specifically included "magic and mysterious tribal influences," according to the show notes.

Released in March 2015 at Milan Fashion Week, the line immediately came under fire from Native American groups and media critics for cultural appropriating Native American imagery and styles in an offensive way.

As Teen Vogue notes, the look Lopez wore on Sunday night was actually custom-made, but looked identical to the Dsquaw collection, and the designers happily took credit for the outfits on Twitter.

It's perhaps surprising that a superstar of Lopez's caliber would choose an array of outfits that invited such swift backlash when they first debuted — particularly for a big opening number that's already been viewed thousands of times on YouTube. Just this Halloween, Nicky Hilton was called out for dressing in Native American garb, and last year, A-listers like Pharrell and model Karlie Kloss were too.

So far, though, Lopez hasn't received nearly as much backlash as the original runway show did earlier this year.