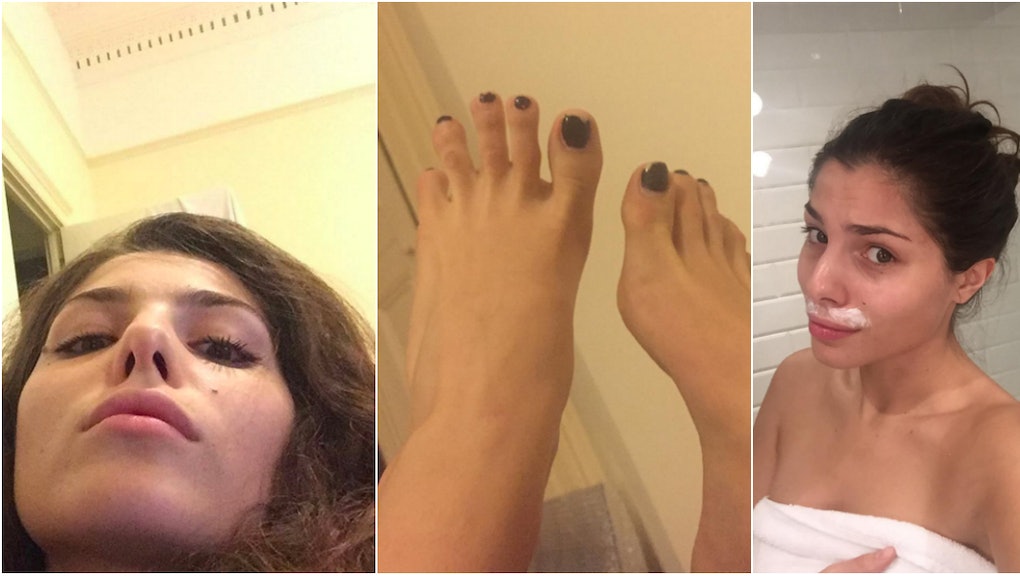 Stina Sanders is the latest Instagram starlet getting attention for a drastically different reason. The self-declared model and blogger, who resides in London, took on a challenge from the Daily Mail to post "photographs to her followers that would never normally make the cut."

For a week, the Daily Mail said, Sanders "swapped her normal, polished images of bronzed limbs, cocktails and five-star hotels" for more vulnerable, everyday photos — getting rid of her pesky facial hair, showing off her chipped nail polish and mentioning her irritable bowel syndrome. She still looked beautiful, of course, but the filters were gone, as were the glam settings.

The photos went from this...

"I was definitely up for the experiment because for a while, I've realised how fake social media has become," Sanders told Mic. "I was tired of hearing people say how glam my life is because of the images I share. What they don't know is I suffer with anxiety and I have a disabled sibling. I wanted to not only reveal what is actually behind my mask but how easy social media can portray someone's life to be something else."

The result? A big drop in followers.

"I thought that my followers would remain the same but I would get no likes, but the total opposite happened," Sanders told People. "I had an influx of likes, but I had a massive decrease of followers." The total clocked in at around 5,000 followers lost, she told the Independent on Monday.

Deciding to keep things real: But she also gained some new followers — so she's keeping the experiment going. This weekend, Sanders posted for her followers:

Hey new followers! thank you so much for all of your support its been over-whelming and I've been trying to reply to all of your comments but it's taking forever so I thought I'd make things simple. For Monday's next blog post, I'm going to select a few of your questions and answer them with the limited knowledge that I have  Q&A style!  Ask me anything that you want, whether thats on #anxiety, #body issues, #beauty products, #feminism or anything that's on your mind Would be great to learn more about you guys so please comment below ?? #AskStina

Sanders has decided to use her social media platform not only to expose the fakery so rampant on sites like Instagram, but to tackle some issues she now knows her followers relate to, including anxiety, depression and body image.

Describing reactions to the experiment, Sanders told the Independent, "Take the psychotherapy image, for example; so many people praised me for talking openly about it. I had lots of people thank me because they had felt alone and just needed the reassurance to know that lots of people are suffering too."

"If I'm honest, this experiment has changed my outlook on social media," she told Mic. "I want to use it as a platform to connect with people. I'm a blogger and that's a huge part to what I do. If I can make people feel normal or happy, then to me, I'm doing my job correctly!"

That said, despite the recent "trend" in exposing the filtered nature of social media, Sanders' drop in followers speaks to a real conflict: We want to see what's "real" and feel validated in our own insecurities and imperfect lives, yet we also turn to social media to escape and get inspired, to see things that are beautiful.

As Huda Kattan, a beauty blogger with a glossy Kim Kardashian look, told Fashionista recently, "I think that Instagram is only a window into a fantasy of who you are," adding that she's fine admitting she uses airbrushing and has had plastic surgery, yet would feel strange about broadcasting that on Instagram. "It's something that I've been struggling with," she said.

There are probably plenty of others out there feeling the same way about their own highly filtered lives.