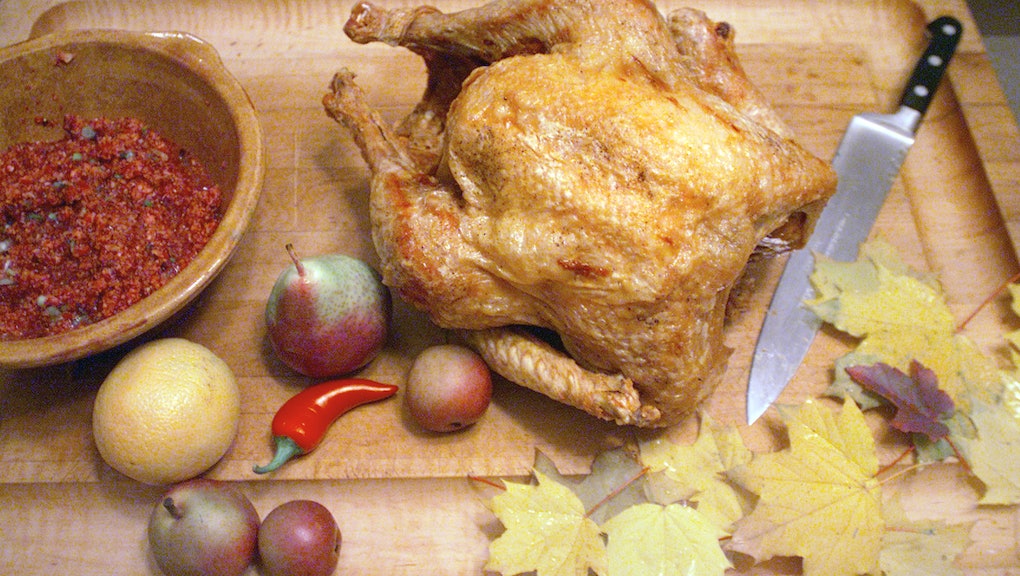 There may be no display of American indulgence more glorious than the Iowa State Fair. Nearly 1 million people attend the annual festival of gluttony, livestock and political grandstanding, which is famous for a massive cow sculpted from butter and various kinds of foods on a stick, among other things.

But what's the draw?

Besides the obvious extremism — food-as-attraction is a thoroughly global phenomenon — there is something especially compelling about fried food. If there weren't, vendors at the Iowa State Fair wouldn't dedicate their time and energy to cooking up the next big fried food fad, and the likes of Jezebel, Mashable and the New York Times wouldn't devote entire stories to the sensation.

Science says it's because of fat and salt. Frying of any kind — deep, pan, stir, sauté — generally involves a boatload of two things we humans tend to love: fat and sodium.

Why are salt and fat so powerful? They're intoxicating to our tastebuds and brain chemistries alike.

According to Adam Drewnowski, a professor of epidemiology and the director of the University of Washington's Center for Public Health Nutrition, and Eva Almiron-Roig, an investigator scientist at Human Nutrition Research, a government agency in the United Kingdom, fat is — unsurprisingly — delightfully tasty.

"Fat contributes to the texture, flavor and aroma of a wide variety of foods," the two wrote in the 2010 book Fat Detection: Taste, Texture and Post-Ingestive Effects. "In general, the most palatable foods are those that are both energy-dense and high in fat content. ... High-fat foods, many containing sugar or salt, have an undeniable sensory appeal and are difficult to resist."

Fat has other effects on our senses too. As Sarah Zhang detailed for Gizmodo, fat has the ability to drastically change the texture of food, and when it makes things crispy — as frying things tends to do — we really, really like it. She pointed to a 2004 study which found that participants who bit into Pringles reported high rates of freshness when they heard the crunching sound through a pair of headphones.

Salt has a similarly palatable appeal — it is one of the five basic taste categories, after all. According to celebrity chef extraordinaire Anthony Bourdain, salt is, well, the salt of the Earth.

"It's what makes food taste good," he told Time in 2010 while discussing the fight to limit our salt intake. "Traditional, intelligent and skilled use[s] of salt [have] become confused in the minds of nanny-state nitwits with the sneaking of salt into processed convenience foods. Nothing else encapsulates the mission of the food ideologues better than this latest intrusion: They desire a world without flavor."

Dietician Jeannie Gazzaniga Moloo reinforced salt's importance to flavor in an interview with CNN in 2010.

"When we stop [using salt] abruptly, there's a dramatic difference in the taste of the food," she explained. "For most people, taste is the most important reason why they eat something. If we were to lower sodium too abruptly, foods just wouldn't taste good. We wouldn't eat them."

While NPR reported in 2012 that "scientists aren't exactly sure how much of our taste for salt is nature, and how much is nurture," what is clear is just how much we love it. A July report from the Centers for Disease Control and Prevention found that from 2011 to 2012, average daily sodium consumption for American adults was roughly 3,592 milligrams — far above the 2,300 milligrams recommended by the Department of Health and Human Services.

Might as well face it, you're addicted to all the bad things. Fat, salt and the delicious crispiness that comes with fried food aren't terrible in small doses. Except as the overwhelmingly gigantic selection of goods at the Iowa State Fair and across the country show, we don't often eat these things in moderation.

It may not be entirely our fault, however. Numerous studies have shown that foods that are high in fat affect the brain in similar ways as other habit-forming substances — cocaine and heroin, for example.

A 2010 study published in the journal Nature Neuroscience found that the "overconsumption of palatable food triggers addiction-like neuroadaptive responses in brain reward circuits" in lab rats —  a similar phenomenon that occurs in drug addiction.

A similar study published in the journal Neuropsychopharmacology in July echoed these findings. A group of lab rats were given a diet full of saturated fat, and after eight weeks, researchers found that their dopamine receptors were impaired. Like in drug addiction, these rats — like human consumers of high-fat foods — became desensitized to the effects.

"This is what occurs in drug addicts, who develop tolerance and need to increase their dose to reach the same amount of pleasure," study author Cecile Hryhorczu told Yahoo. "The same thing happens with high-fat food."