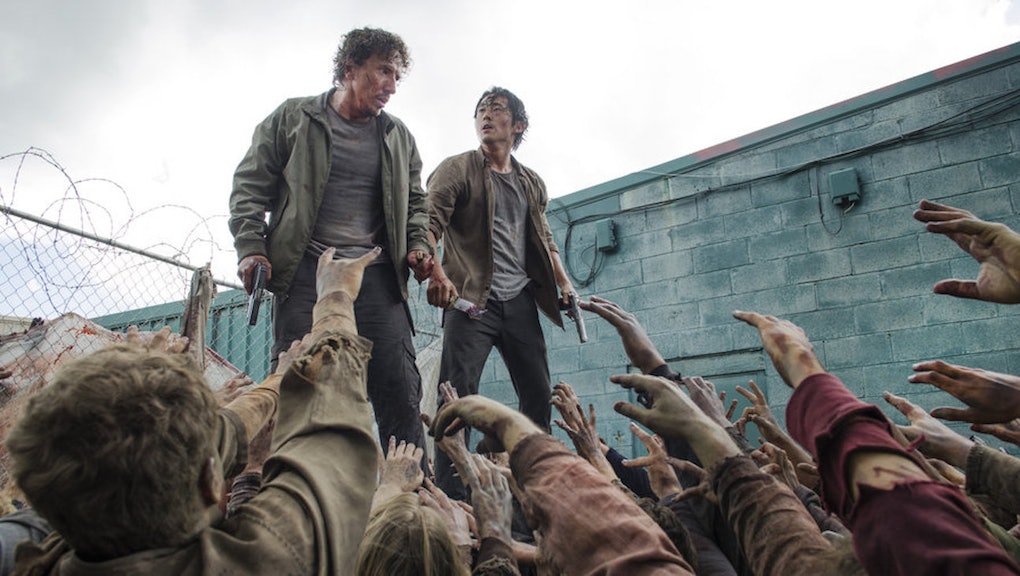 What Happened to Glenn in 'The Walking Dead'? Fans Took to Twitter as Fate Was Revealed

On Sunday night's episode of The Walking Dead, fans finally had their denials, suspicions and speculations surrounding the death of a beloved character confirmed.

Glenn Rhee, a survivor of the zombie outbreak and a fan favorite since the show's first season, was discovered alive during the season's seventh episode, much to the excitement of audiences around the world. Steven Yeun, who plays Glenn, tweeted his appreciation for the fan support:

Many viewers thought Glenn was killed off during the third episode of The Walking Dead's current season, in which the character found himself atop a dumpster with a fellow survivor of the outbreak. The two quickly became surrounded by walkers, causing the other to commit suicide, shooting himself in the head and toppling over into the growing crowd of the dead and dragging Glenn along with him.

However, others were certain Glenn couldn't have been killed, along with Daily Beast noting, "The scene leaves a phantom of ambiguity behind. Was that Glenn's body being torn apart or Nicholas'? (Nicholas' body appeared to land at least partially on top of Glenn's.) The camera never pulls back far enough for us to see the situation clearly and when we cut away, Glenn, for the moment, is still alive (but quite possibly being torn to shreds)."

Of his character return to the show, Yeun said on Talking Dead, The Walking Dead's after show, "I feel relieved, I feel very grateful, I feel so amazed at the response. I feel bad that I couldn't say anything to everyone, family, friends. I'm pretty sure I lost some friends along the way. It's kind of been overwhelming."

Audiences seemed to have a collective gleeful meltdown on social media, praising the show for the revival of their favorite character, and showing their collective Glenn-love: