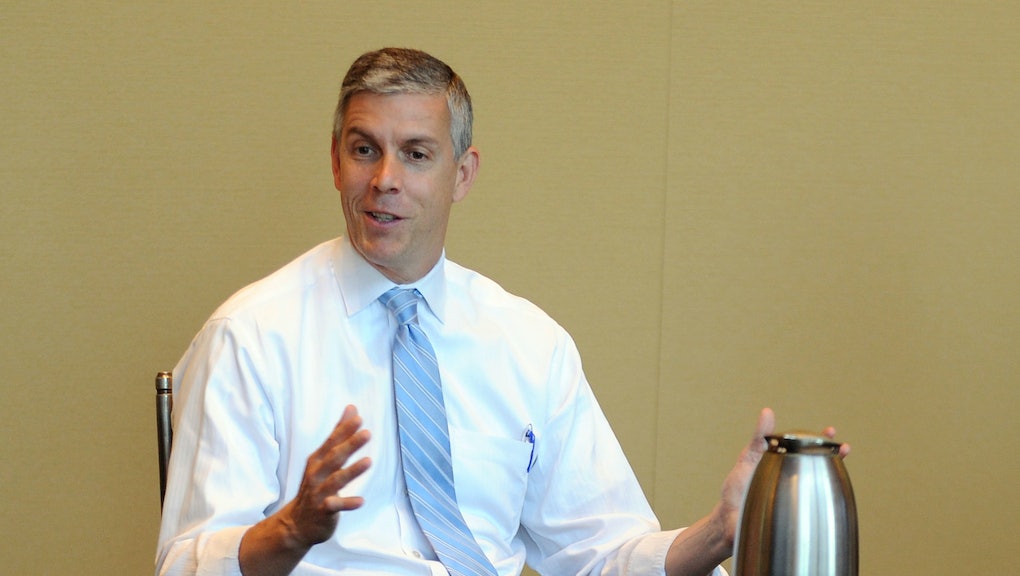 Arne Duncan on Racism on Campus: "We're Struggling. We're Trying to Figure It Out"

The Department of Education is "struggling" to respond to the recent upheaval on college campuses over issues of racial harassment and discrimination, outgoing Secretary of Education Arne Duncan told Mic in an interview Friday.

Duncan, who is stepping down by the end of the year after nearly seven years as education secretary, spoke to Mic just weeks after students at the University of Missouri successfully forced out the president of the state university system, Tim Wolfe, insisting he had not done enough to address instances of African-American students facing racial slurs and systemic racism on campus. The Missouri protests set off a wave of demonstrations at schools across the country, including at Yale University, where students clashed with faculty over what they saw as a culture of insensitivity on racial issues.

Duncan revealed that he had convened an off-the-record meeting of administrators, faculty and students in Chicago to discuss racism on campus, just days before the protests at Missouri brought the issue to the forefront of the national conversation. He said the meeting, which he said included the Missouri student body president, opened his eyes to just how isolated some minority students can feel.

The government's response: Asked what he sees the federal government's role in addressing racism at colleges and universities, Duncan said his department is still grappling with the question and exploring a variety of policy responses.

"Is there policy guidance? We're looking at this very, very hard, and it's not clear there is," he said. "So we're not sure. But we haven't done it because we don't quite know what that play is."

Duncan said he was primarily focused on using his "bully pulpit" to spur action. He revealed that he called Yale University President Peter Salovey on Thursday to thank him for what he said was Salovey's "very significant action" in addressing students' concerns. Last week, Salovey released a detailed plan for addressing the grievances of minority students, several weeks after a series of heated confrontations and demonstrations between students and faculty.

He contrasted Yale's response to that of the University of Missouri.

"I think you have the flipped situation at Missouri, where — again, I don't know all the details, I haven't been there, I'm not an expert — but it sure didn't feel like the leadership was engaged or understood," Duncan said.

In addition to encouraging schools to be responsive to students' concerns, Duncan mentioned the responsibility of the department's civil rights division to enforce laws related to discrimination and harassment.

"We still have the enforcement arm of the Office of Civil Rights," he said. "Since we've been here, we've had [1,000] complaints of racial harassment on campus. That's a staggering number. So that part — we have that responsibility."

Duncan compared the issue of racism on campus to the epidemic of sexual assault at schools across the country, which he said the Obama administration has taken the lead on addressing. He drew a contrast between what success looks like on each issue.

"We spend a huge amount of time on the issue of sexual assault," he said. "We don't do anything perfectly by any stretch, but I really feel we've driven this in the right direction. On that [issue], victory is much clearer. Victory is no more sexual assault. We're not there yet. It's a painful conversation, but the lines are much more easy to comprehend."

He said fighting discrimination was not so clear-cut.

"On this one — what does success look like?" he asked. "What does victory look like? It's harder."

The question of free speech: The recent furor over racism on campus has been met with a debate over political correctness and the importance of protecting free speech, which Duncan characterized as separate from racial harassment.

"We have to make sure that kids feel they belong on campus, that they belong in this world," he said. "And we have some work to do."

Looking forward: Duncan said one of the students' most common demands was a long way from being realized.

"One of the big issues or big critiques, which is really fair coming from the students of Missouri and others, is, 'We want a more diverse faculty,'" Duncan said. "The issue is, the pipeline doesn't exist. We just don't have that pipeline."

He said the department can act to address some issues immediately, but pointed to the ramifications of not investing in policies like early childhood education when discussing how to increase the diversity of university faculties.

Update, 1:20 p.m., Nov. 23, 2015: After this article was published, Duncan's office clarified that the department had received about 1,000 complaints of racial harassment on campus during his tenure — not 3,000, as Duncan stated in our interview. Duncan's office said the department has received about 3,000 complaints when those from K-12 schools are included.