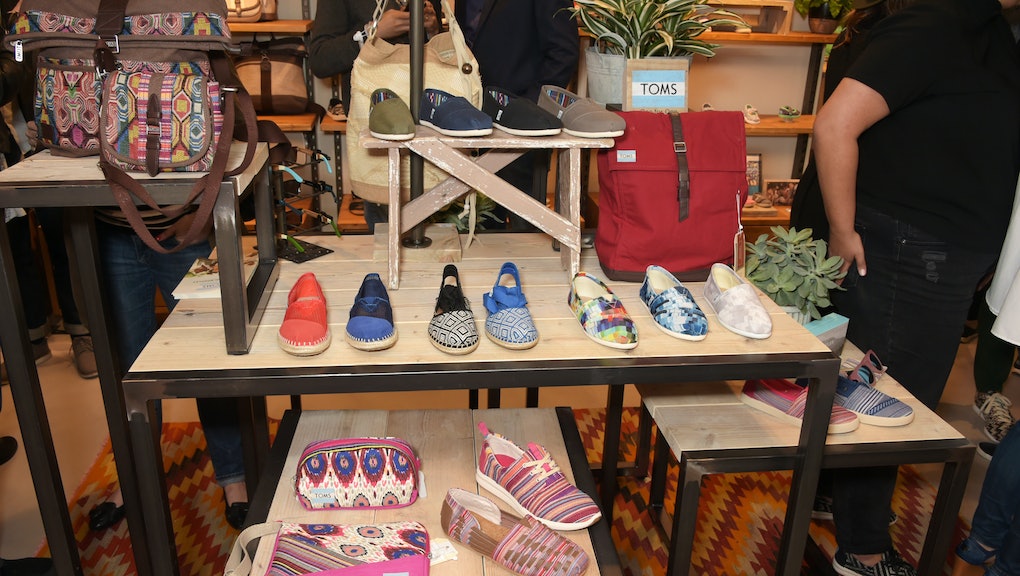 Skeptical About Brands That "Give Back"? You're Not the Only One

The holidays are almost here, which means it's time to impress your friends with your gift-giving skills. Do you buy that obscenely expensive candle they've been lusting over? A gift card to their favorite coffeeshop? Or, do you opt for something a little more charitable?

Brands that "give back" — like Toms, FEED and Warby Parker — have set a modern precedent, shifting charitable giving from the occasional "a portion of proceeds ..." promotion to a part of their corporate raison d'etre. The shift in business model has come with a shift in attitude: A 2014 survey found that about 81% of millennials expect "good corporate citizenship" from brands, in the form of ethical manufacturing, charitable giving or more.

On the other hand, corporate surveys and studies tell us millennials are a cynical bunch. "Skepticism and sophistication are especially pronounced among those born since the early 1980s," the Economist reported in 2014.

How much do we really care about brands that "give back"? Do we really trust companies that say they're giving a percentage of their profits to charity?

Based on a 1,018-person survey of 18-to-34-year-olds conducted by Mic via Google Consumer Surveys, shoppers are indeed skeptical. Rather than accepting whatever a company claims they're doing with their money, 50.9% of responders claim they always research before buying.

Meanwhile, 25.5% say they do trust that companies are being honest, and 23.6% assume that the money isn't really reaching the people or organizations that need it.

This reaction may be simple human instinct — it's hard not to be skeptical of huge corporations claiming to give their money away. It also likely stems from instances of what you could call corporate social irresponsibility. The Susan G. Komen Foundation, for instance, saw a dip in donations after its founder's $684,000-a-year salary was discovered. In 2013, McDonald's was critiqued for not being as generously involved with Ronald McDonald House as it made customers believe.

The distrust is also likely amplified by the sheer volume of "charitable" brands. The concept of "corporate social responsibility" has been around since the 1950s but rose in importance in the late 2000s. "Big companies want to tell the world about their good citizenship," reported the Economist in 2008. Around that same time, smaller companies decided to make responsibility their entire brand: Ethos Water made its way to Starbucks in 2005, while Toms was started in 2006 and FEED launched in 2007. Today, brands that give back in some way are so ubiquitous as to make any effort seem less exceptional or noteworthy.

It may also dissuade us from going out of our way. In another sign of skepticism, according to Mic's survey, 53.9% of respondents said they would not pay more than usual for an item if it had a charitable component.

Young people may be into the concept in theory, but many of us don't love it enough to pay, say, $250 for a burlap bag.

Changing giving models for skeptical times: Ironically, the rise of the "buy one, give one" business model, made mainstream by Toms, reflects the distrust or skepticism over charitable brands. Rather than trusting that a percentage of money is really going toward some foundation, we can visualize our giving in practice.

Just head over to Toms.com, where the website it full of images of children being handed free pairs of shoes. In the case of FEED, when you pay up $250 for a burlap bag, you're paying for 370 school meals in Kenya. There's a specificity in FEED's online descriptions that assures shoppers that, yes, this money is going to the right place.

These models are clear business successes, with Toms valued at $625 million and eyeglass retailer Warby Parker — which donates a pair of glasses for every pair purchased — valued at $1.2 billion. Yet the "buy one, give one" model has also been roundly criticized by those who say simply giving products doesn't address the root causes of poverty, nor do the products support the local economies in a long-lasting way — in fact, they can damage them.

"Lack of shoes is an effect of poverty and not a cause, and giving kids shoes does very little to address the serious problems that these kids face," wrote Laura Freschi of New York University's Development Research Institute.

Which is why it makes sense that, according to Mic's survey, 61.9% of respondents would rather give to a charity directly rather than buying a product that gives back.

What these brands want shoppers to know: They know you're skeptical, and they are too.

MAC Cosmetics' Viva Glam lipsticks have been funding the MAC Aids Fund for more than 20 years now. So far, they've raised more than $300 million and counting, a rep told Mic. But they've been the rare bird that promises to give 100% of all lipstick proceeds to their own AIDS Fund — a fact that MAC's senior vice president Nancy Mahon sees as a key to their success. It's hard to question how much money really goes to the cause when it's an unequivocal 100%.

"The only way that these really work is if it's organic and true to what the brand is," Mahon told Mic. "Since the very beginning, MAC has been giving money to AIDS research. It's engrained in our business and people feel that. They get a good product, always, but they know what we're doing is earnest."

Another model that may instill more trust is a company that clearly starts with a cause that turns into a business, rather than a business that tacks on a sympathetic cause. Founders of the "buy one give one" company STATE Bags, Scot and Jacqueline Tatelman, say that their company took shape only after the pair started the Country Roads Foundation, a nonprofit aimed at helping kids from at-risk neighborhoods in New York City, in 2009.

"We saw a constant reoccurrence of kids carrying their stuff in trash bags or shopping bags across New York City," Scot Tatelman told Mic. "And at the same time, we were seeing a bunch of companies helping kids and doing incredible work. So, we wanted to build a for-profit company with a nonprofit pedigree."

Jacqueline Tatelman added, "We were giving bags before we were ever selling bags." Since its launch in 2013, STATE has donated more than 40,000 bags to kids across the country.

Starting with a cause is familiar to Catalina Girald, the founder of the lingerie brand Naja. Her company is one that addresses the common complaint about "buy one give one" models: It doesn't just donate a product, but rather establishes long-term benefits for individuals in need. Girald built her own factory in Colombia, employs solely Colombian women and offers her employees a benefits package complete with free school meals and uniforms for their children.

This sort of self-sustaining model of giving is incorporated into Warby Parker's giving model, which in fact carries out its "buy one, give one" deal by donating money to nonprofit partners, including VisionSpring, that actually train women and men in developing countries to administer eye exams and sell their glasses locally at affordable prices.

For Mahon and Girald as well as the Tatelmans, a need is the prompt for a brand, not the other way around. For the Doves, Patagonias and Chipotles of the world, the giving is an added bonus. Either way, no matter how a company decides to innovate its giving, it pays to realize that consumers may be skeptical — or that they aren't ready to dish out more cash for the cause.

In fact, they might want to ensure that their young customers know where their hearts really are.