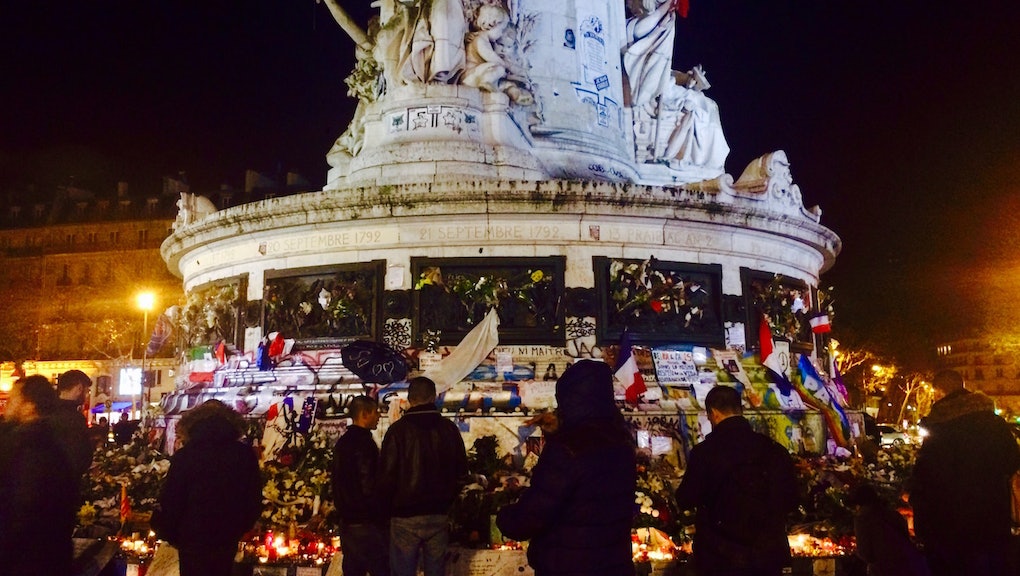 Muslim Refugees Describe What It's Like Living in Paris Today

"I wish I can go back to Libya," Hussein, a refugee living on the outskirts of Paris, told Mic. "It's war, but at least it's better there."

Speaking in Arabic, Hussein was translated by Asma Ajroudi, a Tunisian freelance journalist working with refugees. Hussein feared that his family, who still live in Libya, would be targeted by ruling powers if he was critical of his country, so he requested anonymity.

"Journalists betrayed me," he said, regarding his initial hesitation to talk. "This is why I don't like speaking to them. Everyone says they are here to help and [to] tell our story, but once they get their money they are gone and they never come back."

Hussein said he was imprisoned in Libya for essentially being black.

The government, he said, assumed he was a Gaddafi supporter because some black Libyan rebel groups have formed a pseudo-alliance with pro-Gaddafi forces. Hussein managed to escape and immediately got on a boat to Sicily.

From there, he took a number of buses to Paris; however, the journey was prolonged as he worked to earn money piecemeal.

The worst was far from over. The conclusion of his journey was not as liberating as he'd anticipated. After settling into government-contracted housing for refugees, Hussein quickly became despondent and longed to return.

"We are more tranquil there [in Libya]," he explained. "We don't have to worry about things like papers and where to find food. It's so complicated doing all this paperwork and I don't understand it."

Hussein and his friends would like to work, but they cannot until their paperwork is properly processed by the French government. "We wake up in the morning and have breakfast," he said. "We do nothing the entire day."

Hussein is now gaunt, but he said he was fit and muscular when he left Libya. However, according to a number of refugees living in the complex, the food in the refugee housing is terrible and the portions are very small. "Look at me now," he said. "Here, I can't even go to the hospital. My tooth has been hurting me a lot."

Any maltreatment Hussein had endured while living in Paris was more the result of his being a refugee, he explained, than his being Muslim.

Another man living there, Hakim, fled Sudan after being imprisoned twice for participating in a peaceful protest organized by his university in Khartoum. He also wanted assurance of anonymity before speaking with Mic; as he had similar fears to Hussein. He also said his difficulties living in Paris stemmed from his refugee status, not his faith.

A different story elsewhere: However, outside of Paris, Islamic State's coordinated attacks appear to have galvanized support for the far right — Marine Le Pen's National Front party, specifically, and its concomitant anti-Muslim sentiment.

"It really poses the question that we have been asking, that they [Islamic extremists] will infiltrate the migratory flux that is arriving in Europe," said Florian Philippot, Le Pen's adviser and vice president, according to the New York Times. "It is irresponsible to continue this welcoming of migrants."

There are over 250,000 refugees in France alone, according to the World Bank, not to mention migrants. Makeshift refugee camps, often under railways or near train stations, are frequently evacuated by police, presenting a host of new challenges to those who've fled war-torn countries and violence.

Social isolation and difficulty assimilating in Paris, it would seem, is a universality for all migrants and refugees — it is not especially reserved for Muslims.