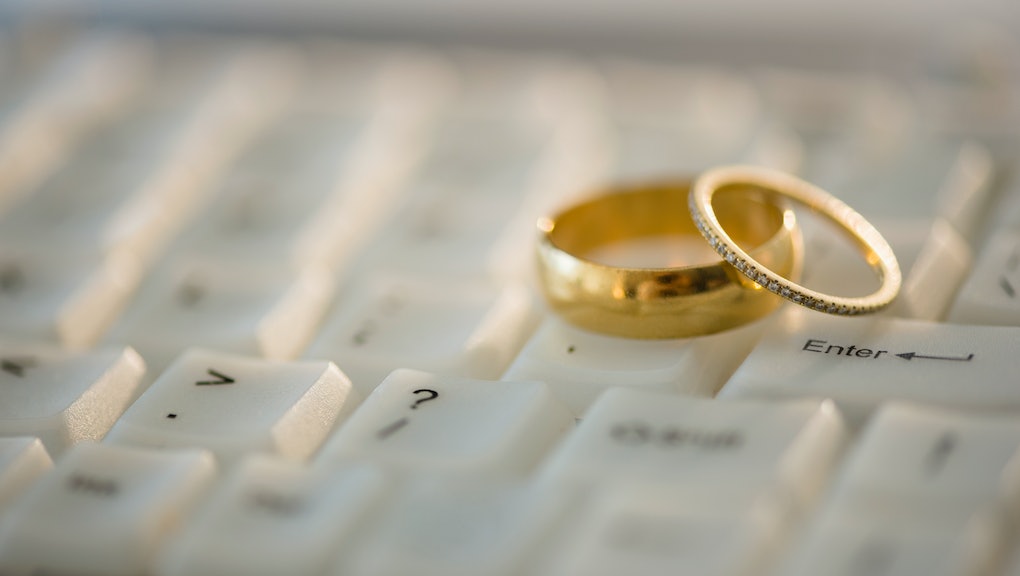 The Latest Wedding Gift for Brides? A Brand-New Email Address

Talia* wasn't sure what to get her friend Rachel for her bridal shower, until she remembered the gift the bride was already getting for herself: a new name. Rachel had decided to take her future husband's name when she got married. It gave Talia an idea.

There was more: "We could all write congratulations emails to her," Talia suggested to the rest of the bridal party before the shower, "for when she finally logs in to her new email address for the first time."

Email addresses are an unusual present for a new bride. But it's also not totally original. According to Jo-Anne Stayner, a public relations consultant for the service I'm A Mrs., which helps newlyweds expedite the name-change process for a fee, gifting brides with new email addresses featuring their married names has become something of a "thing." She's seen it at least a dozen times, she told Mic.

"I think it's going to be one of those little trendy cool new presents in this next bridal season, and then it'll probably fade out," Stayner said.

While it's tough to gauge just how common new email addresses as gifts actually are, it reflects the current trend of brides opting to take their husbands' names, despite a brief trend in women keeping their last names that peaked in the 1990s.

According to a poll by the New York Times earlier this year, an estimated 70% of women decide to take their husbands' last names when they get married, while 20% keep their own and the other 10% hyphenate. (In contrast, the number of men who take their wives' last names is so negligible, "any survey would have trouble picking it up," Penn State University sociologist Laurie Scheuble told the Huffington Post.)

As the New York Times pointed out, despite the great advances feminism has made there's still a great deal of social pressure on women to take their husbands' names. But for many brides, the decision is not quite so political. "So many women are working and they have established careers for themselves, it almost seemed bigger to decide to take his name than to not take his name," Donna Suh, a bride who ended up keeping her name, told the Times.

From passports to Facebook profiles: Whatever the intended message of changing surnames might be, when brides do take their husbands' names, they have to change more than just their legal documents; they have to change their Internet presences as well. In fact, the Daily Beast found that out of a pool of 14 million married female Facebook users in the United States, 65% of women in their 20s and 30s changed their usernames when they wed.

The poll excluded statistics for brides who change their names legally, but not on Facebook or the other way around. Either way, it reflects what we already know: "email addresses are important parts of who we are," including whether we're single or married, Stayner said.

"Some people rely so heavily on your email and your handle, and so you think about those things. 'Is it easy to say? Do I have to explain it? Do I have to spell it out?'" Stayner said. "You're probably telling five people a week what your email address is."

That's why Stayner says she encourages bridesmaids to opt for intentionally temporary email addresses — "like SoonToBeMrsRobertSmith@gmail.com" — if they're going to give brides new email accounts as gifts.

"People are really specific about what they want their email addresses to be," she said.

Our online identities are part of who we are IRL. For many newly married women who choose to change their names, moving over to a different email address is just one of a long list of things that need to happen in order to solidify a corresponding wifely identity. (It's not just passports and driver's licenses that need to be updated: According to Stayner, one of the biggest pains is changing your name on accounts for hotel and airline rewards, the sorts of programs where you've usually been accruing points for years.)

"I changed my name on Facebook, LinkedIn and Instagram almost immediately, because I guess I wanted to symbolically and publicly recognize such a big change in my life," 23-year-old Jenna Stewart, who got married in August, told Mic. "I find it really interesting how I immediately sought to change my name on social media sites compared to my lack of interest or urgency in getting it changed legally. Who I am on social media does contribute to my own sense of identity."

The politics of women changing their names aside, in our increasingly connected world, changing something that feels ubiquitous and unexpectedly personal, like an email address or a Twitter handle, is a powerful statement. That's why bridal parties are doing their part to help new brides speed along the process.

"Nowadays, sadly, it feels like you include your email address as part of your identity," Talia said of her decision to gift her friend a new email address, "so it only made sense that Rachel would make a new account to reflect her new name ... we did it for her, in a fun way."